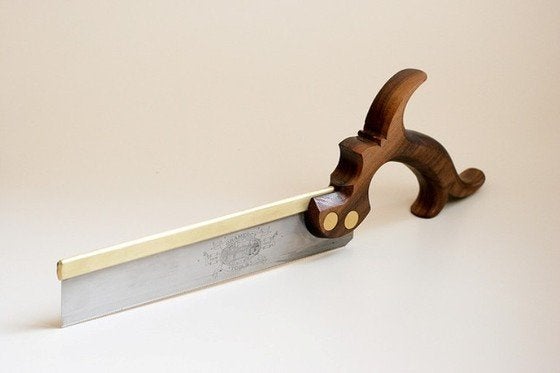 Like the word handsaw, the name backsaw is something of a catchall term. In general, a backsaw is a handsaw with a broad flat blade that has a reinforced back edge that insures the blade remains straight during cutting. The blade is usually of high-grade steel, the handle of wood (or, occasionally, plastic), and the back of steel or brass. Most backsaws have crosscut teeth.

The backsaw’s blades are shorter than the handsaw’s (16 inches is one common size) and narrower (typically, three or four inches wide). The combination of the smaller blade and the brass or steel reinforcement results in added control. I find the added weight of the spine (especially in more expensive brass-backed models) gives a more definite feel to the saw, and means that making a cut requires less pressure, which enhances accuracy.

Backsaws can be used for simple cutoff work or to perform numerous exacting tasks, from cutting small joints to dovetails. Backsaws of smaller sizes are generally used for such purposes, including the tenon saw, dovetail saw, and the so-called gentleman’s saw.

Tenon Saw. In England, woodworkers call what we know as the backsaw a tenon saw. Typically, a saw sold here as a tenon saw has a blade twelve to fourteen inches long with fifteen teeth per inch. The broad blade allows cuts roughly three inches in depth. Some tenon saws have rip teeth, as they were originally designed for cutting tenons out of end grain, which means cutting with rather than across the grain.

Dovetail Saw. This small backsaw is designed specifically to do what its name suggests. Typically, dovetail saws have blades of about ten inches in length with fourteen to twenty teeth per inch. Most dovetail saws can cut to a depth of roughly one and a half inches.

Gentleman’s Saw. This backsaw is the smallest of the breed. Tradi­tionally a tool of the hobbyist “gentlemen” of an earlier era, the gent’s saw has a blade six or eight inches long, and very fine teeth (eighteen teeth per inch is common). Great for cutting dovetails or model work, the gentleman’s saw probably is more at home in the workshop than at the work-site.

Backsaws of several different sizes are also available with special hardened teeth for making cuts in plastics or brass and with offset handles that allow cutting flush with a surface.

Miter Box Backsaw. Backsaws have traditionally been used in miter boxes, too. Such saws are usually larger than standard backsaws, with blades up to twenty-six inches in length. Crosscut teeth are standard.

All About Miter Boxes

The Best Back Saws for Precise Cuts