Learn more about the simplistic and convenient tool for finishing exterior wood surfaces. 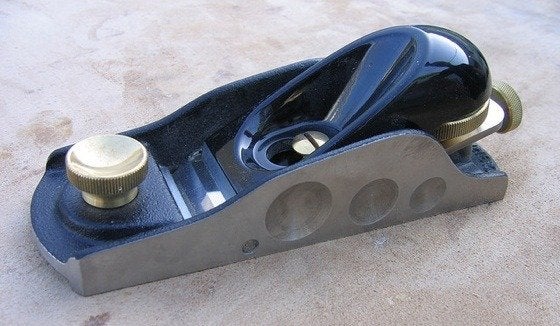 Quality planed stock can be bought from most lumberyards today, but wood that has been dressed on all four sides wasn’t always the norm. Woodworkers only a few generations ago had to plane finished surfaces for themselves every time; as a result, planes both then and now were made in all shapes and sizes.

Even today a fully equipped workshop may well have large jointer or jack planes and smaller molding, rabbet, compass, and bull-nose planes. There are important uses, too, for hand-held power planers and free-standing thickness planers. But it is the block plane that has survived as the most essential plane, a tool that belongs in every traveling toolbox. It’s one of the finish carpenter’s most valuable aids for fitting doors, moldings, and general trimming work.

The block plane is distinguished, in part, by its flat sole. Other common planes, like smoothing, jack, and jointer planes, all have slight curves across their widths. The low angle of its blade (twelve to twenty degrees, depending upon the model) is another peculiarity of the block plane, one that allows it to cut end grain (that is, it can be used to trim off shavings across the grain, unlike planes that are to be used only with the grain). This means that boards that need to be a shade shorter can be trimmed with a few strokes of the block plane, saving trips down the ladder or across the room to the saw. The blade of the block plane, called the plane iron, is mounted with its bevel up.

The block plane is also useful for trimming small stock with the grain, so it can be used for a great deal of any final trim and fitting work. The finish carpenter applying moldings will find the block plane fits nicely in a pocket and comes to hand in a moment for matching one length of molding to the next.

The block plane is small, typically five to seven inches long, though both longer and shorter models are available. The frame is made of iron or brass and the blade of steel. The plane is designed to be used one-handed. The tool fits into the palm, with the fingers fit­ting around the bulbous frame, and the fingertips holding the knob at the front (toe) of the plane. The blades in various models range from about one and a quarter inches in width to one and five-eighths inches.

Block planes are sold in a number of different configurations. Some have their blades set at a very shallow pitch, as low as twelve degrees, in comparison to a more usual twenty or so degrees. The models with the lowest angles work best for trimming plywood, end grain, or other difficult stock.

The simplest models allow only for the blade to be adjusted; it is tightened in the proper position, and then put to use. Others have a lever for adjusting the blade laterally and a screw or wheel for raising or lowering it. On some models, the mouth of the plane can also be adjusted for fine or coarse work. Any block plane that has a sharp blade can be used effectively; the more expensive models simply allow for easier adjustment. Selecting one rather than another is a matter of balancing the desire for a plane that is slightly easier to use with its added cost.

The block plane is intended for fine work. If you need to level a workpiece, smooth a long, wide surface, or plane a drawer slide, the block plane is probably not the answer. Its body is too short to flatten a surface, and with the rise and fall of the waves in the stock, it may even exaggerate the contours.

How To: Use a Block Plane