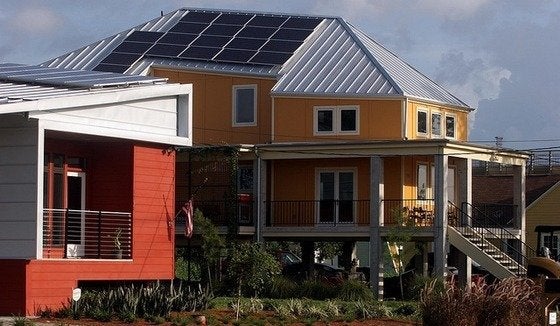 On August 29, 2005, Hurricane Katrina slammed into the Gulf Coast, bringing category-3 winds and tidal surges that devastated scores of Delta communities, including New Orleans, where levee breaches resulted in historic flooding across 80% of the city. The now infamous Lower 9th Ward, one of the city’s poorest neighborhoods, absorbed the lion’s share of the damage. Floodwaters destroyed more than 4,000 homes, and close to 15,000 residents found themselves homeless.

Two years later, FEMA trailers housed entire families and block after block of the Lower 9th Ward still had not been rebuilt, which is why architecture enthusiast and part-time NOLA resident Brad Pitt stepped in. Discouraged by the lack of progress in the wake of the disaster, the actor created the nonprofit Make it Right, pledging to rebuild 150 affordable, green, and storm-resistant LEED-certified houses for working families who had resided in the neighborhood when Katrina hit. “These people did everything right,” said Pitt, when introducing the project. “They went to school, they got jobs, they bought their own homes, and suddenly all that was wiped out.”

Pushing Green Forward
Since its inception, Make It Right has functioned as a huge laboratory for sustainable, eco-friendly building innovations. “We had no idea we’d get such positive reception to the project,” says Tom Darden, Make It Right’s executive director. “We basically set out to build the best houses that we could build, with Brad Pitt asking some architects he respected to participate and design houses for us on a pro-bono basis. As a result, Make It Right’s become an initiative that a lot of people are watching in terms of disaster recovery and sustainable building.”

Indeed, the US Green Building Council calls the 16-block area where Make It Right has focused its revitalization efforts America’s largest green neighborhood of single-family homes, with all of the organization’s dwellings qualifying for LEED platinum certification—the highest designation for energy efficiency and sustainability awarded by the Council.

In 2008, Make It Right finished construction on its first six houses on August 29—the very day an evacuation notice for Hurricane Gustav, another category-3 storm, was issued by the city of New Orleans. “We got to see the durability of the designs tested in the real world,” says Darden. Happily, the houses survived unscathed, a confidence builder for the first families to move into the residences.

As the nonprofit completes its third full year of building, 75 single-family residences and duplexes have been completed. The structures, which feature jutting rooflines, elevated porches, and bright tropical colors, have been built from plans submitted by 21 high-profile design firms run by such notable architects as Frank Gehry, William McDonough, and Hitoshi Abe. All of the products used in the construction of the houses are analyzed using the holistic cradle-to-cradle philosophy, which basically means that all building materials meet strict green standards and are healthy for the people who dwell there. The affordable homes, which cost $150,000 each, currently shelter more than 300 Lower 9th Ward residents displaced from the storm.

Building Smart, for the Next Storm
While no one would wish another Katrina-like disaster on the city, making sure the new houses can weather the next big storm has always been an overriding objective of the Make It Right design process. Since the Lower 9th Ward experienced sustained flood levels of four feet in the wake of Katrina, Make It Right residences are built at an elevation of five to eight feet, a full two to five feet above the FEMA recommendation. “Every time it rains in New Orleans, it floods to some degree,” says Cesar Rodriguez, the organization Construction Service Manager. “So we wanted to help change how people managed water.”

One way is to collect rainwater in 300-gallon cement cisterns (outfitted with filters and pressure pumps), which homeowners can use to irrigate gardens, wash cars—and ultimately reduce their water bills. Capturing the storm water also reduces topsoil erosion on the properties, all of which are landscaped with hardy, native trees, shrubs, and perennials that require minimal to no maintenance. To control localized flooding, Make It Right’s houses also feature highly porous pervious concrete driveways and sidewalks, which reduce storm runoff by allowing rainwater to seep back into the ground.

Recently, the nonprofit has also partnered with the city of New Orleans on an innovative pilot program to evaluate pervious concrete as a possible replacement for major portions of traditional roadways. “We’re in the testing phase right now, but the Lower 9th Ward could have one of America’s first zero-runoff streets,” states Rodriguez. “We get 60 inches of rain a year in New Orleans and it costs the city about two cents per gallon to pump the water over the levee. Pervious concrete roads cost more upfront, but they could potentially save the city 20 to 25 million dollars a year.”

Home Eco-nomics
Besides being good for the planet, Make It Right’s super-efficient houses save homeowners money, sometimes shaving as much as 80% off the pre-Katrina energy bills Lower 9th Ward residents paid. The homes feature maintenance-free 266-gauge metal roofs that absorb less heat (and cut cooling costs) as well as 4-killowatt photovoltaic solar panels, which harness Louisiana’s bright sunlight to generate electricity for the homes. Some residents, according to Rodriguez, pay as little as $12 a month for utilities on a roughly 1,200-square-foot home—all in a city where the average monthly electric bill runs anywhere from $150 to $200.

Inside the houses, close-cell spray-foam insulation ensures a tight seal against the elements, tankless water heaters cut heating bills by half, and low-flow plumbing fixtures and stream-lined Energy Star dishwashers, washing machines, and fridges conserve water as well as energy. Benjamin Moore’s zero-VOC Natura and Aura paints improve indoor air quality, while formaldehyde-free plywood cabinets from Armstrong and Cosentino’s ECO countertops—made from 75% post-consumer glass, porcelain, and stone scraps—come standard in kitchens and baths. And, in true cradle-to-cradle fashion, the recycled Green Edge carpeting that softens the floors can be recycled yet again when it’s in need of replacement. (Shaw, Green Edge’s manufacturer, even retrieves the old carpets at no additional cost to the customer.)

75 Houses Built—75 to Go
As he looks to the future, Tom Darden hopes Make It Right will become a national model as well as a resource for other groups and communities considering low-income green building and cradle-to-cradle sourcing. While it’s a common assumption that homeowners need deep pockets to build green, Make It Right has proven that adaptable, durable, high-quality LEED-platinum houses can be constructed at a competitive, market-rate price point. “We think the principles we’ve applied to drive down the cost of our houses can be implemented everywhere, not just in communities that have experienced a natural disaster,” Darden says. “If all goes as planned, we’ll work ourselves out of a job at some point and everyone will start designing homes that reach Make It Right’s level of green and sustainability.”

Nevertheless, the human quotient remains the true bottom line for Darden and Make It Right. “The real success story as far as I’m concerned,” notes Darden, “is seeing these families move into an affordable green home that will shelter them safely through the next storm.”

To learn more about Make It Right, visit makeitrightnola.org

9 Clever Things You Can Do with a Rubber Band