How To: Use a Rafter Square

Using a square to raise rafters is a relatively simple process. 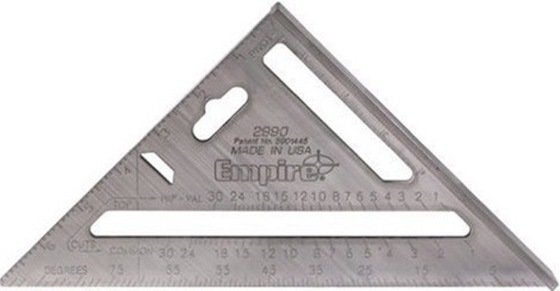 The rafter square is designed to take advantage of the geometric laws of the right triangle. For example, the right triangle has, by definition, one ninety-degree angle. The angle at which the blade and tongue of a rafter square meet is also a ninety-degree angle. Thus, if you position your square with one leg level, then the other is always plumb. In building a rectilinear structure, this simple constant has lots of applications.

One is the planning and layout of rafters.

Roof pitch isn’t traditionally specified in degrees (as in “This one’s a forty-five-degree roof” or “That’s a thirty-degree pitch”). Rather, the slant of a roof is specified by a ratio, namely, the relationship between its rise and run.

Whatever the pitch of a roof, it is specified as unit rise (vertical) over unit run (horizontal). The run is always twelve inches; the rise is determined by the builder or architect on the basis of taste (do you prefer the profile of the tall or low roof pitch?) and of practical considerations (a steep roof sheds snow more efficiently but it’s more hazardous to work on). So a roof pitch is expressed by such ratios as twelve over twelve or six over twelve—meaning that in any given foot of horizontal distance the roof with a twelve or a six rise will rise twelve or six inches, respectively.

If all this has your head spinning, console yourself with this: the rafter square is a lot less complicated than the theory that makes it work. That’s the beauty of it. To lay out a rafter, in fact, all you have to know is the ratio of the pitch. Then you position your square on the rafter so that the twelve-inch mark aligns with the bottom edge of the rafter; you pivot the square on that point so that the point where the blade and the rafter intersect is the same as the rise of the roof; and, thanks to the magic of ancient geometric figurings, you have your plumb cut.

You can use the rafter to mark off your plumb cut (where the rafter butts the ridgeboard), the “bird’s mouth” (the angled cut where the rafter bites into the wall), and the tail cut (the rafter’s lower end). And a simple gable roof is suddenly within your skills. More complicated roofing designs involving hips and valleys and compound angle cuts are not too dif­ficult. When you buy a new square, it’ll come with a book­let that will take you through the various steps in those processes.

Advertisement
TAGS:
TOOLS
HAND TOOLS
HOW TO
USE
More From Bob Vila

The Best Combination Squares for Your Workshop