How To: Use a Block Plane

These simple steps will help you operate the block plane to its best use. 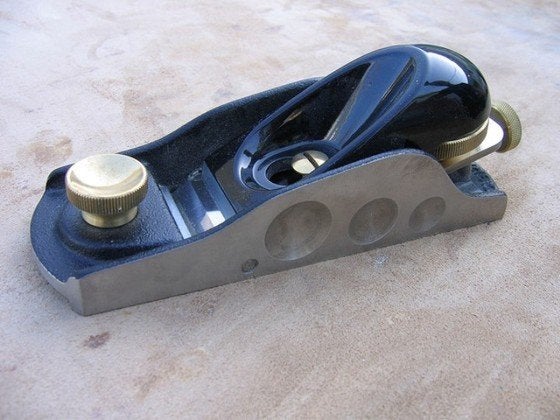 Follow these simple guidelines for working with a wood plane and you are sure to have superior results:

Assume the Position. One great virtue of the block plane is that it is used one-handed, so you can plane a piece almost anywhere. But before you try planing on a ladder or in a cramped space, get familiar with the tool on a workbench, fixing the piece firmly in place.  Whenever you use the block plane, assume a balanced stance, with the workpiece held firmly with one hand, the plane in the other (the workpiece-hand should be out of the intended path of the plane – or the trajectory it will take should your hand slip). You’ll also find that planing horizontally or even downhill is a great deal easier than trying to plane upward.

Adjust the Plane Iron. On a piece of scrap that resembles the workpiece you’ll be planing, take the plane on a trial run. If the blade extends too far through the mouth, it will jam, choking on great chunks of stock. If it’s withdrawn into the frame, you’ll remove no shaving at all. Adjust the plane so that thin shavings are removed.

Let the Planing Begin. Hold the plane flat to the surface. Let your fingertips guide the plane. Be firm, but don’t force the tool.

Try Working Diagonally. The block plane is often most effective when held at an angle to the workpiece, especially when trimming end grain.  When planing end grain, plain from each edge to the middle – a full stroke across the end grain is likely to split the wood at the edge.

Like the kangaroo that carries her young around in a pouch, many a finish carpenter carries his best friend, the block plane, around in his back pocket. Before you know it, the block plane may be a valued collaborator of yours as well. Remember, there are those who say that what separates the skilled from the semi-skilled carpenter is the ability to use a plane well.

Advertisement
TAGS:
WOODWORKING
HOW TO
USE
More From Bob Vila

How To: Use a Hand Plane
Advertisement