Use calipers to transfer measurements, especially in situations where applying a rule to a workpiece is difficult. 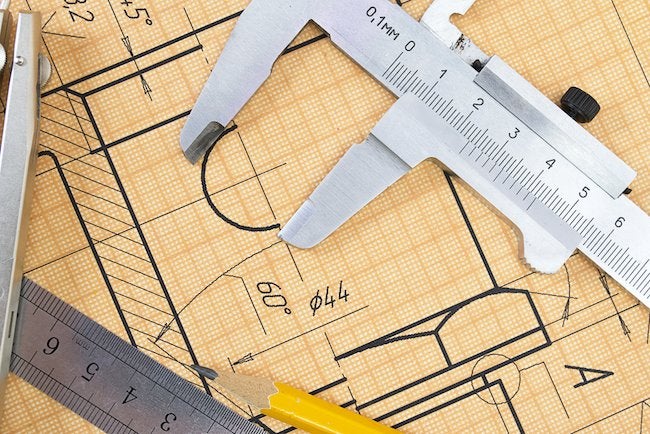 Calipers and their near relations, the compass and dividers, have been in use at least since Roman times. While their designs are of a certain age, they have by no means outlived their usefulness. The transferring of measurements is their primary job, especially in situations where applying a rule to a workpiece is difficult (as with curved workpieces, for example).

Calipers range from relatively small (a few inches in height) to quite large (some tradesmen of the past used calipers three feet or more in height). They may be of wood or iron, but usually are of steel. Generations of toolmakers and craftsmen have made them for specific purposes, ranging from the tiny ones for precision jeweler’s work to giant ones that are employed at foundries.

The legs of a pair of calipers are spread or brought together in order to match a dimension being measured. The calipers can be set to a given dimension from a rule, scale, or pattern, then used to check the workpiece being shaped. They can also be employed in the reverse process, adjusted so that the feet drag slightly when drawn over (with outside calipers) or inside (inside calipers) a workpiece. Then the distance between the feet is measured with a rule.

Slide Calipers. At a glance, there is something of a resemblance between slide calipers and a monkey wrench. Both have a fixed jaw at the head, with a lower jaw that slides along the tool’s spine. The lower jaw in a pair of slide calipers may have a nut that clamps it in place, rather than the worm drive of a monkey wrench; the calipers also have a scale along the slide- that indicates the space between the jaws. Slide calipers are generally small, most having the capacity to measure workpieces a maximum of somewhere between three and twelve inches.

As with micrometers (below), there are slide calipers and then there are calipers. There are digital readout calipers and dial calipers (on which the dimension is read from a dial). The costs also vary: about five dollars will buy you a basic pair of slide calipers, one quite adequate for occasional needs in a woodshop. For a machinist concerned with high tolerances, up-market models sell for two hundred dollars and more.

Vernier Calipers. Named after Pierre Vernier, an early seventeenth-century French mathematician and inventor, Vernier calipers are slide calipers with a very precise scale. They come in a range of sizes, from smaller models measuring a maximum of six inches to large ones with jaws that open to five or six feet.

Micrometer. Another variety of calipers, the micrometer is a precise engineering tool. It is used for high-tolerance measurements, especially in machining metal elements.

Instead of slide jaws, micrometers have a fixed pair of jaws with a spindle that extends from the handle, reaching across the mouth or opening of the jaws. The opposite jaw is a fixed stop called an anvil. As the spindle is adjusted, a scale on the barrel of the micrometer is read.

The Best Digital Caliper in 2022
Advertisement

7 Essential Measuring Tools for Any Job

How to Use a Lathe for Woodturning

All About Miter Boxes