Bench planes are used for smoothing and squaring surfaces. 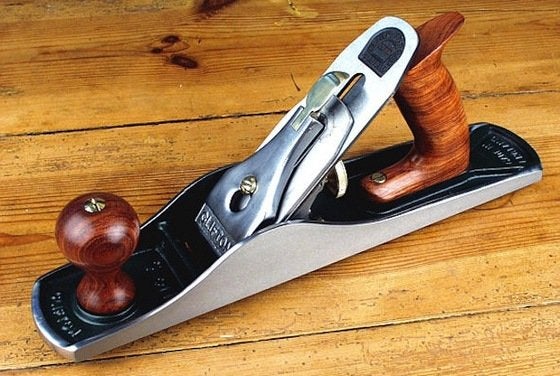 Bench planes are a loosely linked category of flat-bottomed planes. The cutting irons are usually set at a forty-five-degree angle (“common pitch”), though for hardwoods the angle traditionally has been a bit steeper, perhaps fifty (“York pitch”) or fifty-five degrees (“middle pitch”). The bench planes, along with the smaller block planes, are used for surface smoothing and squaring. Other planes perform special types of shaving work, such as shaping moldings or rabbets.

Metal bench planes all have the same basic elements. There’s the main body of the plane, with its handle at the rear and a knob up front. Within the frame is a sloping cavity into which the plane iron is inserted. The plane iron, consisting of a blade and cap, is fastened to the frame with a lever device. The blade does the cutting, the cap deflects the chips upward. The cap is screwed to the blade.

The bottom of the frame is called the sole. The opening in the sole is the mouth, the front the toe, the rear the heel. An adjustment nut or wheel raises or lowers the blade and a lateral adjustment lever shifts the blade from side to side.

Wooden bench planes are simpler than their metal brethren, generally box-shaped, and square in section. A handle extends upward from the rear of the plane. Just forward of center, the plane iron is held in place with a wooden wedge, with the bevel of the blade facing downward. The bodies of wooden bench planes tend to be made of American beech. The cutting irons can be single, but more often are capped. They are mounted bevel down, as in metal planes.

The subgroupings under the general heading of bench planes include the jointer, jack, and smoothing planes. All are to be found with both wooden and metal bodies. They are similar in design but differ in scale.

Jointer Planes. The jointer is the largest, typically more than twenty inches long. The smoothing planes are the shortest, usually seven to nine inches long. Sometimes called try, trying, or long planes, these are handsome and substantial tools. Wooden jointer planes tend to be very long, often twenty-eight or thirty inches and occasionally longer. Iron jointer planes are typically shorter, in the twenty-inch to two-foot range. The metal jointer plane’s body is much lower, too, with a dosed wooden handle that stands proud of the base. Jointer planes were—and are—used to true the edges of long boards before they are joined to one another. They were once also used to smooth wide stock, though that task is rarely assigned them today.

Jack Planes. These are essentially smaller versions of the jointer planes, typically a foot to fourteen inches in length, made up of the same elements in essentially the same proportion. Jack planes are used for sizing lumber and boards, but they are really all-purpose planes that can be used for almost any planing job.

Smoothing Planes. The wooden version of this smallest of the bench planes has no handle, and is sometimes referred to by the rather ominous name “coffin plane” (there is a certain resemblance, thanks to the curvature of the smoothing plane’s sides). The shape fits comfortably into the hand.

The plane iron, too, is curved, almost imperceptibly convex at its tip. This slight curve suits the plane to the task its name suggests, smoothing boards (were it absolutely flat, the corners at the edge of the blade would catch the stock being smoothed).

The Best Hand Planes of 2022
Advertisement

Why Every DIYer Needs a Thickness Planer

The Best Bench Grinders for DIYers

How To: Store Your Tools in Your Workshop (and Keep Them Accessible)