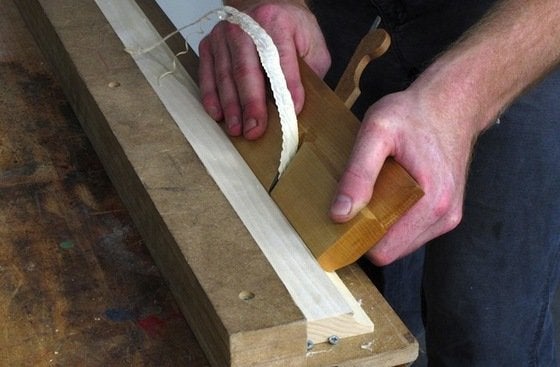 For woodworkers with old-time tastes, using a molding plane is like drinking a vintage port. The planes are not for everyone, but for those who favor them, they offer a unique satisfaction.

Tool-world modernists argue, “Who needs ’em? My router’ll do everything they can.”

The traditionalists’ rejoinder is along the lines of “Maybe you think so, but I’ll take the quiet of my workshop and the crisp lines of my moldings any day.”

I think there’s room for both kinds of tools in a workshop, though I must admit that when it comes to production work, the molding plane is obsolete, without question. But if you haven’t run a molding or two, seen the thin shaving curling out of the plane, and felt the tautness of your forearm muscles after driving a hand plane… well, I guess you don’t know what you’re missing.

Molding planes are used to cut wooden moldings. The planes themselves have bodies of wood, often of beech, birch, hornbeam, boxwood, or even oak, with iron or steel blades. The plane irons are held in position by wooden wedges.

The sole of the plane body reveals everything about a molding plane: Its profile is the reverse of the shape that the wood on which it is used will take. The iron is ground to the same profile, though the cutting edge extends only partway from the right-hand side (on most planes) to the left. The right-hand side is a rebated groove, while the remaining portion of the stock acts as a fence and depth gauge to guide the planing process.

Another, subtler guide is found on the toe of many molding planes. It is an incised line that is, in essence, an instruction to the user as to how to position the plane. Called a spring line, it should be kept perpendicular to the workpiece, even if this means that the stock of the molding plane will not be. To ignore that line is, in most cases, to flatten the profile of the molding almost beyond recognition.

The craftsman of yesterday had a wide array of molding and related planes. Among them were purpose-made tongue-and-groove planes for shaping the edges of boards; these planes were sold in matched sets. There were hollows and rounds, planes with soles (and matching blades) shaped, respectively, in concave and convex profiles. A set of bead planes was de rigueur in almost all woodworking shops in the waning days of the preindustrial age. (A bead molding, semicircular in section, was a pleasing way to finish a joint between two parallel pieces of wood, as in wainscoting or door panels.)

Those planes were just the foundation for the extraordinary variety of planes that were made in the eighteenth and nineteenth centuries, planes responsible for the wonderful moldings found in early American homes. The ogees (moldings with an S curve) and the ovolos (quarter-round), and dozens of other profiles and combinations give antique houses much of the character we so admire today.