Axes and hatchets have more than a few uses in preparing stock for use on the shop floor. 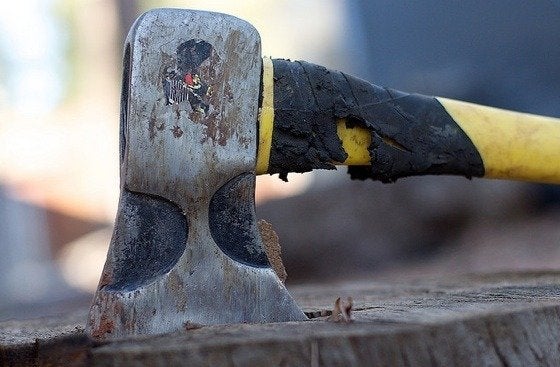 Axes goes back into prehistory almost as far as the hammer. The axe, too, started out as a stone, but some clever Stone-Ager then lashed a handle to it. Next a slot was made in the handle and the head of the tool slid through it. Probably the next advance was a copper head.

This evolution didn’t occur overnight, of course, but over the millennia a recognizably modern tool evolved, thanks in large part to tinsmiths of the Bronze Age. They were the ones who figured out that putting a hole in the metal head of the tool, rather than sliding a solid head through an orifice sliced into the wood or bone handle, would substantially increase the tool’s usefulness and durability.

An axe in the workshop, you ask? Maybe not in the workshop, actually, but the axe and its sister tools, the hatchet and the splitting maul, may have more than a few uses in preparing stock for use on the shop floor, or even keeping the place warm.

There are many kinds of axes, old-fashioned and new-fangled. The broad axe has Old World origins. Sometimes called a hewing axe, the sideways mounting of the head suits the squaring required in trimming a tree trunk into a beam.

The felling axe is, however, the most generally useful (and, very likely, the tool you picture in your mind when the word axe is uttered). It’s regarded as an American innovation (the early settlers had a great many trees to chop down, a lot of which they turned into the wooden houses that dominate our landscape). The tool has a wedge-shaped head that aligns with its long handle, which may have a slight, graceful curve at the base. The heads on American axes tend to be thicker than European variations, but in America alone there have been many regional adaptations.

The axe’s cutting edge is beveled and rounded. The blade thickens in a wedge shape: The edge cuts into the wood being struck, but the thickening of the head behind splits the cut open.

These days all of these tools are sold not only with the traditional hickory handles, but with fiberglass shafts. Heads vary in weight, typically from three to six pounds. The length of the handle varies with respect to the weight of the head, with the lightest axes having handles roughly two feet long and the heaviest heads three-footers.

Hatchets. Much as I admire the axe—its combination of grace and power has an atavistic appeal—the hatchet is probably more useful in the average workshop. It’s a splitting and shaping tool, one proportionately smaller than the axe. The head is usually between one and two pounds, the handle fourteen to sixteen inches long. The head is steel, the handle hickory or ash.

A useful variation on the hunter’s hatchet is the so-called half-hatchet, a tool with a hammer face on one end of the head and an axe head on the other. Unlike the traditional hatchet, its blade is not rounded but straight, which makes it handy for getting into corners for certain kinds of architectural work like trimming shingles and lath, as well as for splitting lumber for wedges and some rough shaping.

Mauls. Got a woodstove? A maul will make keeping it full of cordwood a breeze. It’s safer and more efficient than an axe, with a dull blade (that’s right) because the weight does the work, with the broad wedge shape doing most of the actual splitting of the wood.

What Would Bob Do? Removing a Tree Stump
Advertisement

New & Notable: 10 Gadgets to Tech Out Your Garden

The 10 Best Buys to Make Yard Work No Work