Fasten wood in tight, precise joints with a jointer. 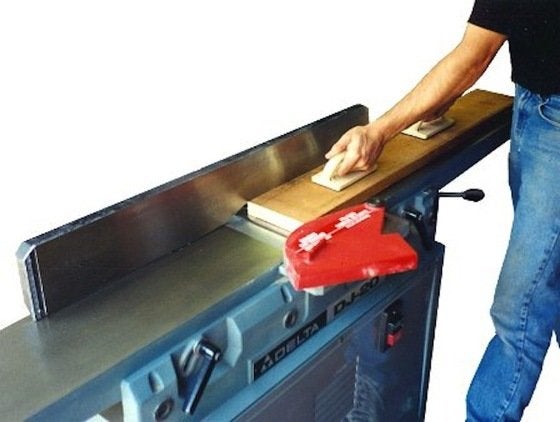 The very name speaks to the nature of this tool. If you aspire to be a joiner, a person who specializes in fastening pieces of wood in tight, precisely shaped joints, then the jointer probably has a place in your shop. If your workshop will be used to work metal or do miscellaneous fix-it jobs, then this imposing power tool would probably be a waste of space and money.

Often called the jointer/planer, it’s used to plane the edges, faces, and ends of boards or panels. In fact, the jointer essentially is a powered, stationary-version of a bench plane, but is faster, more flexible, and very accurate when properly set up. Jointers can be used to bevel and taper stock, and some models will also cut rabbets and tenons. In shops with limited space, a quality jointer can do the job of the surface planer, too.

The jointer consists of a worktable through which the revolving blade (called the cutterhead) of the tool protrudes. A motor, via pul­leys and a belt, drives the cutterhead from below. The cutterhead has two or three knives attached to it with set screws. The width of the knives determines the size of the jointer. Four- and six-inch sizes are usual in home workshops, though machines up to twenty-four inches are to be found in industry. Midsize planers have power ratings in the three-quarters to two horsepower range.

The design of the jointer’s worktable distinguishes this machine from others in the workshop. Rather than having a single, level table-top like a table saw or band saw, the jointer table has two separate work surfaces, one on each side of the cutterhead. The left-hand surface is called the outfeed table or bed, the right the infeed table.

In setting up the jointer/planer, the blade height is adjusted so that its highest point is precisely the same as the outfeed table to the left. The offset between the infeed table and the top of the blade deter­mines the depth of the cut the jointer will make, typically between a thirty-second and an eighth of an inch. Cutting more than an eighth of an inch is likely to produce kickback, especially if the wood has knots. For end or edge cuts, limit the cut to a sixteenth of an inch.

An adjustable fence rests at the back of the table. A blade guard covers the cutterhead but shifts aside as the workpiece is passed over it.

The worktable on a jointer needn’t be large, but keep in mind when deciding which model to buy that the larger it is, the more stable will be the workpiece being shaped.

Using the jointer. Whatever the cut you are making, apply pressure against the piece in three directions: one, down onto the table; two, against the fence; and three, right to left, in the direction of the cut.

The rate at which the workpiece is fed to the cutter is critical. Too much pressure increases the risk of kickback, as well as producing un­even cuts. Working at too slow a rate may result in burn marks on the wood.

To edge-plane a piece (the operation is sometimes called jointing), the stock is fed through on its edge, with one of the faces of the piece held flush to the fence. Use a pusher unless the stock is six inches or wider. Again, don’t try to remove more than an eighth of an inch from the stock at a pass.

Inspect the edge after the first pass: If the grain has chipped, you were probably planing against the grain. Reverse the board and feed it again. When the fence is set at an angle other than ninety degrees for beveling edges, the operation is much the same as jointing.

To surface the face of a workpiece, feed it through with an edge flush to the fence, the face flat to the worktable. Use push blocks or a push stick, keeping your hands clear of the cutterhead at all times. In­spect the piece after planing. Again, if the grain has chipped, you were probably planing against the grain. Reverse the piece and plane again.

To plane end grain, present the workpiece as you would for jointing an edge. However, when planing end grain, lift the piece straight off the table after you’ve planed no more than two inches. Then reverse the piece, front to back, and plane the full end grain. This procedure will avoid chipping the end grain.

Some jointers will also cut rabbets. Those models have an adjust­able ledge at the front of the infeed table. It is set to the appropriate height, and the fence is moved forward so that the exposed cutterhead is the width of the rabbet to be rut.

Jointer Safety. This is a powerful tool, one that has seriously injured many experienced woodworkers. Respect the raw power of these blades by using push blocks or a push stick, especially when shaving pieces shorter than eighteen inches, to propel the workpiece across the cutterhead. Push blocks or shoes are positioned on top of the workpiece to hold it firmly atop the blade, and the push stick drives from the rear.

Don’t try to machine workpieces twelve inches or less; it’s just too dangerous. Plan ahead and try, if possible, to surface stock as longer, wider pieces. Then rip or cut them to the desired sizes.

Don’t stand behind the machine or in the line of the cut but to one side or the other of the cutterhead. Hold the stock tight to the fence. Don’t remove the guard.

Again, don’t try to plane more than an eighth of an inch from a workpiece in a single pass. If more stock needs to be removed, do it in two or more passes.

The Best Benchtop Jointers of 2022

Why Every DIYer Needs a Thickness Planer