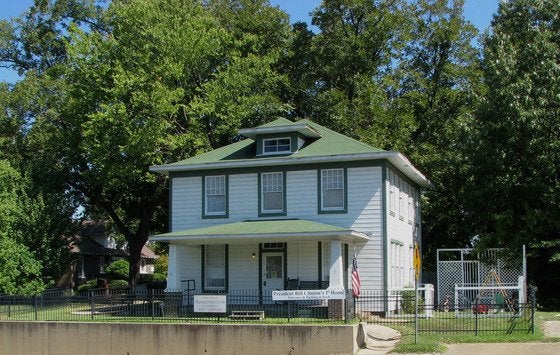 For one, its farmers grow whopping great watermelons. The biggest of them, in fact, weigh a good deal more than does the town’s other notable product, namely, favorite son Bill Clinton. He was born within Hope’s borders on August 19, 1946.

To be frank, the place is no Monticello. Built in 1917, the home is a classic foursquare, with three bedrooms upstairs and a living room, kitchen, and dining room down. If it isn’t a memorable architectural monument, its efficient design, with a squat pyramidal roof with wide overhangs, and the generous porch out front, conveys a sense of southern comfort.

Bill Clinton’s Early Years
The architectural story isn’t really the point here. When newborn William Jefferson Blythe III left Julia Chester Hospital a few blocks away, he and his mother, Virginia Dell Cassidy Blythe, arrived on her parents’ doorstep. A single-mother, Virginia had been widowed at the death of her husband three months earlier in an auto crash on a Missouri highway. For the next four, formative years, Billy lived with his grandparents, as his mother came and went (she was completing her nurse anesthetist training in New Orleans).

Both Edith and James Eldridge Cassidy would help shape their grandson’s character, but it was “Papaw” that Clinton’s remembers as shaping his values. In the dedication of his autobiography, My Life, written more than half a century later, former President Clinton cited Eldridge Cassidy as the man “who taught me to look up to people others looked down on, because we’re not so different after all.”

Visiting Bill Clinton’s Birthplace
On a recent visit to the house, which was restored by the Clinton Birthplace Foundation prior to the Park Service taking possession, the overwhelming sense was that Ozzie Nelson might walk through the door at any moment. Or even Hopalong Cassidy, television’s first cowboy hero. Young Billy’s boyhood worship of “Hoppy” culminated in a broken leg at age five when he tried to clear a rope in cowboy boots, and there’s a black cowboy hat on his bed in the restored house.

Looking beyond the atmospheric memorabilia, the visitor learns something of the character of Hope, Arkansas during Clinton’s earliest years. His grandfather’s nearby general store sat on a fault line between the white and African-American communities; in segregated Hope, his store was among the few places where the races mixed freely. As presidential nominee Bill Clinton told America in his acceptance speech at the 1992 Democratic convention, “when his customers, whether they were White or Black … came in with no money, well, he gave them food anyway. He just made a note of it. So did I.”

Young Bill Blythe soon moved on with his mother and new stepfather to a bigger place — Hot Springs, Arkansas — and adopted his new father’s surname. But he often returned to Hope to summer with his grandparents and, in spirit, the place certainly informed his later life.

Best Gifts for Grads That Say ‘You're On Your Own Now’