FDR’s “Real” Springwood on the Hudson

The fabled home of an unforgettable political family, stately Springwood endures with vitality to match the Roosevelts' legacy. 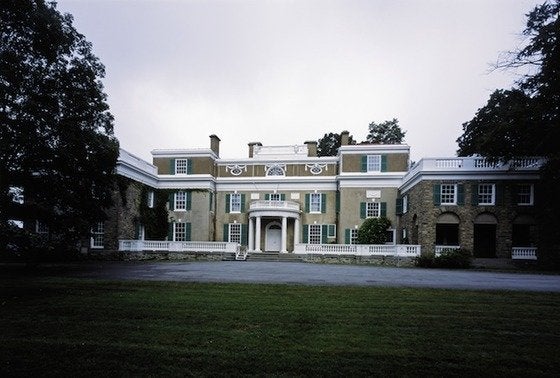 With the release of Hyde Park On Hudson, a Focus Features film starring Bill Murray as President Franklin Delano Roosevelt—moviegoers are treated to a rare, albeit theatrical, glimpse of FDR’s life at Springwood, the Roosevelt family home in Duchess County, NY. While the movie was shot on location in England and not at the historic property, Springwood remains unique among presidential sites, as revealed in this excerpt from Houses of the Presidents (Little, Brown; November 2012) by author and historian Hugh Howard.

BY 1915, FRANKLIN DELANO ROOSEVELT’S PUBLIC CAREER followed the path of his idolized cousin, Theodore. Both Roosevelts had been elected to serve in the New York State Senate and received appointments to be assistant secretary of the navy. Franklin’s private life was proving productive, too. In 1905, against his mother’s wishes, he married Teddy’s niece, Anne Eleanor, and she birthed five children in ten years. Another was expected.

With his large ambitions and growing family, the need became obvious: The house known as Springwood, located at Hyde Park, New York, simply had to be expanded.

His father had died almost fifteen years earlier, but his mother, Sara Delano Roosevelt, remained in charge at Springwood. Over the years minor changes had been made to the house (a staircase was shifted in 1892 and electricity arrived in 1908), but a more radical rethinking was required. Together, mother and son commissioned a respected New York architectural firm, Hoppin and Koen, to prepare a plan. The revamped house that resulted mingled the architects’ beaux arts training and Franklin’s fondness for elements of the Dutch colonial design native to the Hudson Valley.

The raising of the existing roof allowed for the construction of a large playroom. At either end of the original structure new fieldstone wings were added. The north addition contained a common room for the servants and a schoolroom on the first floor, along with five servant bedrooms and a bath above. The south wing enclosed a spacious library down, three bedrooms up. The new plan retained the old configuration of the principal rooms, but the house was doubled in size.

Sara Delano Roosevelt paid the bills and managed the year-long renovation, which saw removal of the old clapboard cladding and the application of gray stucco for a look more compatible with the coursed rubblestone of the new wings. Other decorative touches added formality to what became a more imposing house, with a columned portico and a fanlight over the door. A vernacular Victorian dwelling reemerged as an orderly and symmetrical statement that spoke for the means and expectations of the man of the house.

In the years that followed, Roosevelt’s rise seemed likely to continue. In 1920 the Democrats named him their vice-presidential candidate, though he and his running mate, Ohio Governor James M. Cox, lost by an overwhelming margin to the Republican pairing of Warren G. Harding and Calvin Coolidge. Roosevelt returned to his law practice but, less than a year later, on vacation at his cottage on Campobello Island, off the coast of Maine, he took to his bed. The diagnosis was polio and, for much of the next seven years, Roosevelt worked at his rehabilitation. He would never regain full use of his legs and, wary that people would think him unfit for public office, he attempted to appear more mobile than he was, delivering speeches while standing (he wore iron leg braces) and taking pains to avoid being photographed in his wheelchair.

Eventually, he reentered politics, and, in 1928, was elected governor of New York. After two terms in Albany, the fifty-year-old Roosevelt pledged at the Democratic convention in 1932 that, if elected president, he would deliver “a new deal for the American people.” That November he won a national mandate, carrying forty-two of the forty-eight states. He would win a total of four presidential elections as he sought to lead the nation out of the Great Depression and, eventually, to victory in war after the Japanese attack on Pearl Harbor, which he described as “a date that will live in infamy.”
Advertisement

Historians and biographers have wrestled with the popularity of the politician and the complex personality of the man. Franklin Roosevelt was raised an eastern aristocrat but seemed genuinely to like everybody, regardless of class or region. When he addressed people as “my friends,” whether among a small group, in a public speech, or over the radio waves in one of his periodic “fireside chats” (many of which were broadcast from Springwood), all kinds of people were drawn to the man with the welcoming manner and a passion for conversation and company. The American people not only accepted his friendship, but they admired his implacability and the seemingly bottomless optimism that had been in evidence since childhood. Everyone felt they knew this man, and most people liked him.

Although Springwood offers a superb vantage from which to consider Roosevelt and his many facets, the home never actually belonged to its most famous occupant. At his death in 1900, Franklin’s father, James, left it not to his son (then newly enrolled at Harvard) but to his widow, Sara; prior to her death in 1941, Franklin had asked his mother to deed the estate to the federal government. Yet Springwood remains unique among presidential sites, as the property at Hyde Park was Roosevelt’s principal home throughout his life; even as president he traveled there often, making almost two hundred trips to Springwood in the course of his thirteen-year presidency.
Advertisement

President Roosevelt spent languid summer days in the house that overlooked the Hudson; he ritually returned home at Christmas for his hearthside reading of A Christmas Carol to the children and grandchildren; he planned war strategies with Churchill there. After his death on April 12, 1945, his remains made one last pilgrimage to Hyde Park, traveling through the night past thousands of Americans who gathered to watch and grieve as the funeral train passed. He was bound for the resting place he had chosen, his mother’s rose garden at Springwood.