Closing Up the Box

Advice on what to do in order to ensure the house wrap properly covers all appropriate surfaces. 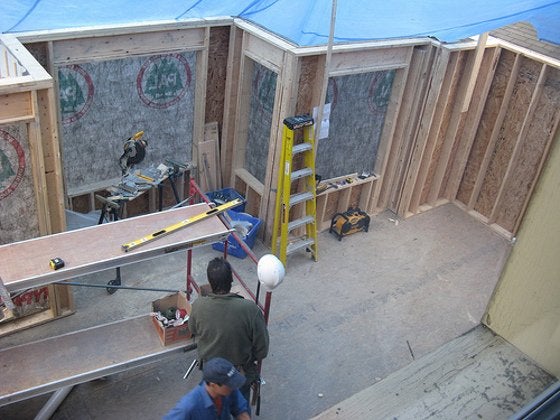 On the exterior of the walls, a layer of a water-repellant material will probably be applied, especially in cooler climates. Think of your addition as a gift package, and just like a tie or child’s toy, it needs to be appropriately wrapped. In the case of a building, however, the material won’t be colorful paper. It’ll be one of several products described as air-infiltration retarders.

In the past, papers impregnated with asphalt (tar paper) or rosin were applied to the exteriors of houses, after the sheathing went on but before the siding did. More recently, proprietary products like Typar and Tyvek have superceded such papers. The new house wraps are high-tech sheets of olefin fibers that are stapled in place. This clever extra skin allows moisture vapor to escape the wall cavity yet also stops wind from moving freely into the wall.

The house wrap should cover all wall surfaces. Flaps should fold in at win­dows and doors. An important step that is sometimes omitted is the application of a specially made seam tape over joints between sheets of the wrap and around win­dows and doors. Without it, the wrap will not form a complete air barrier.

WINDOWS AND DOORS
Windows and doors tend to be key unifying features in an addition. The chances are good that you and your designer will use doors and win­dows that match or at least resemble those in the existing house. However, in select­ing any new windows, there are a number of issues to consider. Among them are these:

Wood or clad windows. The windows in most older homes are made of wood (though metal casement windows have also had several bursts of popularity). On the other hand, many new windows have their exterior surfaces clad in aluminum or covered with vinyl. The advantages of the vinyl and aluminum is they do not require paint­ing; the disadvantage is they don’t look like wood and therefore may not match the existing windows.

Energy efficiency is another issue, and the basic rule of thumb is that the more layers of glass, the greater the insulation value of the windows. Your basic single pane window has an R-factor of about one; thermal glass (two panes) doubles the R-factor; if a Low-E coating [E is for emissivitrf is added (a coating that helps reflect heat back, quite like a mirror reflecting an image), you gain another R or so; the same is true if argon gas is sealed between the panes in the airspace, as that limits heat and cold transfer. A typical insulated two-by-four stud wall has an R-factor of about ten, so you can see how a window space can account for significant heat or cooling loss.

The window industry uses another unit of measurement, the U-value. The II- value actually measures the heat lost—it’s the inverse of an R-value. An R value of two equates to a U-value of one-half; U-values lower than that have higher insulat­ing value.

All of which is to say that, as usual, professional help and some shopping around is recommended when you make your decisions about which windows to use. The same is true with doors, too, though the options aren’t quite so bewildering. In general, I recommend attempting to match existing windows and doors unless you are building new spaces that are intended to contrast with the original house. And keep in mind, too, that in heating regions of the country, tight and well-insulated doors and windows almost always pay for themselves over a period of years in energy savings.

SIDING AND TRIM
As with the windows and doors, your guiding principle should be the existing finish on the house. But by this stage, you and your architect/ designer, along with your pocketbook, will long have decided what the materials will be. If your construction project is a remodeling or an addition to an existing house, then presumably you will have chosen the same or a compatible matertal to what is already there.

FIREPLACES AND CHIMNEYS
Should your project involve a new bnck fireplace or chimney, the masons will be at work during much of the framing. Depending upon the complexity of the masonry mass, it can take a few days or a few weeks for the stack to make its way, course by course, from the footing at ground level out through the roof.

13 Renovation Lessons You Don't Want to Learn the Hard Way

16 Improvements Most Homeowners Get Wrong

15 Things Never to Keep in Your Garage

20 Photos That Show Why Chicago Loves the Two-Flat