Understanding the geometry of your house can help you think about changing it. 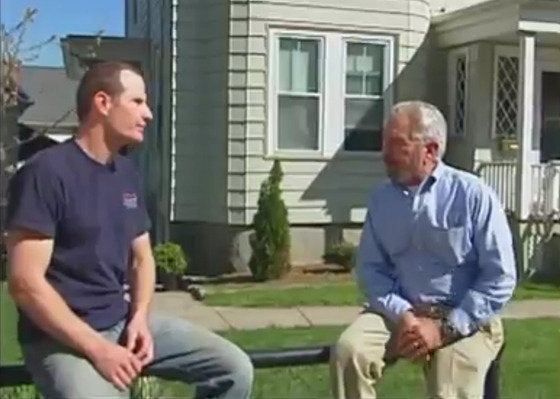 Bob and Homeowner Nick Beasley sit outside his Foursquare Home

Let’s consider a handful of architectural terms that are especially useful when talking about the forms of buildings.

Symmetry. The dictionary tells us that the word symmetry describes a “correspondence in size, form, and the arrangement of parts on opposite sides of a line or plane.” In practice, that means that if you draw a horizontal line and then a vertical one that intersects the first at its center point, you will have a symmetrical figure, with one side balancing the other. In the same way, if you begin with a rectangle and bisect it, it too is symmetrical. Let’s add some openings to a four-sided box—windows on either side of the central axis, perhaps a door at the center. All in a rush, a house begins to emerge. All we need to do is add a roof and a couple of chimneys, and we have a two-dimensional representation, an elevation they call it in drafting class, of a recognizable Georgian House (or the Classic Colonial, as this configuration can also be described). Needless to say, the place is symmetrical.

Asymmetry. Again, we start with a line, but this time we consciously divide it into two asymmetrical (uneven) parts. We make it a box, add a couple of openings, then put on a gable end (centered on our perpendicular). After adding a few details, we have a Gothic Revival Cottage.

Mass. This talk of symmetry may seem to imply that houses exist only in two dimensions, and that by looking at an elevation drawing of a structure, we can understand it. In fact, thinking how the facade of a house appears on a piece of paper is helpful, but other angles of approach are essential, too.

Instead of a piece of paper, think about a small waxed-cardboard milk or juice carton, the kind that holds a ½-pint of liquid. It’s a three-dimensional object, meaning it has width, height, and depth. It takes up space, just as people, books, and bricks do. And, for that matter, just like buildings.

A one-and-a-half-story house has a full ceiling on the first level and enough height on the upper floor that portions of it can be used as living space. Lower the pitch of the roof and you have a ranch house, a one-story home, in which living areas are found only on one level. The Cape Cod is a popular compromise, because living quarters on the upper floor are to be had for virtually no additional expense over the cost of a one-story house. To some, however, the built-in limitations on ventilation, light, and head room make it less of a bargain than at first it seems. For them, perhaps, the two-story house is the answer. In this configuration, the roof stands a story higher, atop a full second story. Thus, the same footprint can accommodate houses of radically different mass.

In order to have a ranch house with an equivalent amount of interior space to a two-story house, however, the ranch will need to have a footprint twice as large as the two-story house. That makes the ranch best suited to larger lots, while two-story homes are well adapted to in-town plots or small suburban settings.

Shape. So far, we’ve talked about houses in the shape of a box. Some are taller or wider or deeper than others, but they’re basic boxes with four sides and a top and a bottom. In the past, consolidating the living space around a chimney and within such a regular form made good sense. But changing needs, advances in heating technology, and evolving tastes led to what architectural historians often call “breaking the box.”

The devolution of the box took time. Early houses often had ells added off their rear elevations, resulting in T-shaped plans. As asymmetry became acceptable with the Greek and Gothic Revival Styles, wings appeared on the sides of new houses, resulting in L-shaped homes. In some instances two or more secondary structures were grafted on. Many houses had bay windows, towers, turrets, porches, or other elements that broke the planes of the box. When a number of different masses are combined (think about the way some great Victorian houses seem to ramble), the term massing is applied to describe the assemblage of the various three-dimensional elements.

For a moment, though, let’s return again to the box house. After all this talk about T-shapes and L-shapes and the rest, you may be surprised to find what a difference a simple change in roof design can make.

Certain roof shapes—the Mansard being the best example—telegraph the style of the house (a Mansard roof means the dwelling is a Second Empire House). Some roofs are tall in order to maximize the living areas beneath them (like the gambrel or the Mansard), while others are lower and enclose little more than storage space. Some are simple, others require complex carpentry full of compound angles. The roof of a house may seem like little more than necessary weather protection, but it also communicates much about the design of a house.

Visual Balance. Some buildings are symmetrical, others asymmetrical. But good houses, regardless of their symmetricality, usually share one thing: They are balanced.

Balance is a concept that designers grapple with to make buildings more satisfying, but one that you, too, can recognize as adding (or detracting) from the appeal of a house.

Overall Shape and Mass. The overall shape and mass of a house convey a great deal about the place.

Consider the contrast between two different houses that date from the same era. A Foursquare has a boxy, two-story mass with a tall roof; the Prairie Style home is low-slung, consisting of only one story with a flattened roof and broad overhangs. While the Foursquare and the Prairie Style House share similar origins, one is essentially vertical, the other horizontal. One seems to have been wiped across the landscape, the other to have grown out of it. One sits atop the landscape, hunched as if to confront the challenges of Mother Nature; the other rests more easily, going with the flow of the terrain. Yet they can contain the same amount of living space.

Remember that the shape of every house—whether it resembles a single milk carton or a dozen cartons that collided—tells a story of whence it came. Understanding the geometry of your house, even in such broad strokes as these, can help you think about changing it.

The Language of Design
Advertisement