A simple tool that offers so much value. 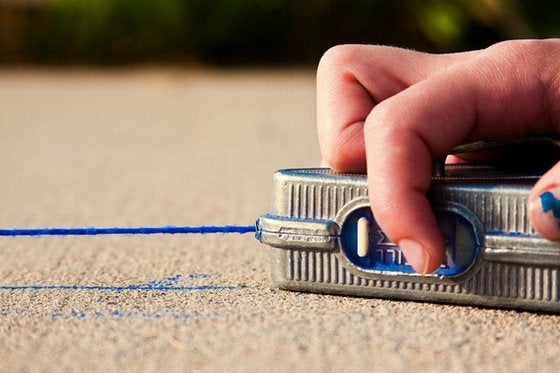 I’ve admired this deceptively simple tool since I first saw my father use it decades ago. It is used to mark straight lines on a surface and, like so many tools that seem positively elegant in their simplicity, the chalk box as we know it today has been around for many, many generations. It’s also known as a chalk line and snap line.

Its chief advantages, then and now, are that it can mark lines on rough surfaces (where pencils or other markers would be difficult to use) and it will make long, straight lines beyond the reach of any standard straightedge. Lines of more than twenty feet become less and less accurate as the distance increases.

The chalk box consists of a string with a hook on its end and a convenient case into which the line is reeled when not in use. Cotton string is generally preferred because its natural fibers retain the chalk well, don’t stretch, and leave a neat line. The metal or plastic case has a crank for retracting the line and contains a reservoir of powdered chalk (usually red, blue, white, or yellow in color) that can be purchased in plastic containers for refilling. When the line is pulled from the chalk box, chalk adheres to the fibers of the string; a gasket at the mouth of the chalk box insures the coating is consistent.

The chalk-covered line is then stretched between points on a plane, often using the hook at one end to hold the string in place. A small nail tacked in position also works well if you’re working alone and the clip seems unwilling to stay put.

The opposite end of the line is pulled tight, and the string pressed against the surface to be marked. The line between the points is then lifted off the surface slightly, and allowed to snap back. The result is a line – in chalk – connecting the points.

The chalk box itself is designed and weighted so that it can act as an oversize plumb bob, allowing it to be used to snap a plumbed line when needed.

Tilers and wallpaperers find chalk lines handy since centerlines or start-finish lines can easily be snapped to act as guides for the application of their materials to fixed surfaces.

The line itself varies in length; some models come with as few as twenty or so feet, others with lengths of one hundred feet. If you find you use the chalk box often and for different tasks, you may want to have two on hand, each filled with a different colored chalk. That can make distinguishing lines on a wall or grid easier.

10 Mistakes to Avoid While Using Disinfectant