More than a third of new homes are built with backyard decks, and they’re a really a popular do-it-yourself project. As they grow more popular we’re also seeing a rise in tragic injuries and deaths caused by deck collapses which could have been prevented with the right building techniques. 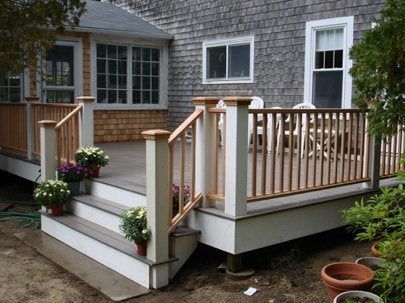 Listen to BOB VILA ON SAFE DECKS, or read text below:

A deck’s weakest point has been found to be its connection to the house:  in almost all collapsed decks, the main beam was attached to the house’s wooden sill with nails.  First and foremost, that connection should always be bolted.  The weight and movement of people on the deck isn’t just pushing down, it’s pulling the deck out as well, and after a season or two in the weather those nails will come right out under pressure.  Lag or straight bolts will not.

You also want to be sure that deck-to-house connection is well flashed to keep water out and prevent rot.  Even better, attach spacers before bolting them together to keep the air moving. (You can avoid the problem altogether by building a free-standing deck an inch from the house and cross-bracing the posts for stability.)

Bob Vila Radio is a newly launched daily radio spot carried on more than 60 stations around the country (and growing). You can get your daily dose here, by listening to—or reading—Bob’s 60-second home improvement radio tip of the day.

For more on decks, consider: