A streamlined, modern fire pit makes your outdoor living area look like a million bucks, and it costs only $25 to make. 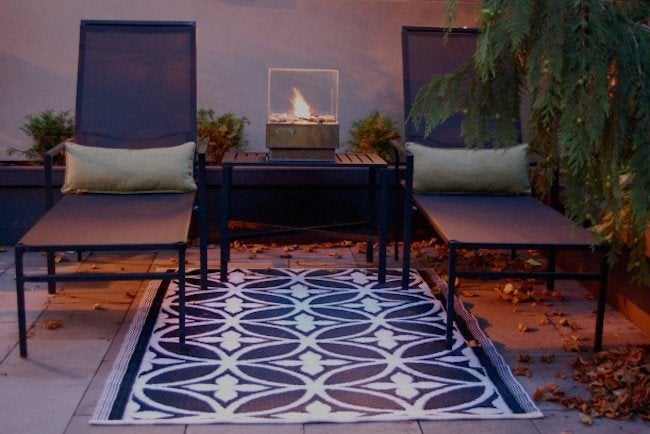 Karen loves fires—summer bonfires, barbecues, and winter evenings spent ’round the living room hearth. Even so, she’d hesitated to add a fire pit to her backyard patio. But when she saw a portable fire pit her sister had made, Karen realized that during the so-called “shoulder” months—March, for example, or September—a small, portable fire feature would not be an eye-catching decorative addition to her outdoor living space, but would also afford a few extra weeks of patio season.

On her blog, The Art of Doing Stuff, Karen provides a step-by-step tutorial for building a DIY portable fire pit that looks about $300 more expensive than it actually costs to assemble—$25. The patinated metal base of the fire pit actually started out as planter. Karen got hers on sale at a garden center. Meanwhile, the glass components are repurposed from a quartet of cheap picture frames that were lying around her house, as if it waiting patiently for a second chance in life.

With clear marine silicone (available at hardware stores and home centers), Karen adhered the glass panels both to each other and to the planter base. Then, having measured the space within the chamber, she cut a piece of metal mesh that would fit perfectly inside. Before placing in the mesh, though, Karen added her secret ingredient, gel fuel. Sold in small, low-cost canisters, gel fuel burns cleanly, and though it produces no smoke, its flames look convincingly like those of a genuine wood fire. The mesh layer separates the pebbles from the gel, while concealing the canister even from those standing right next to the fire pit. To ignite the gel, simply inch the pebbles aside and administer a flame by means of a long kitchen match—or take a cue from Karen, who likes to use a spaghetti strand!

If you enjoy splitting wood, hauling logs, and disposing of ashes—tasks often entailed by a traditional fire pit—this isn’t the DIY for you. But if you love the minimal maintenance requirements of Karen’s version, her ingenious tabletop version, clean-lined and modern, may be the perfect addition to your deck, porch, or patio.

FOR MORE: The Art of Doing Stuff

21 Home Hacks That Are Just Crazy Enough to Work
Advertisement