After decades of working as contractors, two brothers set out to design a long-lasting hammer. And they succeeded. 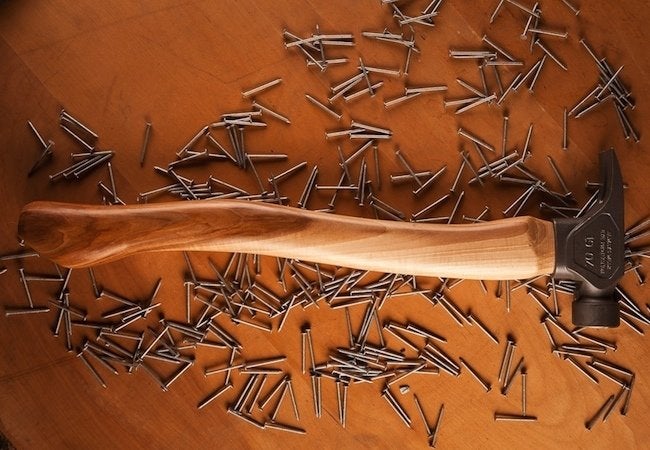 After a combined thirty years in the construction business, brothers Steve and Rick Spencer had grown tired of relying on tools they viewed as merely mediocre. Together, they set out to design a more perfect hammer—powerful enough for framing yet specialized enough for finish work. Within a year, they had completed a prototype and begun Hardcore Hammers. Though axes and hatchets have joined the product offerings, the company’s signature hammer remains the top seller.

Made in America—entirely in America—the hammer boasts fine craftsmanship and a loving attention to detail. For instance, the hickory handle thickens at the bottom, at the point where you would grip it, but slims down at the middle so as to make the tool as light as possible. Where it really excels, however, is in the unique design of its durable, versatile striking surface.

The Spencer brothers knew that long before the rest of a typical framing hammer wears out, its waffled face loses the traction so important in driving nails. Though that problem had always existed, it actually became more pronounced when the tool industry switched from steel to titanium. While newer titanium framing hammers cost more to purchase, their grooved faces would smooth out even faster than before, thus leaving fairly young tools with useless heads.

For many pros, another frustration with typical framing hammers is how they’re unsuited to finish work; their waffled striking surfaces leave obvious and unsightly marks on workpieces. In the past, you’d have to switch to another hammer, one with a smooth face, just to tap in a few last nails. But with Hardcore Hammers, you can keep on working, with no interruption.

Here’s the breakthrough: Hardcore Hammers have slightly recessed striking faces, with a smooth outer ring around a waffled inner face. That means you can use the same hammer for rough carpentry and finish work. No other hammer on the market gives you the same freedom.

Meanwhile, Hardcore Hammers go a long way toward ensuring that the waffle, once the first to wear down, now outlasts the other tool components. While the outer rim protects the waffled face from striking anything but the nail, the waffle itself has been specially manufactured to last a long, long time. It’s milled, not in the conventional way, but with hardened steel. So only after years of sustained use would the tightly waffled pattern even begin to flatten out.

With a sticker price of $79, it’s not an inexpensive tool. But then again, that’s the whole point: You’re making an investment here, knowing the tool is going to serve you for years to come.