How To: Choose an LED Bulb

These days, you'll find a dizzying array of new options in the light bulb aisle. The next time you're out hunting for a replacement, let this tutorial help guide your selection. 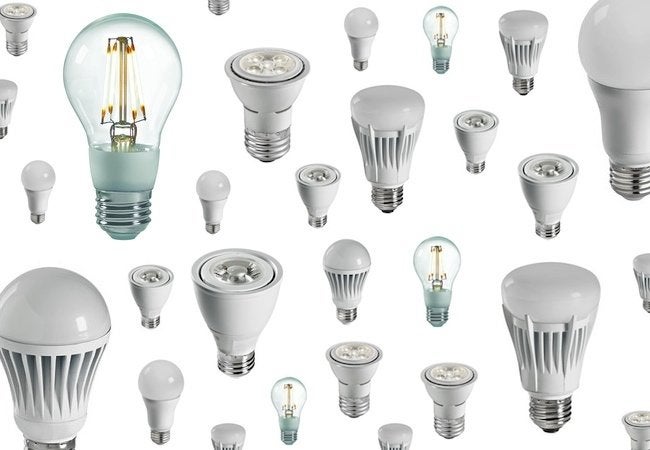 If you’ve gone out to buy a light bulb recently, chances are you’ve hesitated over the unfamiliar selection. Traditional incandescent light bulbs have gone by the wayside, having been replaced by a slew of newer—and seemingly quite pricey—energy-efficient options. Clearly, something has changed. So what’s going on? In 2007, the federal government passed the Energy Independence and Security Act (EISA), mandating higher energy standards. One target of these new regulations was lighting efficiency. While the typical consumer probably never noticed, the standard incandescent bulb is a real energy-waster; in fact, it wastes about 90 percent of the energy it uses. Efficient bulbs can produce the same amount of light with much less energy.

Among the field of new energy-efficient light bulbs, LEDs are swiftly emerging as a homeowner favorite. In part, that’s because they produce the most pleasing light. But you’ve got to be impressed by their stats too: LEDs operate five times more efficiently than yesterday’s incandescent. Daniel O’Brian, a technical expert from online retailer SupplyHouse.com, adds, “Another large advantage is projected lifespan. While incandescent bulbs last about 1,200 hours, you can expect an LED bulb to last up to 50,000 hours. That would be equal to having to replace 42 incandescent bulbs over the lifetime of a single LED.” That’s impressive.

Though LED light bulbs cost more to purchase (about $10 per, as of this writing), they and their efficient cousins are poised to save the average household about $50 annually, according to the U.S. Department of Energy. With such savings at stake, it’s no wonder everyone’s scrambling to understand the new products on offer in the light bulb aisle. If your head’s still spinning, consult the guidelines below for help in choosing an LED bulb that’s just right for your home.

Watts vs. Lumens
Only a couple of years ago, we’d compare wattages in order to distinguish between the brightness of different light bulbs. Nowadays, what matters is the bulbs’ output in lumens. O’Brian explains, “Wattage really refers to power consumption.” Lumens, on the other hand, “actually measure the brightness of a light.” This isn’t change for the sake of change alone. The fact is that newer bulbs are so efficient that they render the old packaging system meaningless. O’Brian says that “while a 40-watt incandescent can give off around 450 lumens, a 7-watt LED can provide the same brightness.” It may be a bit confusing and inconvenient, but clearly, in today’s shifting landscape, lumens are the only measurement that counts.

To assist consumers in their watts-to-lumens transition, the American Lighting Association has issued guidelines for consumers seeking efficient equivalents to the incandescents they’re accustomed to buying:

Color Temperature
Anybody who’s worked in a fluorescent-lit office knows too well that brightness isn’t the only key factor. Equally important is color temperature—that is, how warm or cool the light appears. Color temperature is measured in Kelvin (K); the higher the number, the cooler the light. For example, “soft white” bulbs are rated up to 2700K, on the low side of the scale, producing a warm, relaxing glow. “Daylight” bulbs, rated from 5000K to 6500K, produce a crisp light suitable for laundry rooms, garages, and security purposes.

Shapes and Sizes
LED bulbs come in many different shapes, each of which has its own intended use. The most familiar bulb shape is known as “A-line”; these are what you’d use for, say, a table lamp. “Candle”-shape bulbs are designed for chandeliers and wall sconces, while “globe” bulbs are ideal for pendant lamps or any other application in which there isn’t a shade. Other popular shapes include floodlights, spotlights, and down lights.

Your Bottom Line
It’s certainly true that LED bulbs cost more than incandescents. The financial benefit of the efficient light bulbs comes over the long term, because LEDs cost about 75 percent less to operate and seldom need replacement. Think of it this way: Whereas running a 60-watt incandescent bulb costs about $4.80 per year, running an equivalent LED costs only a dollar.

How To: Make an LED Marquee Letter
Advertisement

16 Brilliant Lighting Ideas You Can DIY on a Dime

The 9 Best Lighting Picks for Your Bedroom

10 Doable Designs for a DIY Rug

Hanging by a Thread: 9 Inventive Ways to Hang Pendant Lights