What are the architectural hallmarks of these stunning Victorian-era homes, and what kinds of renovations might you be in store for if you buy one? 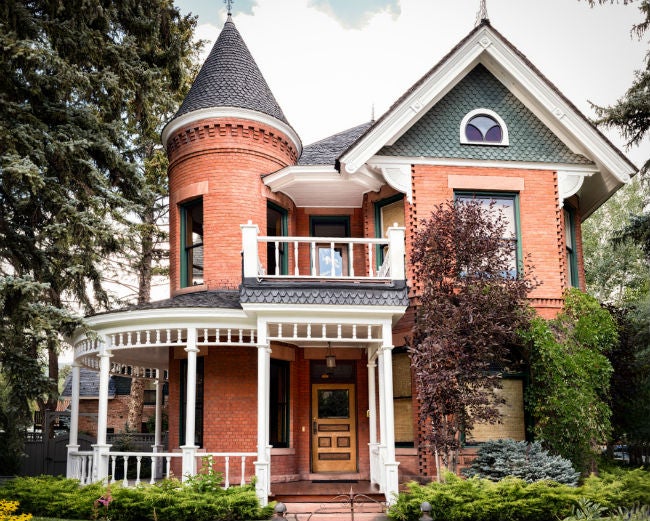 A number of architectural styles are associated with the reign of the British monarchy, but few compare to the impressive nature of the Queen Anne style that swept through America at the turn of the 19th Century. With their fanciful fairytale design and decorative detailing, these homes, most of which were constructed between 1880 to 1910, have an undeniably regal air.

In communities across the nation, stunning examples of the Queen Anne architectural movement can still be found, and they’re just as stately and desirable today as when they were built.

Has it always been your dream to own a Queen Anne house (and take on the often necessary restoration)? Whether you’re a potential buyer or you simply wish to learn more about this romantic architectural design, there’s a lot to learn about these century-old beauties. Ahead, learn how this architectural style came to be, and why you should think carefully before committing to purchase one of these majestic homes.

Anne Stuart, Queen of Great Britain from 1702 to 1714, reigned during a time of European growth and expansion when aristocrats and wealthy landowners built impressive homes. Except for the large footprint, however, houses associated with the British Queen Anne period were rather plain, having little in common with the ornate style of the American Queen Anne house that developed later. The most distinct feature of the British style was bilateral symmetry—meaning if you divided the house down the middle, both halves would be mirror images of one another.

With its masonry façade and towering symmetrical design, one of the best remaining examples of the British style is Winslow Hall, located in Buckinghamshire, England. Additional hallmarks of British Queen Anne architecture include:

2. San Francisco’s “Painted Ladies” might be the most famous Queen Anne houses in America, but you can find homes of this style all over the U.S.

While experts say that the Queen Anne home design movement began in Newport, Rhode Island, with architect Henry Hobson Richardson’s half-timbered William Watts Sherman House, the group of seven homes in San Francisco called the Painted Ladies are the most famous examples in the United States. Built between 1892 and 1896, these seven asymmetrical Queen Anne homes have front-facing gables, bay windows, and front porches.

However, it’s their intricate decorative spindlework and vibrant colors that got them featured in the 1978 book called Painted Ladies: San Francisco’s Resplendent Victorians, which led to their nickname and made them famous, too. The row of homes is a popular tourist location for Instagrammers to add images to their feeds.

Even though San Francisco may boast the most well-known example of Queen Anne architecture, other cities have similar collections of this housing style. Some of these include Baltimore’s Charles Village, New Jersey’s Cape May, and Old West End in Toledo.

3. The opulent American Queen Anne style is probably what you think of when you imagine a Queen Anne house.

The Queen Anne architectural style changed significantly when it was introduced to the United States at the 1876 Central Exhibition in Philadelphia. American architects, including H.H. Richardson, a prominent New England architect, sought to combine elaborate elements from the Jacobean era (associated with the reign of King James VI of Scotland in the 16th Century), with the castle-looking towers and turrets of the Elizabethan era (named for Queen Elizabeth I of England during the same period). The impressive combination became known as “Revival Queen Anne.” Gone was the bilateral symmetry and severity that defined the British original, and the opulent new style began trending across the nation.

RELATED: 14 Mansions You Can Rent Right Now—for Less Than You Think!

One of the best-known examples of American Queen Anne houses is the Carson Mansion, located in Eureka, Calif. Revival Queen Anne houses (known as just Queen Anne today), are often called Victorians because they were in vogue during the reign of Britain’s Queen Victoria. However, “Victorian” and “Queen Anne” are terms that should not be used interchangeably—Queen Anne is just one of the Victorian styles. Hallmarks of the style include:

While large Queen Anne mansions were reserved for the wealthy, popular elements of the style began to appear in smaller homes, known today as Queen Anne cottages. These scaled-down versions were often one or two stories that incorporated a few outstanding elements, such as a single turret, a wraparound porch, and gingerbread trim. Their interior floor plans were similar to other middle-class homes of the time and varied widely in design. Only the exterior design elements earned them the label of being Queen Anne Cottages.

The city of San Francisco boasts a collection of seven Queen Anne cottages along Harrison Street in the central Mission District. All of these little gems were built by a carpenter named Alfred Olsen. More charming examples of this residential style are in Bennington, Vt., and South Claremont Avenue in Chicago’s Tri-Taylor neighborhood.

RELATED: 10 Signs That Fixer-Upper Might Be a Money Pit

Many surviving American Queen Anne houses have been beautifully restored and can be found on tree-lined streets in postcard-perfect historical districts. Visiting them can take your breath away, and inspire you to own one or even take on the task of restoring one. If renovating a Queen Anne is your dream, be aware of the few downsides.

Depending on how the previous owners cared for the home, fixing up a Queen Anne home can be a big undertaking. Often, electrical wiring must be updated and new plumbing installed. Plus, many opt to replace old windows with new energy-efficient models and update kitchens and baths, too.

Some Queen Anne homes are designated historic, which also adds to the costs and the obstacles of renovating. There may be limits on the exterior paint choices, higher insurance costs, and costs for special permits. In addition, using traditional building methods and detailed craftsmanship can be expensive and take a great deal more time. Here are a few possible challenges:

If you are curious about building a Queen Anne home from the ground up, costs typically average $350,000 and can exceed $1 million, depending on the complexity of the details and size, according to HomeAdvisor.

Color is one of the most important aspects of a Queen Anne home. While the detailed architectural elements are charming on their own, they become a stunning collection when painted with the exuberant contrast of colors.

In their heyday at the turn of the 19th Century, Queen Anne houses were often painted in three or more colors, including combinations of reds, browns, yellows, blues, greens, and oranges. In fact, it’s not uncommon for the colors on a Queen Anne facade to be on opposite sides of the color wheel. Today, Queen Anne homeowners who need color inspiration need only look to paint brands with curated, historically accurate paint collections: Dunn-Edwards, for example, offers a collection of Victorian Era paint that makes it a cinch to select complementary Queen Anne home hues for the exterior. Sherwin-Williams has a collection of historic late Victorian paint colors that are ideal for a Queen Anne interior.

Find inspiration from other homes from LovelyOldHomes on Instagram, which showcases Victorian homes including those in the Queen Anne style. Archi-ologie and Housezoom, also on instagram, features colorfully painted old homes.

4 Things to Know About the Iconic American Foursquare