Restored to Life: The 12-Year Kitchen 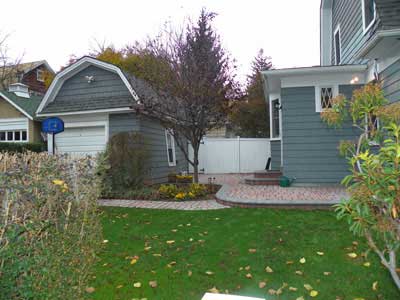 Three weeks after the landscaper worked his magic, we have a nice thick lawn and colorful plantings to finish off our remodeling project.

A landscaper once lamented to me that homeowners rarely budget enough for their exteriors when they plan a remodeling project. “They spend all their money on the inside work,” he said, “then they have nothing left when it’s time for sprucing up the outside.”

The grass and plantings around our little 40×100 lot hardly even justify the word “landscaping,” but what was there had been soundly trashed by the excavation and demolition that started our project, followed by months of deliveries that compacted what was left of that section of the lawn. The fine layer of cement left behind by the patio crew sealed the whole area into a rock-hard moonscape.

The landscaping crew managed to turn rock-hard clay into a plantable lawn -- and they did it all by hand.

A few of the bearded irises and black-eyed Susans we’d planted along that length of our picket fence had survived, but most of them had disappeared—probably several feet under the clay. Between the lost flowers and the barren lawn, our exterior was in pretty dismal shape.

And then there was the tree. Five years ago we planted a small ornamental plum tree between the house and the garage to provide a little shade and privacy for our eating area.  It wasn’t exactly in the path of the new construction, but it came perilously close. The contractor had recommended removing it or relocating it before we did the work, but that proved impractical—we’d gotten an estimate of $600 from an arborist who would try to move it, but he couldn’t guarantee it would survive. For $600, of course, we could have just gotten a new tree, with a guarantee, so it didn’t make any sense to spend the money and risk losing the tree.

Our ornamental plum tree is the pefect size and color for the space—here are the new plantings lined up and ready to go in the ground.

But we didn’t want a new tree, we wanted our tree—the tree we planted the year we adopted our second daughter, the year one of our best friends had lost her battle with cancer, the year Margaret’s beloved grandmother had died at 99. Watching the tree grow and thrive over the last five years had genuinely meant something to us, and we didn’t want to lose it. We even designed the patio around it! We were keeping that tree.

Though our little tree had lost a few limbs over the course of the project, it was still healthy and strong. We knew we needed to do something about the soil around it, which was in the compacted area of the yard. We also wanted some color around its base and some plantings to soften the edge of the patio that ran alongside the garage wall.

We talked about making the yard work a DIY project to save money (as my landscaper friend had predicted), but after consulting our local garden center, I reconsidered. When I described the condition of the yard, the manager said I’d have to roto-till the area, mix in a hefty load of peat moss and top soil, level it all, then seed it. I knew I didn’t have the time to do it, but I also doubted I had the strength and stamina to do it myself. (I thought about that year I rented an aerator and ended up wrestling it all over the yard—knowing your own limits is a legitimate reason to farm out work!)

Keith recommended a landscaper to do a quick lawn makeover for us—and it was money well spent (not too much of it, either, considering). The back-breaking work that would have taken me several weekends to do was a few hours’ task for a four-man crew. The yard was hoed, leveled, peat-mossed, aerated, seeded, and fertilized, with new plantings added along the fence and under the tree, all in a single morning. I thought we were done in when we had that early snowstorm just a few days after the seed went in, but two weeks later we had green fuzz emerge, and a week after that we had lovely new grass.

After chopping it, fertilizing it, leveling it, and seeding it, the landscape crew took one last look at the yard—it took almost three weeks for the grass to come in, but it was worth the wait.

The exterior of our house now looks as lovely as the new kitchen looks inside—I’ll have to give that old landscaper friend of mine a call and let him know he was right. Saving a little of the budget to add that finishing touch was really a smart choice.

Next: The Proof of the Pudding

For more on landscape and gardening, check out the following Bob Vila articles and videos:

Landscaping with Hedges, Trees, and Perennials

7 Kitchen Layout Ideas to Consider Before You Renovate

A Year of Planning: The 12-Year Kitchen
Advertisement

Getting Started: The 12-Year Kitchen