Capturing Your DIY in TimeLapse 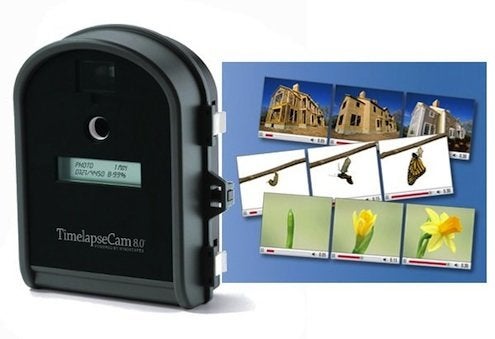 It’s a ritual that dates back to cave times—DIYers showing off their proud achievements.

‘Before and after’ shots are OK, but if you really want to chronicle start-to-finish project progress, you need timelapse photography. For an elegant, soup-to-nuts approach to that kind of recording, consider the TimelapseCam 8.0 from Wingscapes.

Half the size of a loaf of bread, the $110 TimelapseCam is almost as easy to use as an average digital camera. In fact, the two share many features and functions in common, though the TimelapseCam boasts the added benefit of being rainproof and is far sturdier than a conventional point-and-shoot.

You can attach the TimelapseCam to a tripod, strap it to a tree, or mount it to an upright. Once situated, the device will take photos (or ten-second videos) at 11 different intervals ranging from 10 seconds to 24 hours.

The TimelapseCam comes with a measuring tape for gauging the distance to a photo subject. You set the lens to the distance using a knobby dial. Everything beyond eight feet is “infinity” to the lens, which suggests that it should be pretty good at capturing closer scenes. There’s a viewfinder, but you do have to manually focus the camera.

Surprisingly, there are only six controls (seven, if you count the power button) used to set shooting schedules, date and time, photo or video, image quality and everything else. A 16-character, two-line display recalls certain nightmares from the early days of computing, but hey, it works.

A victim of excess access to computers, I was a little intimidated to open the camera and take test shots. I need a keyboard the way children need the calming presence of a pacifier. Even still, I was able to go from setup to having five finely detailed photos on my laptop within 15 minutes.

If only neanderthals Koorek and Zom had had a TimelapseCam, we’d know what their cave looked like as they painted it. Surely, an opportunity missed.

For more on the TimelapseCam 8.0, visit WingScapes. For related content, consider:

Blog Stars: In the Workshop
How To: Refinish a Wood Table
Bob Vila Nation: Before & Afters