Through policies, plans, and progress, states are gaining ground in energy efficiency. See where the Top 10 excel. 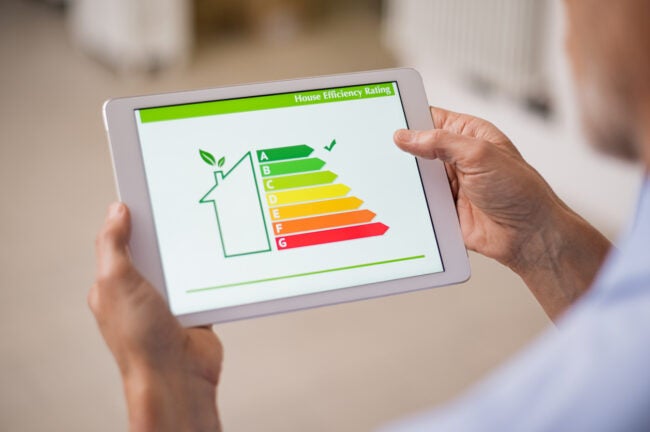 Increasing energy efficiency statewide can reduce emissions, including greenhouse gas and other pollutants. Energy efficiency has economic impacts, as well – individually by lowering utility bills and universally by stabilizing energy prices and creating jobs. Targeted programs can also decrease water use, a critical move during the recent multi-state water shortage.

Defining a state as energy efficient involves assessing many criteria, from green building programs to renewable energy production to energy incentives for homeowners. It’s a complex algorithm because not every state excels in every aspect of energy efficiency.

We examined WalletHub’s survey of the most energy-efficient of the 48 contiguous states, based on auto and home energy consumption, to find out what made the top 10 and why.

RELATED: 15 Easy Ways to Reduce Your Carbon Footprint at Home

Known as the Beehive State, landlocked Utah ranks high in providing incentives for homeowners, businesses, and builders to be energy-wise. Incentives for energy-efficient appliances, insulation, air sealing, and upgrades for lighting are joined by tax credits for installing solar systems. The state has the lowest energy consumption for homes and vehicles, with rebates offered for installing electric vehicle charging stations.

It ranks ninth in green building, according to the U.S. Green Building Council, and 12th in solar energy installations. As one of the driest states in the country, Utah launched a strong water conservation program that includes rebates for removal of green lawns to reduce watering. The state plans to have 20% of the energy sold come from renewable sources by 2025.

On its way toward its net-zero carbon goals, the Empire State has the lowest rate of carbon dioxide emissions per capita and has the fourth highest number of policies and incentives geared toward renewable energy, such as the state solar equipment tax credit. WalletHub deems it the second-most environmentally friendly state, with the third-lowest energy consumption per capita.

New York’s success may stem from its receipt of assistance from the U.S. Department of Agriculture, which provided $264.1 million in federal funding for renewable energy and energy efficiency projects between 2004 and 2001, the 14th largest sum handed out to a state during that period.

RELATED: 9 Energy-Saving Home Upgrades That Pay for Themselves

Having closed its last coal-fired plant in 2017, the Bay State has seen an increase in solar energy production. Massachusetts will require 35% of electricity sales to come from renewable sources by 2030.

The state has the eighth-largest number of renewable energy policies and incentives and reduced greenhouse gas emissions 22% below the 1990 baseline in 2018, with the fourth-fewest carbon dioxide emissions per capita. The U.S. Green Building Council ranked the commonwealth No. 3 for green buildings, with the most LEED-certified buildings per capita. In a report on the greenest states, WalletHub ranked Massachusetts the sixth-most environmentally friendly state.

RELATED: The Best Solar Companies of 2022

Ranked No. 4 for green buildings by the U.S. Green Building Council, the Centennial State has the most LEED-certified buildings per capita. The state is also ranked for its grid modernization efforts that began back in the 1990s with early adoption of smart meters to eliminate vehicle emissions by meter readers.

The Green Mountain State has the fifth highest renewable energy consumption, with most of its electricity coming from hydroelectric or other renewable sources, ranking No. 2 in renewable energy.

Vermont ranks 20th for its number of policies and incentives focused on renewable energy, offering several tax exemptions for solar, as well as a community solar program that allows people who don’t have solar panels on their home to purchase solar energy from a farm.

However, it’s the most environmentally friendly, says WalletHub. With 75% of its land forested, Vermont has not only restored forestland, but is also committed to protecting the land and wildlife through a state trust.

Given its long history of energy and environmental awareness, it’s no surprise that per-capita energy consumption in the Golden State is low; in fact, it is the second-lowest in the nation. California is also second in the nation for generating electricity from renewable sources and leads the nation in geothermal, solar, and biomass energy production.

In addition to adopting net-zero energy building codes, California leads the country with the most LEED-certified buildings. It’s a trendsetter for vehicle electrification and emissions standards, contributing to its ranking as the fifth-most environmentally friendly state, per WalletHub.

Coming in ninth overall in terms of energy efficiency, the Constitution State is ranked by WalletHub as the eighth-most environmentally friendly state. Offering numerous rebate and tax exemption programs, as well as a low-interest loan for purchasing solar systems, Connecticut ranks fifth for the most solar power produced per square mile. It has the fifth-lowest energy consumption per capita.

Connecticut is sixth on the U.S. Clean Tech Leadership Index, a ranking produced by Clean Edge that tracks clean-tech activities. The ranking is a nod to Connecticut’s large fuel-cell capacity.

On its way to a goal of zero carbon emissions by 2040, the state adopted California’s zero-emissions vehicle standards.

RELATED: These Surprising Stats Reveal How Much Pollution Americans Create

Maine ranks fifth for renewable and nuclear power generation and sixth for electricity generation from wind. The American Council for an Energy-Efficient Economy ranks it as 14 on a list of states with energy efficient policies and programs. The state funds rebates for qualifying energy efficiency improvements like insulation and air sealing. It also offers low-interest home energy loans for energy efficiency upgrades, including appliances.

The Best Energy-Efficient Light Bulbs of 2022