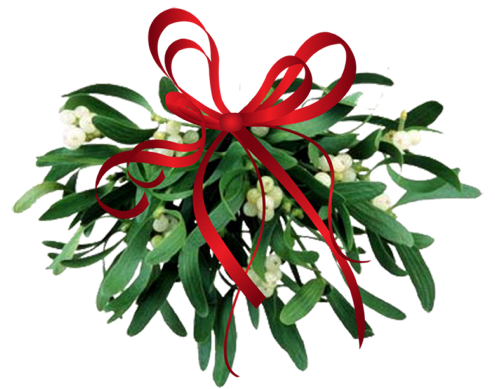 After decking the halls and decorating the tree, there’s only one thing left to do—hang mistletoe.

By doing so, you are participating in a ritual that holds more than just romantic significance. In fact, mistletoe was once arranged in homes to welcome the New Year and ward off evil. And it was also hung on a baby’s cradle to protect it from fairies.

In the Middle Ages, mistletoe was actually banned from inclusion in Christmas ceremonies on account of its association with pagan ceremonies. Since then, it’s also been revered for its medicinal properties, including a reputation for curing epilepsy.

Botanically speaking, the plant isn’t so charming. As a parasite, it grows on the branches of deciduous trees with soft bark, sending out a thread-like root from its sticky berries. Existing on the host tree’s nutrients, parasitic mistletoe will occasionally starve a tree to its death.

Unfortunately, thanks to a dry summer in the Southwest, the evergreen branch isn’t very easy to find. One of the main suppliers in the US—Tiemann’s Mistletoe in Priddy, TX—didn’t ship last season due to Mother Nature, and they weren’t able to resume this year (fingers crossed for 2013).

Luckily, there’s at least one state producing mistletoe: Lacey Stitt, of mistletoe.com, says the State of Oregon has no shortage of the holiday standard. The company ships across the US, usually within five days of ordering.

Lacey suggests taking the mistletoe out of its bag as soon as it arrives and hanging the plant immediately. If you wait to hang it, keep the mistletoe cool in the interim. Eventually, the plant’s leaves and berries will drop, but they should last through the season.

For more on holiday decorating, consider:

The Best Christmas Ornaments of 2022