Also known as the table saw, the tilting arbor saw is the single most important workshop tool for many. 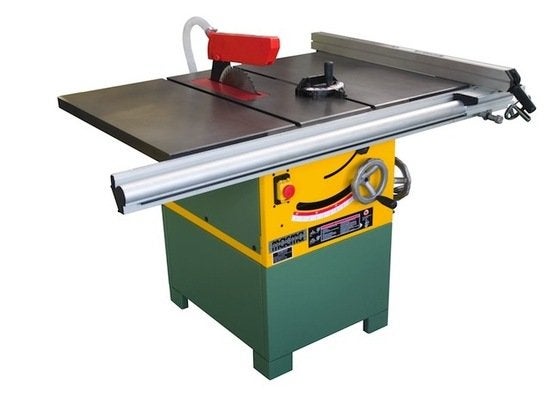 For many woodworkers, the single most important workshop tool is the table saw. Though it is most often referred to by that name (and occasionally as a bench saw or contractor’s saw), the more precise name is the tilting arbor saw. It’s a large but deceptively simple tool, really just an upside-down electric handsaw, mounted to the underside of a steel tabletop. Its circular sawblade peers through a slot in the table. The arrangement makes for a tool that cuts quickly and accurately and, with easy blade changes, is quite versatile.

The saw gets its name from the shaft on which the blade spins (the arbor). That axle can be tilted with respect to the horizontal tabletop (for cutting at angles) and raised or lowered to adjust the blade’s cutting depth.

(For word mavens who like technical terms, the tilting arbor saw is distinguished from the motor-on-arbor saws, like the hand-held circular saw and some bench top table saws in which the arbor and the armature of the motor are one and the same. The tilting arbor saw, with its pulley and belt drive, usually allows more of the sawblade to be used. And, in general, it’s much quieter than the direct-drive motor-on-arbor saw.)

The saw will make crosscuts (across the grain). Thanks to a pushing device called a miter gauge, it can cut stock at angles perpendicular to the tabletop; with the arbor tilted, the table saw can also cut compound angles. Using a rip fence, wood can be ripped (that is, cut with the grain) and rebated. It will re-saw, too (often a two-step ripping operation in which thick stock is sawn to a thinner dimension by sending it through the saw once on one edge, then flipping it over and ripping the other edge. Table saws will also take dado and molding heads for making rabbets, grooves, and shaped moldings.

Most table saws are freestanding, though benchtop models are economical, both in terms of initial investment and space required for use. Otherwise, the two key variables that distinguish one table saw from another are blade size and table size.

Blade Size. Ten inches in diameter is probably the most common table saw size, though smaller and larger diameters are also available. A ten-inch blade will cut stock up to about three and a quarter inches deep, while a twelve-inch blade will saw through stock that is more than four inches thick.

Table Size. For miscellaneous cutting and ripping, the size of the table- top is less important than the presence of additional props (wings or roller tables) to support the stock as it approaches and passes beyond the blade. However, if cutting sheets of plywood or other large panels is in your future, be sure that the rip fence can be set at widths of up to two feet. The surface area in front of and beyond the blade will help stabilize the workpieces, both for safety and accuracy. Less than ten inches of support in front of the blade is insufficient for other than simple cutoff work.

How To: Use a Table Saw

The Best Circular Saw Blades of 2022