The right setup means time spent on work, not waiting. 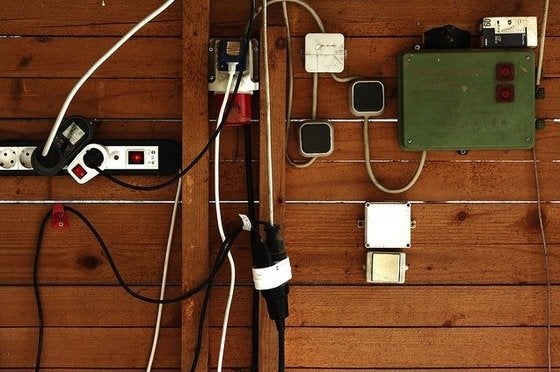 Structured wiring is fast becoming the backbone of home offices. It is a data delivery system that can carry phone, fax, broadband, networking, and video/television technologies. For example, phone and fax communications are predominantly analog, but voice over Internet protocol (VoIP), a technology that allows you to make phone calls using a broadband Internet connection, is gaining momentum. With a structured-wiring system, your home will be VoIP-ready when it comes to you.

Structured-Wiring Systems
The structured-wiring system is made up of three parts: a panel or module where all outside service enters the home; wires and cables throughout the house; and connecting hardware. Structured-wiring systems can come prepackaged, but a bundle approach without a plan can leave you with wasted outlets or no outlet where you need one. Develop a home-office power plan before you wire. It should detail where the computers, printers, phones, and media are set up and where conference calls and media viewing will happen.

A system is only as fast as its slowest component. The data capacity of copper wire is designated by the category, or Cat, of the wire and determined by its construction and how the wires are twisted. The main difference between the wiring designations is the frequency the wire is capable of transmitting. Frequency is rated in megahertz (MHz), also known as bandwidth. Cat3, for instance, is rated up to 16 MHz while Cat5 is rated at 100 MHz.

If you are considering structured wiring, it’s probably best to consider EIA-TIA 570-B. The residential telecommunications cabling standard was developed in 2004 as a voluntary guideline by the Electronic Industries Association (EIA) and the Telecommunications Industry Association (TIA). “The 570-B is a set of specifications and best practices that detail the technologies to install and the proper methods for the installation,” says Ian Hendler, director of business development for Leviton Manufacturing company in Melville, NY.

The 570-B recommends a minimum of Cat5e (enhanced) for communications. Coaxial cable, used primarily by the cable television industry and widely used for computer networks, as well as RG6, a coaxial cable system recommended by satellite TV system manufacturers, are still part of the specs. Cat 6, a sixth generation of twisted copper wire pairs designed to support communications at more than twice the speed of Cat5e, is recommended. Fiber-optic cable is also becoming more readily available, but compare the benefits and costs of upgrading to fiber optic before making your decision.

Modules or control panels for the system vary slightly in functionality. All reputable manufacturers’ products should conform to the 570-B standard. Look for ease of installation, upgradability and support from the manufacturer when making your selection.

Star Layout
Whether you have new construction or are remodeling, the system is installed the same way. The preferred method is the “star” layout. In this layout, each outlet extends individually to the service panel or module. The advantages are that this allows flexibility, helps to isolate any problem and provides less interference. Pre-wiring all possible locations when walls are open will obviously save time and money.

Structured wiring does not require a certified installer. However, when your home office work is at stake, you want to make sure a system is installed correctly and has the capabilities you want, as well as the flexibility to accommodate expansion. There are specific things to know about installing this wiring, from how far back the cable sheathing can be stripped to how much the pairs can be untwisted when they are connected.

The cost to install a system will vary. According to Leviton’s Hendler, “The capabilities of the desired system and the installation environment [new or retrofit] will affect the price. As an example, in new construction, a complete structured wiring system can range from about 1 percent to 3 percent (or more, of course) of a home’s value depending on the features, benefits, and applications the end user desires.”

There are options for those who have an older home and won’t be opening up walls. Wires can be fished through walls, although that will add to the cost and time. Those who don’t have aesthetic concerns can surface-mount the system and possibly accommodate it in moldings.

For those not in areas where high-speed Internet is available, there is still power planning to do. Be sure you have enough phone jacks and power outlets, even if it means tacking on surface-mounted lines. It’s less dangerous than having a mish-mash of extension cords.

Don’t Forget to Label
The best-laid plans fail if they aren’t organized. When installing structured wiring, be sure to label the various hubs, routers, patch cords, wires, and sockets. Well-marked components will help you find, isolate, and repair any network bugs. Another good idea is to make a master blueprint of the system when the system is installed and the specifications are fresh in your mind.

10 Legendary Homes That Were Never Finished