French doors add beauty and light to your home, but they can be a threat to your home’s security if they aren’t secured properly. Here’s how to make them safer. 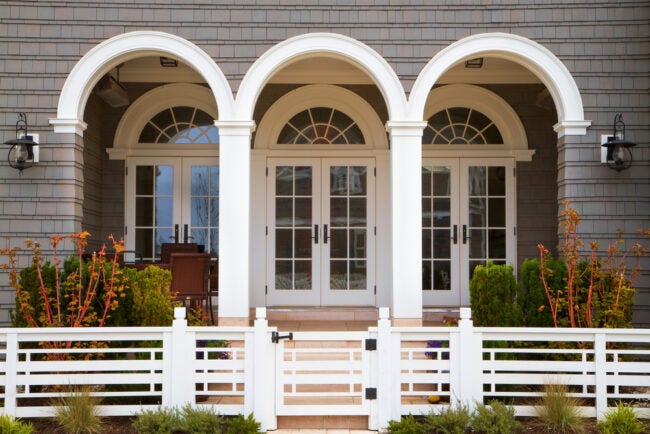 The graceful appearance of double doors opened to a sunny patio can make your home feel open and welcoming. French doors allow homeowners to bring the outside in, quite literally, and welcome fresh breezes into the home. Unfortunately, French doors are also a potential security risk to your home—but with a few thoughtful steps, you can render them safe and return to your enjoyment of their many benefits.

Why do French doors pose a potential security risk? When closed, French doors look roughly similar to sliding patio doors: two doorframes filled with either a single pane of glass each or a grid of smaller panes. The primary difference between sliders and French doors is the opening mechanism. While sliders move along a solid track and overlap each other, French doors are actually two separate hinged doors that meet in the middle and swing away from each other to create a single large opening. This feature is a large part of the charm of French doors—they offer a wide-open, unobstructed view to the outdoors. French doors can also be installed between rooms in the interior of a home to separate different living areas, and they are valued there for the same reasons.

Exterior French doors can be difficult to secure. Why? The biggest challenge is that the two doors latch and lock to each other, so when they’re locked, two mobile panels are secured to each other rather than to a fixed point. The seam in the middle of the two doors is the weakest spot, where a sharp kick or shove can dislodge them from each other and provide access to your home. A secondary danger stems from one of the doors’ greatest features: the glass. Homeowners install French doors to let in light and to frame a view, so a wide expanse of uninterrupted glass is a primary part of the structure. This can allow potential intruders to see the inside of the home and survey what valuables are on display. A large area of glass can also allow intruders to shatter it for easy access to those belongings.

Before you begin shoring up the safety of your French doors, you’ll need to assess your particular situation. What security measures are already in place? Is your double-door lock set old or loose? You’ll need a reliable measuring tape to make accurate measurements, and a trip to the home improvement store to get some supplies, but in general these upgrades are approachable projects for a handy homeowner.

Protect your home and family with a top-notch security system. Vivint’s professionally installed systems don’t just alert you to threats—they help both prevent and deter them. See Vivint’s cameras and services.

STEP 1: If installing new French doors, measure the doorway precisely to ensure the doors will fit the space exactly.

If you’re just adding French doors to your home or replacing old ones, you’re in an excellent position to make sure they are installed as securely as possible right from the beginning. While some consider the installation of French doors a DIY project, it is really a job best left to professionals. That’s because the snugness of the fit between the doors and the frame is absolutely critical for their security—if the space in which the doors are installed is even slightly too large, they won’t close or be able to be secured properly. For homeowners who still want to install the French doors themselves, it’s best to choose a set of prehung doors that are already in the frame. Using doors that have a preset fit means the homeowner is just responsible for fitting the frame into a door opening, then sealing around it.

A contractor who is installing the doors for you still needs precise measurements. Check with the contractor to ask which measurements they’ll need: standard measurements include the height and width of the opening at several points, along with a diagonal measurement. It may be easier to ask the installer to take the measurements to make sure they are completely accurate.

Another consideration for new French doors is which way they should open: into the home or outside. You’ll need to measure the space where the doors will swing to ensure that they have the clearance they need to open and close fully with no obstacles.

New French doors can come equipped with hurricane-rated glass, impact-resistant glass, reinforced glass, or laminated glass. These are all labels that indicate the glass in the door is coated with a shatterproof material: upon impact, the glass will break, but the coating will keep the broken glass in a sheet that is difficult and painful for an intruder to penetrate. It’s also helpful if a tree branch or piece of patio furniture strikes the door during a storm.

For existing doors, an add-on glass security film is available for purchase in a variety of types and styles. Similar to the coating on a new impact-resistant door, security film is a very, very thin sheet of vinyl that can be applied to both sides of the glass in French doors. The vinyl will bond with the glass and provide security by holding the glass shards together on impact. Security film is available in large sheets and can be cut easily for application to smaller panes of glass. In addition to clear film, which will not obstruct the view, security film is also available in frosted or patterned versions that provide additional security by preventing potential thieves from peering through the door to see what valuables are on display. If using clear film to maintain the view through the door, consider installing a curtain or blinds to close off the view from outside.

Once the glass is secured, it’s important to determine the best way to keep the doors closed and firmly locked. First, immediately consider replacing the hinges that came with the doors. Especially if they’re older, they may have developed rust or corrosion that, in addition to being unsightly, can reduce the strength of the hinges. Choose hinges that are strong and at least 3 inches long, and select hinges that are secured with a hinge bolt (a screw that drives into the hinge and prevents the door from being lifted off it). Without the hinge bolt, an intruder can pop the door up off the hinge, angle it, and step into the house.

Once the hinges are secure, it’s time to turn your attention to the doors themselves. A simple handle twist lock for French doors won’t be enough, and a plain deadbolt (while better than a handle lock because of the length) won’t be, either—all an intruder needs to do to defeat these locks for French doors is to pry the doors a little way apart at the center, and the locks will slip free. In a set of French doors, one door is called the passive door, which is the door that locks to the doorframe itself. This is usually achieved through one or more flush bolts that slide into the frame of the door. Then, the active French door panel secures to the passive door. But these flush bolts can be bypassed fairly easily. The first option to increase the security of the doors is to close the passive door permanently. This is accomplished by driving a small screw into the flush bolts so that they cannot be opened until the screw is removed. This is a reversible option, so the doors can still both be opened as needed by simply removing the screws. Kits are available at home improvement stores, often sold as a French door lock set or as double-door locks, that include flush bolts and other hardware to permanently secure the passive door.

If you prefer both doors to remain fully functional, consider a multipoint lock system. Also called a French door locking system or French door locking mechanism, these systems secure the active door at three or more points, and all open with a single key or switch. The multipoint locking system makes it more difficult to separate the doors and is especially effective if the passive door is secured permanently. Alternatively, consider adding a strong deadbolt or mortise lock to both the top and bottom of the active door. Both of these options may include keyed exterior locks, making your French door a truly functional home entry door.

Need a home security system? SimpliSafe can help. With a comprehensive whole-house solution, you can be prepared for the unexpected. View SimpliSafe systems and prices.

Adding security bars and using other safety devices can go a long way toward making French doors more secure. The latches for security bars can be unobtrusively attached to the inside of the doors (some attach to the doors and the doorframe), and a metal or wood bar can be slid into position to prevent the doors from being pushed in or pulled open. If the doors open in, consider adding two door-jammer bars, one underneath each handle, to prevent each door from being pushed in. A third solution is a handle lock, which is a device that slips over each of the door handles, regardless of whether they are knobs or levers, and secures them together. These add structural support to the center of the door and prevent the handles from turning.

French doors are typically installed on the back side of homes, opening into the private spaces of the yard that aren’t visible to passersby. Unfortunately, this also means that the watchful eyes of good neighbors won’t be able to see someone trying to break in—the cover of the house itself, the landscaping, and the natural absence of light in the backyard will offer great cover for burglars. A home security system can provide several layers of protection for your French door.

First on the list: deterrence. Visible security cameras and motion-sensor lighting will discourage an intruder from choosing your home. They prefer the cover of darkness, and they prefer not to be observed. Security cameras may be enough to convince them to move on, and if not, the bright lights that come on when they step into the yard should do it.

If intruders aren’t wise enough to leave at that point, the cameras will capture their appearance, and the professional monitors at the best home security companies will immediately notify you and local law enforcement that a break-in is occurring. This will give you time to secure yourself and your family, leave the home if possible, and will get help to your home as quickly as possible. Home security companies also offer sensors for French doors, including sensors that will alert if the doors are open, and others that will notify your alarm company if the glass is broken. This layer of security can provide peace of mind and let you focus on what’s important—getting yourself and your family to safety—should a break-in occur.

There’s no need to forgo the openness and beauty of French doors in the name of home security. While French doors will never be as secure as a solid-core steel door secured with a long deadbolt, the layers of security that can be added through careful installation, improved hinges and locks, window film, door security tools, and monitored home security can let you enjoy both the view through your doors and the easy comfort that comes from knowing your home is safe.

How Much Does it Cost to Replace a Sliding Glass Door?

The Best Retractable Screen Doors of 2022