How to Dispose of Bacon Grease: 4 Solutions That’ll Save Your Plumbing

These methods of bacon grease disposal can protect plumbing and make future cooking even better. 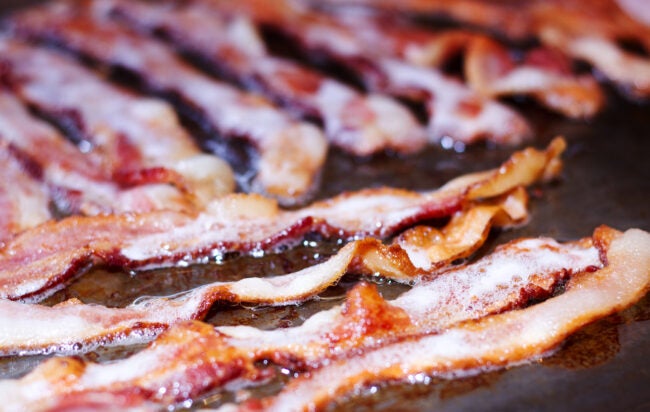 Q: I have a pan full of bacon grease. Is it OK to just wash it down the drain with a little soap?

A: Unless you enjoy having the plumber over as a frequent guest, you should never dump bacon grease into the sink. For one thing, whatever you wash down your drain eventually makes its way into the groundwater. So you want to be careful about quite literally poisoning the well.

But rendered bacon fat doesn’t stay in its liquid form; it hardens right back up again. So essentially, you’re coating your pipes with a solid fat that over time will build itself into a gnarly sink clog. There are many ways to dispose of bacon grease safely, or even save it for future use. Out of all of them, dumping grease down the drain is the worst possible choice.

Save bacon grease for future cooking.

If you’ve never had eggs fried in bacon grease, you’ve been missing out on the ultimate breakfast treat. Indeed, bacon grease is just like any other kind of fat used for cooking. It coats a pan, flavors as a spread or topping, and adds mouthfeel to proteins, vegetables, and carbs. Use it for anything from frying catfish to roasting Brussels sprouts to starting your gravy. You can even toss your popcorn in it or bake it into your cornbread.

Saving bacon grease for future use at home is easy. Any time you cook bacon, allow the grease to cool a bit. While it’s still warm and liquid-like, strain it through a fine wire mesh, cheesecloth, or a coffee filter into a heat-proof, wide-mouth container, such as a mason jar. Those with airtight lids work best.

However, if you’re adding to your stash of bacon grease from time to time, this will destabilize it. Change containers and date it every time you add to it so that you know how long it’s been around.

Allow the grease to cool in the pan and scrape it into the trash.

If you haven’t made a lot of bacon and there’s just a little grease, you can get by with soaking it up with a paper towel and tossing it into the trash. If you’ve fried a lot of bacon, pour cooled liquid grease into a designated bacon grease container, such as a take-out container, and dispose of it.

Another option: allow the bacon grease to harden in the pan, then scrape it into the trash. Remember, the pan can’t go into the sink for washing until you’ve gotten rid of the grease, so give it a quick wipe with a paper towel after scraping out the bulk of the grease.

Bacon grease shouldn’t be composted, either. Your home compost pile doesn’t get hot enough to break down those kinds of fats.

For healthier bacon and easier disposal, bake it on a grill pan. Line the pan underneath the grill apparatus with parchment paper to catch the grease. Allow the grease to solidify before tossing the paper away.

You can also line the pan with a silicone liner for the same purpose. In this case, scrape the solidified fat off into the trash before washing the liner and pan in the sink. That way, you won’t harm your pipes.

If health effects of the fat are not of concern, you don’t have to worry about the grill top. Just line a sheet pan with parchment paper or a silicone mat and bake the bacon right on top. This not only saves time, but it keeps your arms from getting pinged by splattering fat on the stovetop.

Solidify grease with a specialty product before discarding it.

If you have somewhere to go or don’t want to wait for bacon grease to cool, stash the pan in the refrigerator or freezer. The grease will congeal faster. You can also use specialty products, such as the organic, plant-based Hard Oil or FryAway.

Both of these powders are intended for use when the oil is still hot and purport to transform the rendered bacon fat into a solid mass. However, you still will have to scrape the pan. These products can be more useful for transforming larger quantities of oil, like when you’re frying French fries or chicken.

The Dos and Don'ts of Clearing a Clogged Sink
Advertisement

8 Home Hazards—and How to Mitigate Them

Make Your Home Less Chaotic With These 12 Simple Changes