Get the low-down on the different types of electric drills. 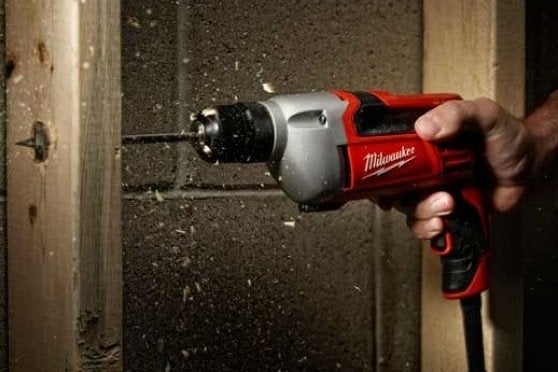 The electric drill is about as versatile as a tool can get. It drills holes of many kinds, of course, but it can sand and grind, too, as well as drive screws. And it can stir paint or plaster. Not too many years ago, drills with specialty attachments were commonly used as routers and even saws, but other purpose-made tools have now, for the most part, taken the place of such attachments.

Power drills are manufactured in a number of sizes. The large are distinguished from the small on the basis of chuck capacity.

The chuck is the set of jaws that grips the drill or bit which does the actual cutting. In the familiar, pistol-shaped drill, the chuck is lo­cated where the barrel of the gun would he. A specially made key with a beveled gear on its end is used to tighten or loosen the chuck in most models. The size of the chuck denotes the largest diameter drill it will accommodate.

Keyless chucks are available, both on new drills and to retrofit others. If you’ve ever invested frustrating minutes in attempting to find a missing chuck key, you’ll understand the inspiration that no doubt led to the invention. The keyless chuck is larger than the traditional chuck, and its size and molded shape can be gripped securely in your hand to tighten the bit in the chuck.

Many drills come with a locking button that, when the trigger is depressed, locks it in place for continuous running. The trigger lock is released by pulling the trigger again. While smaller and larger capacity drills are available, the great majority of needs are served by either a three-eighths-inch drill or a half-inch drill. The cordless three-eighths drill is another popular option. The well-equipped toolbox might well contain all three, but to my way of thinking no homeowner is properly equipped without at least a basic, three-eighths model.

Three-Eighths-Inch Drill. This size drill is affordable, small enough to be hefted comfortably in one hand, and practical for a great many uses. Most models of this chuck size have a pistol grip and trigger control.

For a few extra dollars, most manufacturers offer two very useful options. One is trigger-controlled variable speed, the other a switch that reverses the direction in which the drill turns. Both are well worth the modest additional cost.

Being able to vary the speed makes it easier to start holes, drive screws, and drill metal (metal is drilled and cut at slow to medium speeds). The reversibility option can help reverse drills out of holes and remove screws.

A wide range of electric drills are available with more or less power (one-half horsepower is about average) and with various maximum speeds (most models top out at between twelve hundred and twenty-five hundred revolutions per minute).

Half-Inch Drill. This is a more powerful model, typically with a three-quarter horsepower motor. Half-inch drills are available in pistol-grip configurations, but for some of the demanding drilling to which the half-inch drill is well-suited, a bulkier configuration that features a closed handle at the rear and an auxiliary grip on the side of the drill’s body is probably the most generally useful. The added handholds allow you not only to steady the tool as it drills, but to apply additional pressure while drilling. Working two-handed will also help insure that if the drill becomes caught in the work the drill won’t twist itself out of your grip.

Most half-inch drills are designed to turn at fewer revolutions per minute, but have more power. That makes them indispensable for drilling large diameter holes through dimension lumber and timber (for utility lines), in mixing plaster or joint compound, or for other heavy-duty tasks.

Cordless Drill. These tools are convenient: There’s no cord trailing you up the ladder or circling your feet, threatening to trip you up. They can be used almost anywhere, even miles from the nearest electrical outlet. For some tasks, they’re just about essential.

With the good news, though, there’s a bit of bad news, too. Cordless drills are heavier than corded drills, because the power source is a rechargeable battery that adds weight. Most designs are well balanced, but if you’re accustomed to using a traditional drill, the added weight will feel strange in your hand, at least at first.

Cordless drills also have less power available to them, so for some drilling and driving jobs the built-in clutch on most models will, from time to time, alert you to the limited power of the cordless drill (the bit will stop turning and you’ll hear the clutch clicking). Newer models have improved torque, but raw power just isn’t the forte of the cordless drill.

Remember that the cordless drill works only as long as its battery is charged. The charge will last a surprisingly long time (many days, given only occasional use), and professionals keep a spare battery on hand. Most models recharge in approximately an hour.

Other Options. For making holes in concrete, a variation of the power drill called a rotary hammer is available. It delivers its power in a hammering motion as it drills, using specially designed percussion bits. Some models hammer out tens of thousands of strokes per minute. Another purpose-made drill is an impact wrench, which is used for tightening (or loosening) nuts and bolts. The impact wrench is a standard in auto shops.

The Best Hammer Drills of 2022

The Best Cordless Drills of 2022