There are several types of wood glue you can use. Here's some advice to help you decide which would be the best for your situation. 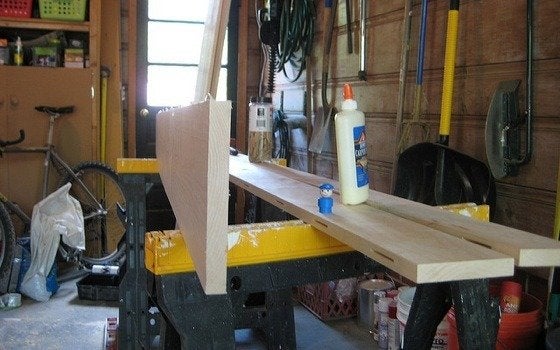 Glues really used to be made from old horses (the hoofs, skins, bones, and other parts, when boiled, produce a protein gelatin that forms the glue base). Such organic hide glues are still in use today, though fine furniture res­torers are most likely to use them when repairing pieces of cherished antique furniture in homes and museums.

The once clear usage line has been blurred between the word glue (traditionally used to refer to such organically based materials) and the word adhesives (for manmade materials). Today, most wood is glued together using glue consisting of manmade polyvinyl or aliphatic resins.

Polyvinyl Acetate Resin Emul­sion Glue. Also called white glue, polyvinyl resin glue is a near relation of that white stuff we used in grade school that was sold under the brand name Elmer’s (and, today, under that and about a hundred other names). It will glue china, paper, and wood.

White glue sets fairly quickly, hardening as the moisture contained evaporates and the glue line becomes transparent. It cures hard in a few hours, though when you are clamping glued pieces together, it’s best to let them set overnight. When buying white glue, be sure that you are buying full-strength glue, since some are watered down for children’s use.

Polyvinyl resin is not water­proof, so is not suitable for damp or exterior application. Also, in situations where the glued pieces will be near a source of heat like a furnace, fireplace, or heater, other glues would be preferable. But white glue is inexpensive, easy to use, non­toxic, and non-flammable. It has a long shelf life (when kept properly sealed), and won’t stain your tools or most work-pieces, though metals and oak are exceptions to that rule. White glue works best at room temperatures.

Aliphatic Resin Glue. The generic name carpenter’s glue describes the aliphatic resins. Like the white glues, these are sold in squeeze bottles, but aliphatic resin glues are actu­ally much stronger than the polyvinyl resins.

This creamy yellow glue dries very quickly (you can leave the pieces clamped a minimum of an hour, but two hours is preferable, and there’s no harm in waiting still longer). Carpenter’s glue is easy to use, dries a translucent amber color, and is more easily sanded than white glue, which tends to soften due to the heat of the sanding process. Like white glue, however, carpenter’s glue is not for use in damp or exterior applica­tions. It sets more quickly at warm temperatures, but can be used effectively at tempera­tures as low as 45 degrees.

Resorcinol Formaldehyde Glue. Though there are other moisture-resistant glues avail­able (including urea formal­dehyde resins), resorcinol glue is completely waterproof and can be used on aquatic equipment (like boats and water skis) as well as exterior finish on doors, windows, and moldings. It dries a deep maroon color.

Resorcinol glue is expensive, and must be mixed at the time of use, blending the resin and a catalyst. It also requires eight to ten hours to set and can only be used at warm temperatures. Resorcinol is less convenient to use than carpenter’s glue, but it’s the only option for joints that will reside in damp locations.

Other Adhesives. Contact ce­ment is bought premixed, often in small bottles, and is invaluable for attaching (or reattaching) veneers. Epoxy bonds metals and glass to wood but, like resorcinol, re­quires mixing. Milk-based casein glues are useful for gluing teak, ebony, and other oily woods. Neoprene cement works well with tile.

The Best Glues for Cardboard of 2022