The Best Small Cities to Live in in 2022

If you’re looking for a slower pace, a lower cost of living, and that small-town feel, consider one of these top-ranked cities. 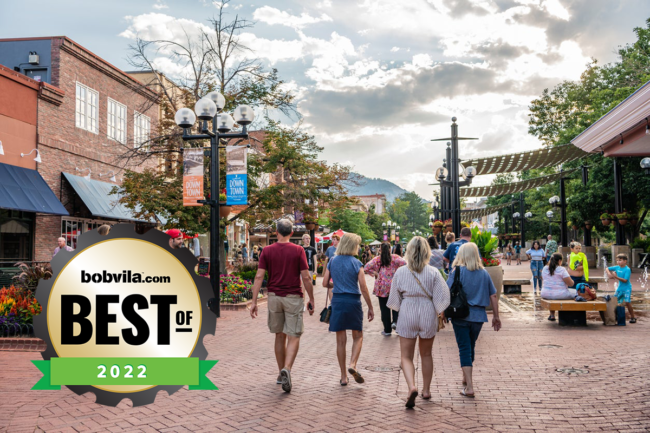 If you’re tired of the hustle and bustle of living in a big city or the traffic that follows you to the suburbs, you might be considering making a move to a small town. There are wonderful small towns in every state across the country, and each one has something positive to offer its residents. From a lower cost of living, a slower-paced schedule, less traffic, and generally lower crime rates, there are several reasons you might be thinking about changing your way of life to take advantage of everything small towns have to offer. And, with more companies offering fully remote positions since the COVID-19 pandemic began, you might be able to keep your current job, or enjoy a wide selection of prospective remote positions, even if you move far away from the city.

Over the past few months, the real estate market has finally started to cool down after record activity during 2021. According to Redfin, new listings have dropped more than 40 percent since the end of April 2022. In that same time period, the median sales price has also dropped significantly in major metros areas. The number of Redfin users searching for properties outside of their metro area increased to a record high of 33.7 percent, according to July statistics. With cooling prices, now could be the right time to make the move to a small town. Avoid real estate regret by doing some thorough research on the town(s) you’re considering to make sure you’ll be happy with your decision.

The 10 cities listed below all ranked in the 99th percentile in the 2022’s Best Small Cities in America assessment from WalletHub. Based on Wallet Hub’s rankings, which examined affordability, quality of life, safety, economic health, education, and 38 other key factors, these towns are all among the top 1 percent of small cities in America (1,300 were evaluated by WalletHub).

Lancaster, Pennsylvania may be most widely known for its large Amish population, but it is also home to a diverse group of individuals. The city—which earned the highest score based on WalletHub’s evaluation—has a long history tracing back to 1709 when it was first settled by German immigrants. Lancaster ranked first for having the lowest crime rate, placed 10th for the quality of life criteria, and was 59th in terms of safety. It is located just 70 miles west of Philadelphia, allowing you to enjoy all the benefits of living in a small town, while still being able to access the big city when desired.

Located in Hamilton County, Carmel, Ind., earned the No. 2 spot in WalletHub’s rankings of the best small cities. Some of the areas where the city really stood out in the rankings include affordability, economic health, and safety. Carmel ranked in the top 40 (out of 1,300) for each of these categories. Niche also highlighted the splendor of Carmel by selecting it as the best place to live in Indiana. The city was awarded Niche’s highest score of A+ for its public schools, housing, and being good for families. Carmel is about a 30-minute drive north of Indianapolis, and just a few miles away from Zionsville and Westfield, two of the other top 10 small cities according to WalletHub.

RELATED: 10 Things to Do Now if You Plan to Buy a House Next Year

Head to northeast New Jersey in Bergen County, and you’ll find Fair Lawn. This small town has a population of just over 35,000, but it is close enough to New York City for commuters to easily get to the Big Apple. Fair Lawn ranked 29th for safety and education and health, and in the top 150 for affordability and economic health, according to WalletHub. The city’s motto sums up why Fair Lawn did so well in the rankings: “A great place to visit and a better place to live.”

Lexington is one of three Massachusetts cities to make the top 10 according to WalletHub. Lexington placed fourth for education and health, seventh for safety, and fourth for having the highest percentage of insured population. In 1642, when the farming town of Lexington was first settled by immigrants, it was considered part of Cambridge, Mass. However, in 1712, it was incorporated as its own city. Following World War II, Boston’s urban area grew, and more and more people began moving to Lexington. Despite the growth, the city still remained relatively small. Today, the population is just over 35,000.

Drive just 9 miles south of Nashville, and you’ll arrive in beautiful Brentwood, Tenn. When you see it ranked 34th for affordability and in the top 100 for safety and economic health, you may want to start checking out the best real estate websites for home listings in Brentwood. In addition to being one of the best small cities in America, Brentwood is also one of the wealthiest cities in the country, with a median income of over $160,000.

Melrose, Mass. is a Boston suburb that offers a peaceful vibe with its numerous parks, gorgeous Victorian homes, and open fields. Melrose did well in WalletHub’s rankings, coming in 10th for education and health, 22nd for safety, and 78th for economic health. You’ll find plenty to do in this small town, whether it’s golfing at one of two golf courses, attending a performance by the century-old Melrose Symphony Orchestra, or visiting Ell Pond in the city center.

RELATED: 12 Ways Buying a Home Has Changed Over the Past 50 Years

With a population right around 32,000, Zionsville, Ind., is another one of the best small cities you might want to consider, especially if you’re looking to make your dollars go even further. The city ranked third for affordability, according to WalletHub. Some of the other categories where Zionsville performed well, ranking in the top 200, include education and health, economic health, and safety. Zionsville offers more than 500 acres of parkland, several historic buildings, unique boutiques, art galleries, and popular restaurants.

Needham, Mass., is another Boston suburb to make WalletHub’s list. Many residents commute to the city, since Needham is only about 20 miles southwest of Boston. Needham ranked 20th for education and health, 26th for safety, and in the top 200 for economic health and affordability. If you love winter weather, this small city may be a good fit for you—it sees an average of 50 inches of snowfall every year. Once winter is over, prepare yourself for a pleasant summer with average high temperatures just under 80 degrees.

RELATED: 25 Tiny Towns to Visit for a Glimpse at How We Used to Live

Despite being the largest city in Maine, Portland still is a relatively small town with a population just under 70,000. With the cobblestone streets, local shops, and artisans, the city offers a welcoming feel. Placing ninth overall in WallHub’s rankings, Portland also ranked 13th for quality of life and 58th for education and health. However, before you start planning to move to this small town, understand that it is not the most affordable option, ranking 1056th out of the 1,300 cities that were evaluated.

Westfield is the third city in Indiana to make it into WalletHub’s top 10 list of the best small cities in America. The city is conveniently located about 30 minutes to the north of Indianapolis, allowing residents to visit the bigger city with ease. Some of the highlights of Westfield include the Monon Trail, which connects to Indianapolis, the Westfield Playhouse community theater, the quaint antique mail on Main Street, MacGregor Park, and the many locally owned restaurants. Westfield ranked 37th for safety and 41st for affordability, according to WalletHub.

RELATED: 50 Tiny Towns That Attract Hordes of Tourists Every Year

The Best Cities in America for Flipping Houses in 2019

These Are the 10 Best Cities for Downsizing in 2022