Do you remember linoleum rugs? At one time, they were hugely popular and today, they're a great, noncommittal way of participating in the comeback of this retro yet eco-friendly flooring material.

Linoleum rugs are a little-remembered footnote to floorcovering history. These days, unless you uncover one when you’re ripping up an old floor, you’re unlikely to find a linoleum rug outside of a vintage shop. But their half-century or so of popularity makes them worth a moment of consideration.

Listen to BOB VILA ON LINOLEUM RUGS or read the text below: 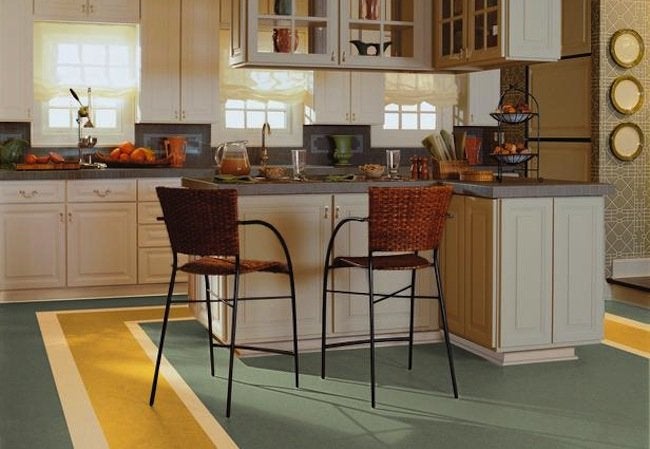 Introduced in the late 1800s, linoleum was first produced by coating a fabric, such as burlap or canvas, with a mixture of linseed oil, cork, resins and wood flour. The easy-care, resilient flooring was perfect for high-traffic areas—kitchens and hallways, for instance.

Although early linoleum was available primarily in solid colors, patterns became more sophisticated as production methods advanced. By the early 1900s, manufacturers began to offer linoleum rugs—essentially movable, highly patterned sheets of linoleum with decorative borders. They tended to mimic textiles—oriental rugs and intricate florals—but unlike their “real” counterparts, they could just be wiped clean.

By the 1950s, the rugs’ popularity began to wane as less expensive vinyl entered the market. Today, however, true linoleum is enjoying a comeback of sorts, thanks to its relative eco-friendliness and the advent of brighter colors suited to modern interiors. Some fabricators are even making linoleum rugs that unlike their predecessors, aren’t pretending to be something else, but instead celebrate what they are.

20 Area Rugs You Can Actually Afford

The 6 Biggest Myths About Central AC