Boil Water Advisory 101: How to Safely Sanitize Water at Home During an Emergency

Whether it’s due to contamination or natural disaster, our water supply is sometimes declared unsafe to drink. Knowing how to sanitize water in an emergency prevents illness and provides peace of mind until the water advisory is lifted. 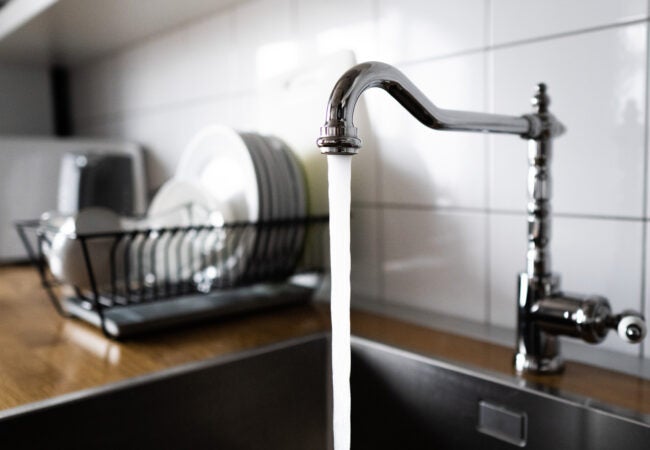 When a boil water advisory is announced, it can’t be ignored. These advisories mean that your local water source may be contaminated with dangerous pathogens that can make you sick. Until the water is rendered safe to drink again, you may have to boil it to kill germs and protect yourself and your family from illness.

If your community issues a boil water advisory, you’ll need to sanitize it for drinking, brushing your teeth, cooking your food, and for any other activity in which water could be ingested. Local health officials put out this type of advisory along with general information about food preparation, drinking, and other hygiene guidelines you may need to follow.

When to Boil Water

A boil water advisory doesn’t require boiling every drop of water that enters the house. Typically, it’s only the water that will or could be ingested that should be sanitized. According to the Centers for Disease Control and Prevention (CDC), the following household activities require boiled water:

However, other activities and household jobs do not require boiled water even during a boil water advisory. These activities include:

Some activities can be done without boiling water, but they need to be done carefully, such as washing dishes. A dishwasher that reaches a rinse temperature of at least 150 degrees Fahrenheit (or has a sanitization cycle) can safely be used during a boil water advisory. If hand-washing dishes, wash and dry the dishes in hot soapy water per usual. Then, rinse them in a separate bin or basin that contains 1 teaspoon of unscented liquid bleach per gallon of water.

Adults can shower and bathe as usual. Babies and young children may accidentally swallow water during bath time, which is why you might want to give them a sponge bath during a boil water advisory—this is the best way to keep water out of their mouths. Alternatively, boil children’s bathwater, let it cool to a safe temperature, and then bathe them.

RELATED: 10 Times Boiling Water Can Help Around the House

Handwashing is safe, unless advised otherwise, as long as it’s done correctly. That includes scrubbing the hands with hot soap and water for at least 20 seconds. When soap and water aren’t available, an alcohol-based hand sanitizer with at least 60 percent alcohol will also get hands clean.

Pets can become ill from many of the same germs that sicken people, so be sure to boil their drinking water too.

How to Sanitize Water by Boiling

Boiling water kills viruses, bacteria, and parasites that make people sick. If the water to be boiled is clear and free of debris, here’s what to do:

Sanitizing cloudy water requires a few extra steps. Here’s what to do:

How to Sanitize Water Using a Disinfectant

When boiling water isn’t an option, it can be rendered safe to drink in other ways. Disinfectants can kill most viruses and bacteria, but are less effective against parasites. Common disinfectants include unscented household liquid chlorine bleach, chlorine dioxide tablets, and iodine (though in certain circumstances, iodine is not recommended).

To use chlorine bleach to sanitize water, the CDC recommends the following steps:

If the water is clear, start at step 3.

If using chlorine dioxide tablets to sanitize water, follow the instructions on the manufacturer’s packaging. These tablets are effective against Cryptosporidium, whereas bleach and iodine are not.

If iodine tablets are used, the sanitized water is not recommended for pregnant women, those with thyroid conditions, or iodine sensitivity. It is also not recommended to consume iodine-treated water for more than a few weeks at a time.

RELATED: 8 Tips for Disinfecting with Bleach

How to Sanitize Water Using a Filter

Portable water filters, like those used for camping and hiking, remove most pathogens, including Giardia and Cryptosporidium. Filters with pores that are 1 micron in size or less can effectively remove these waterborne pathogens. However, these water filters may not remove bacteria or viruses, so it’s important to know what types of contaminants you’re trying to remove before using filters under a boil water advisory.

When using a filter to sanitize water:

For more information, check out the CDC’s guidance and recommendations for home and portable water filters.

How long does a boil water advisory last?

The boil water advisory will last until the germs causing the advisory have been lowered to safe levels or removed from the water supply. It could be a few days—and in some cases, a few weeks.

What should I do after a boil water advisory is lifted?

Flush all water pipes and faucets before using tap water again. Here are the basic steps to follow:

What happens if you drink unsanitized water under a boil water advisory?

If you drink contaminated water during a boil water advisory, there’s a chance you may get sick. The most common symptom is diarrhea.

Can you shower when there’s a boil water advisory?

According to the CDC, you can shower and bathe. However, do not swallow any untreated water. If you’re worried about accidentally swallowing, have a sponge bath with boiled (and cooled) water.

How can I wash dishes under a boil water advisory?

The safest course of action is to use disposable plates, utensils, and cups. Dishwashers are safe if the rinse temperature reaches at least 150 degrees Fahrenheit or it has a sanitize cycle.

Dishes may be washed by hand. After washing them in hot, soapy water and then rinsing them, however, you’ll need to sanitize them too. Fill a bin with warm water that contains 1 teaspoon of unscented household liquid bleach per gallon. After rinsing the dishes, soak them in the basin for 1 minute and let the dishes air dry before using them.

15 of the Cheapest Places to Buy a House in the U.S.

15 Things Never to Put in the Microwave