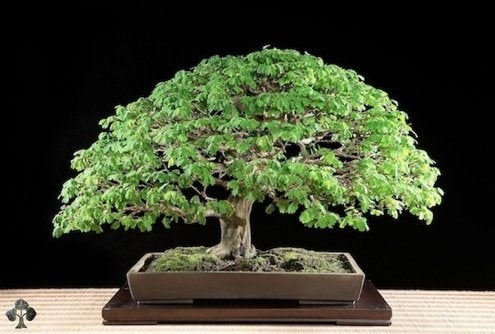 Bonsai—caring for and nourishing miniature shrubs and trees in pots—has long been a way for hobbyists to reduce stress and demonstrate their gardening skill.

Originally called penjing by the Chinese (before its adoption by the Japanese), bonsai cultivation has been traced back to 800 AD, when it was a favorite activity of Buddhist monks.

This ancient art can look intimidating, but with the right approach it can be a soothing meditation and a challenging test of one’s green thumb. Because the pots are so small, the bonsai have less soil from which to draw nutrients, so they need more attention than would an outdoor planting of the same species.

Before purchasing a bonsai, ensure that you are buying a suitable species. Your selection should be able to produce new buds on old wood; should have short distances between leaf nodes; and should have leaves capable of being reduced to smaller size. A bonsai must also be able to withstand root disturbance. Some of the more traditional species include junipers, maples, and pines. Flowering bonsai include azalea, Cherry, and Japanese quince.

Most bonsai need strong sun. To provide adequate light to all sides of the plant, turn it back to front every month or so. Be sure to give your bonsai some outdoor time as well: A species that comes from an area with hard winters will need periods of cooler temperatures to thrive, while a tropical species will enjoy summer heat.

Without pruning, a bonsai grows into a regular tree—but avoid the novice mistake of over-pruning. Only prune as new growth matures, not every time a new leaf appears. Follow the plant’s natural inclination, pruning only to keep growth in balance. Advanced gardeners are able to create a more pleasing shape by wrapping a bonsai trunk with aluminum wire.

To keep the roots healthy, you’ll have to re-pot bonsai as often as twice a year, each time trimming the roots by about one third and mixing into the soil a measure of organic, slow-release fertilizer. The latter encourages roots to take in nutrients and not crowd the pot.

Water your bonsai as needed, keeping the soil slightly damp, not wet. The top soil should be dried out, but not the soil below. Battle dry indoor environments by misting the leaves on occasion.

For more on gardening, consider:

6 Types of Bonsai Trees That Are Best for Beginners
Advertisement

The 22 Best Trees to Grow Indoors

The 7 Best Etsy Stores for Houseplants

The Best Gardening Subscription Boxes of 2022