I Tried the DeWalt Cordless Drain Snake in a Pinch: Here’s What Happened

Cordless drain clearing without a foot-activated actuator is a nice idea, but how did this snake stack up? Find out here. 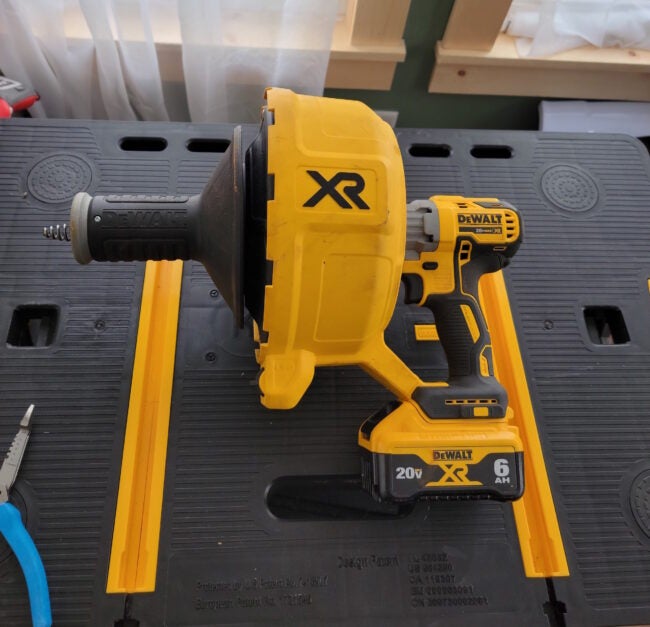 While I’m anything but a stranger to clearing clogs, I need to be completely honest: I hate snaking drains. It isn’t the fact that it involves waste. It’s that snakes are dangerous. More than once has my gloved hand gotten twisted in a spiraled nest of coiled steel.

But, when a drain in my own home clogged up and became unresponsive to plunging, I picked up the DeWalt Cordless Drain snake from my local hardware store, and what I found while using it surprised me.

It wasn’t my first choice.

When I was purchasing a snake, I didn’t want to spend a lot of money. I saw the DeWalt Cordless Drain Snake on the shelf, but originally opted for an electric model with a foot pedal actuator. However, the electric snake I purchased was broken, and there were no other options in the store. I was in a serious bind and needed something. So, I returned my electric snake and purchased the DeWalt cordless drain snake.

Keep this point in mind: I did absolutely no comparison shopping other than selecting a snake with a coil that was long enough for my needs.

I bought the “tool only” version of the DeWalt cordless drain snake. It has a 25-foot-long, 5/16-inch-thick cable with a bulb-shaped tip on the end. It runs on the DeWalt 20V Max battery system, has a variable speed trigger, a nose cone cable lock, and a built-in LED work light. The bulb tip is not swappable, but the drum is removable, so upgrading to a larger cable is possible.

Get the DeWalt Cordless Drain Snake at Amazon for $269.10

It had a lot of power.

I knew this snake would draw a lot of battery life, so I installed a 6ah 20V battery to get as much run time as possible. Even with the heavy battery, the DeWalt would twist in hand while testing the trigger. I didn’t expect a cordless snake to feel that powerful, so I instantly had high hopes.

The cable lock was outstanding.

Usually, smaller snakes have clumsy bolts or collets the clamp down on the cable to keep it from coiling back into the drum during use. The DeWalt cordless drain snake’s nose cone cable lock is so much better. This cone slides back and forth to lock or release the cable, and it also provides a safe place from which to hold the tool. This was honestly my favorite feature—it’s that good.

It’s easier to use than a traditional snake.

The DeWalt’s size and nose cone cable lock make it really easy to use. With traditional drain snakes, the user needs to continuously feed cable by hand while pressing on a foot actuator. With the Dewalt, instead of coordinating between a foot actuator and a tricky cable lock, everything is in-hand. The trigger activates the snake, the nose cone locks the cable down, and the user can push the snake forward to make it around corners or through clogs.

I’ve already admitted I don’t like working with snakes, but the DeWalt cordless drain snake is much safer than is typical. Because the rotating drum hides behind the nose cone, there’s a safe handhold on the cone. Also, locking the cable and then moving the snake toward the drain is much safer than pushing the rotating cable into the drain by hand where it can wrap a glove, hand, or arm.

This product is not for everyone, though.

To be completely transparent, this snake is not for everyone. The 25-foot cable and bulb head are effective with sink and shower drains, but they’re not ideal for large sewer pipes from toilets. Also, the LED lights are bright and have adjustable angles, but I found them to be pretty much useless. And finally, there are much less expensive models on the market for occasional snaking.

I’m glad I bought it.

The DeWalt cordless drain snake might be a bit of an investment, but I’m glad I have mine. It’s the safest way that I’ve found to effectively clear a clog. And, should I come up against another clog that a plunger won’t clear, I’ll reach for this snake over a bottle of liquid clog remover, since I believe it to be safer and more effective.

Get the DeWalt Cordless Drain Snake at Amazon for $269.10

10 Emergency Plumbing Tools All Homeowners Should Have on Hand
Advertisement

The Best Cordless Drills of 2022

The Best Circular Saws Tested in 2022