Is the DeWalt Staple Gun the King of Tacking?

From fabric to wood and staples to brads, the DeWalt staple gun does it all. But can it live up to the hype? 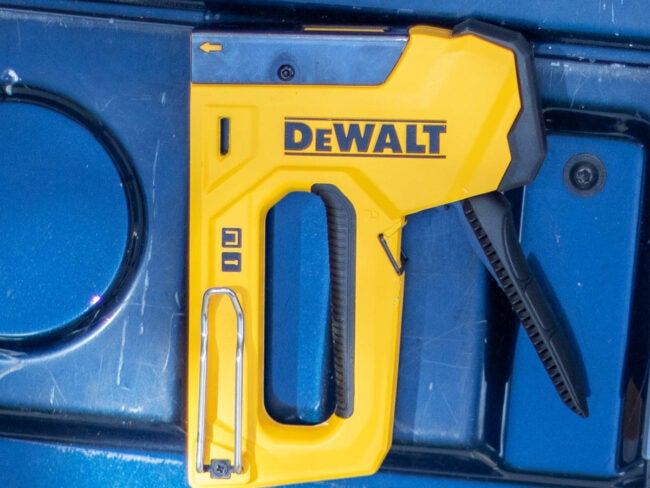 Staple guns are one of those long-standing, classic tools that all DIYers can use. They aid in reupholstering furniture, hanging holiday decorations, securing housewrap during a renovation project, and many more applications. In short, staple guns are handy, simple to use, and generally affordable.

But unfortunately, not every staple gun on the market is a high-quality product. Even some all-metal models that have been around for decades leave something to be desired. As a result, finding a reliable and durable staple gun can be a challenge.

If you’re hunting for the best staple gun, don’t make a decision until you read my hands-on review of the DeWalt staple gun. This model can act as both a standard 18-gauge staple gun and as a brad nailer, providing both stapling and nailing capability from a manual-driven option. And, with some of its built-in features, this staple gun might be worth checking out for pros and DIYers alike. Keep reading to learn more about the DeWalt staple gun to determine if it is right for you.

Verdict: This staple gun’s build quality and power secure it to the best overall spot over other manual-powered models.

It’s powerful, lightweight, and can hold a variety of fasteners.

When it comes to weight, this staple gun lands right in the middle of the pack. The lightweight die-cast aluminum gives it a weight of about 1 pound, which was very beneficial when I was stapling overhead or storing the gun in my tool belt.

The DeWalt staple gun can be loaded with several different types of fasteners: 1/4-inch and 9/16-inch 18-gauge staples to handle temporary nailing for posters and crafts and heavy-duty nailing in thicker materials. It can also hold 1/2-inch and 5/8-inch 18-gauge brads to hang small pieces of trim and crafts. There is also a handy built-in viewing window on both sides of the staple gun that reminded me when I was low on staples.

It’s easy to use, but loading brads wasn’t immediately intuitive.

I found the DeWalt staple gun easy to use, and it was simple to load the gun by releasing the plastic clip on the bottom and pulling out the spring-loaded slide. I could then drop an entire stick of 18-gauge staples into the magazine and lock it back in place. While this is an easy proposition, the durability of the plastic retaining clip is my long-term concern. Additionally, the indicators on the staple gun itself weren’t clear about how to load the brads, so this process wasn’t completely intuitive at first, though I soon discovered they simply require laying on the correct side of the magazine.

Firing the DeWalt staple gun involved simply squeezing the palm trigger toward the grip, making it one of the easiest guns on the market to use. Since there isn’t a safety on the tip like a pneumatic nailer or staple gun, it’s important to always point the gun in a safe direction. But, the design allows for placing it flat against a surface and pushing one’s body weight against the palm trigger if needed, so this gun is an excellent option for anyone with a smaller grip.

The build quality is exceptional for the price.

Compared to the prices of other manual staple guns, the DeWalt staple gun lands right in the middle of the pack. At right around $23.00, it’s worth noting that there are definitely more expensive models by other brands that aren’t as well-built or easy to use.

The DeWalt staple gun feels like a much more solid tool than most other staple guns I’ve used in the past. It delivers a smooth operation, and all the parts fit together well with no rattling. Even the belt clip is high-quality and strong, keeping the gun securely in place in a tool belt or the tool bag to which I clipped it. I’m not able to say that about many other staple guns—both more and less expensive. Many other staple guns shake and rattle in my hand and feel poorly made while in use.

I had no issue nailing thin pieces of trim in place, securing fabric or leather during reupholstery, and fastening thin sheets of luan board to construction lumber underneath. Truly, the only downsides to this staple gun are the plastic retention clip and the fact that loading brads wasn’t immediately obvious.

How We Reviewed the DeWalt Staple Gun

The best way I could think of to test a staple gun is just to put it through the paces of standard usage. Armed with a scoring rubric and a list of tests, I wanted to understand the full capability of the DeWalt staple gun. The tests included loading this manual staple gun with staples and brads (separately) and then fastening materials in place.

The first test involved stapling fabric, with which the gun had no difficulty, even with the longest staples I could place in it. The second test involved stapling through a piece of luan, which this staple gun was also capable of handling. Finally, to ensure all the features of the DeWalt staple gun worked as advertised, the third test involved loading the brads into the gun and securing a piece of trim to a piece of construction lumber. Again, the gun performed extremely well, and I rather liked this simple fastening option in a pinch.

I also tested the DeWalt staple gun against other manual staple guns in terms of build quality, weight, and design. The DeWalt’s lightweight, sturdy build and strong pocket clip stood out against the others and made it my clear favorite.

Should You Choose the DeWalt Staple Gun?

So, with all that background information on the design, use, and capabilities of the DeWalt staple gun, the question is whether or not you should choose it over other models. While there are other high-quality manual staple guns on the market, I believe the DeWalt staple gun is the overall best choice.

Typically, the best model of any tool tends to be on the more expensive end because these high-quality tools require more research and design, as well as better quality materials. However, while the DeWalt staple gun is well-designed and uses quality materials, it’s not expensive. As I mentioned above, this staple gun amazingly lands right in the middle of the price range, further solidifying its role as the best overall choice.

Overall, I found the DeWalt staple gun to be a nice blend of power, ease of use, and comfort—just what you should expect from the best overall choice. It’s lightweight, and the belt clip is sturdy, ensuring this staple gun stays safely and securely in place. In addition, it has the power to drive an assortment of staples and the flexibility to fire brads into thin trim without setting up an air compressor and making a ton of noise. In short, the DeWalt staple gun will not disappoint even the most discerning of shoppers.

The Best Cordless Brad Nailers of 2022

Building the Essential Toolbox: 20 Tools You Can't DIY Without