Solved! Why is My Flashlight Not Working?

Shine a light on those malfunctioning flashlight parts that are leaving you in the dark. 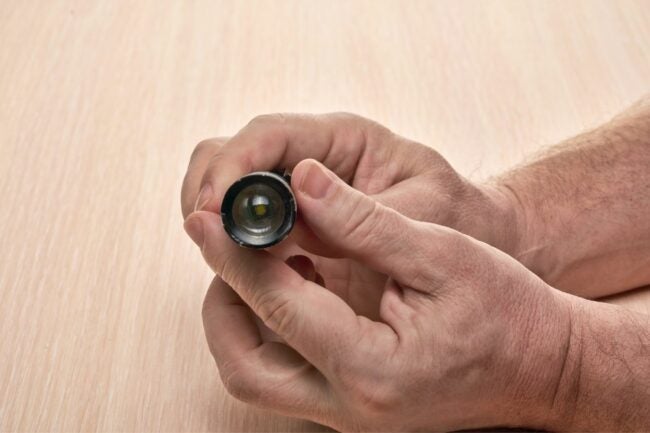 Q: Help! My flashlight won’t light up. I’ve only had it for a few months, so age isn’t the issue. Why is my flashlight not working? I’d appreciate any troubleshooting advice you can provide.

A number of causes can prevent a flashlight from working, ranging from the obvious dead batteries to the not so obvious corroded connections. Flashlights consist of a series of metal contacts that create a circuit between the battery and the bulb. If either the contacts or the battery fail, even the best flashlight won’t work.

The batteries are weak—or dead.

While this may seem obvious, more often than not, the culprit is the batteries. Most of the time, identifying a dying battery is easy. As batteries discharge, they release less and less power, causing most flashlights’ lamps to fade slowly from bright to dim before going out entirely.

If the flashlight has been sitting idle for an extended period, the batteries inside may have slowly discharged. While it typically takes a long time for this to happen, storing a flashlight with batteries in a hot environment can shorten the battery life. Rechargeable flashlights (and those using rechargeable batteries) will lose their charge more quickly when they sit idle.

You might also have a flashlight that uses regulated output, which allows the batteries to deliver a steady stream of light instead of slowly fading. When these batteries finally give up, the light won’t gradually fade. Instead, the light just suddenly cuts off.

The flashlight’s switch has malfunctioned.

A flashlight switch has two metal contact strips. When you push the switch to the on position, the strips contact the lamp and the batteries, completing the circuit and causing the bulb to light up.

Sometimes these contacts become corroded due to exposure to moisture, preventing one or both of the contact strips from making a clean connection. When this happens, the electrical current won’t pass through the corroded metal to complete the circuit. These contacts may also become bent or damaged, preventing the contacts from touching either the battery spring or the lamp.

If you can access the contact strips under the switch, clean them with a little bit of vinegar and check to make sure they haven’t become damaged or bent.

Related: 15 Things You Should Have At the Ready in Case the Power Goes Out

The contacts are bent or corroded.

In addition to the two metal strips in the switch, there are brass or copper contacts that touch the battery. These contacts typically consist of a spring and a flat metal piece, both of which are accessible via the battery case. The spring comes into contact with the negative end, creating tension that pushes the positive end against the flat piece. This creates a connection that completes the circuit in the flashlight, lighting the lamp.

Since the spring is typically made from thin metal, it’s possible for it to become bent so that it either no longer comes into contact with the battery or doesn’t create enough tension to push against the opposing flat metal piece. When this occurs, the connection is broken and the flashlight ceases to light. Open the battery case and examine these parts. If it appears the spring isn’t doing its job, pull it outward a few millimeters to give the spring more tension.

Like the contacts in the switch, the battery contacts also can become corroded either from moisture or even acid from a leaking battery. If corrosion is affecting these pieces, clean the batteries with a little isopropyl alcohol.

The inside of the flashlight is dirty.

Related: The Best Keychain Flashlights to Carry With You

The O-rings are broken.

If you find dirt or moisture on the inside of your flashlight, then it means the O-rings aren’t doing their job. Over time these rubber O-rings will wear, dry out, and crack, rendering them unable to perform their duties. Check the O-rings on your flashlight. If they appear damaged, replace them with new O-rings. If the O-rings look intact but appear to be a little dry, then apply a little silicone lubricant to them.

Solved! Why Is My Washer Not Draining?
Advertisement