Chainsaw won’t start? Here are some common operational issues and how to troubleshoot them. 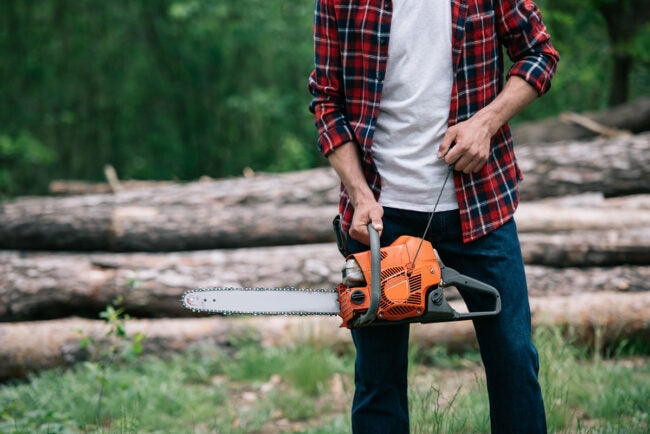 Q: My chainsaw won’t start, and I’m not sure what’s wrong with it. What’s the issue, and how can I fix it?

A: A chainsaw is a great tool to clean up fallen trees, trim unwanted branches, and cut up firewood. They can be stubborn when starting up, especially older models with wear and tear. There are a few different reasons why a chainsaw won’t start, depending on whether it’s a gas or an electric chainsaw.

Before beginning an investigation or troubleshooting the issue, though, always put safety first and operate under the assumption that the chainsaw could start at any time. Keep the saw facing away from people, vehicles, and structures and avoid baggy clothing.

Power tool repair experts at your fingertips
Get free, no-commitment estimates from experts near you.
Find a Pro

A spark plug might be defective and needs to be replaced.

If your chainsaw has a defective spark plug, it cannot create an electrical current to ignite the system. Remove the spark plug and inspect if it is dirty, cracked, eroded, or damaged. There may also be a heavy carbon buildup or a burned-up electrode.

The carburetor might be clogged and needs to be cleaned.

A chainsaw’s carburetor mixes air and fuel to start the internal combustion engine. If fuel has been left in the engine for too long, it can become sticky and clog the carburetor, preventing it from starting. If the clog is minor, clean out the carburetor. To unclog a carburetor, drain the fuel, spray the carburetor with a specialized cleaning solution, and wipe it clean.

If the carburetor is too clogged up to be thoroughly cleaned (or if repeated cleanings don’t get all the buildup out), it may need replacing. It could be damaged or old and no longer functioning.
To test the carburetor, remove the air filter, pour a teaspoon of fuel into it, and pull the starter rope. If the engine starts momentarily and then dies, the carburetor is likely why the chainsaw won’t start. To replace the carburetor, purchase one that is compatible with the chainsaw, then follow the manufacturer’s instructions to switch them out.

The ignition coil needs to be replaced.

The ignition coil is the device that sends voltage to the spark plug, creating a spark that ignites the fuel and turns on the chainsaw. If the engine is not turning on, then the coil may have become defective, which can happen over time with repeated use. Once you’ve confirmed that the spark plug is not the issue, purchase an ignition coil tester and follow the manufacturer’s instructions. If a spark does not occur during the testing process, it is likely that the ignition coil is defective and needs to be replaced.

The issue may be caused by a defective recoil starter that needs to be replaced.

A recoil starter allows the operator to pull up on the starter rope and engage the internal starting mechanisms to turn on the chainsaw’s engine. If the recoil starter is defective or assembled improperly, then the engine cannot start.

The chainsaw may have a broken rewind spring.

The chainsaw’s engine is flooded with fuel.

A fuel issue is one of the most common reasons why a chainsaw won’t start. If the operator has repeatedly been trying to start the chainsaw through the recoil starter system, they may have accidentally flooded the engine with fuel. A common indication the engine has been flooded is the smell of gasoline in the air. If you believe fuel has flooded the chainsaw engine, pull the starter cord several times while holding the throttle, dry and replace the spark plug, and then try starting the chainsaw again.

The choke is activated in warm weather.

Many chainsaws have a choke position that is used to start the saw in cold weather. This setting helps increase the air and fuel mixture’s richness in the carburetor to improve the fuel flow. If the choke is activated in mild or warm weather situations or after the chainsaw has been in use and is warm itself, it can quickly flood the engine as it does not need that amount of heat to start. If the operator is troubleshooting the chainsaw at a warm or mild temperature, they should double-check to make sure the choke is not activated. If it has been on, the engine may be flooded, which can be resolved using the steps above.

The fuel has deteriorated and should be replaced.

As with many mechanical devices, the quality and quantity of the fuel used in a chainsaw can impact its operation and functionality. Operators should first check that their chainsaw is properly fueled so the engine can run. Gasoline will start to deteriorate if left unused and sitting, so if the chainsaw hasn’t been started in a while, be sure to check that old fuel is not collecting inside the chainsaw. If it is, the gas tank needs to be cleaned and refilled with fresh gas.

If you find that your chainsaw still won’t start, you may need to bring it to a specialist or invest in a replacement. If you need branches trimmed or a tree removed immediately, you can reach out to a professional who can handle the job for you while you for a diagnosis or research the best chainsaw options.

How to Measure a Chainsaw Bar and Chain
Advertisement

The Best Chainsaw for Cutting Firewood for Your Home