Why Is My Dryer Not Heating? Solved!

Don't let a lengthy dry time get you down: Tend to these six problem zones to remedy what might be slowing down your appliance—and your schedule. 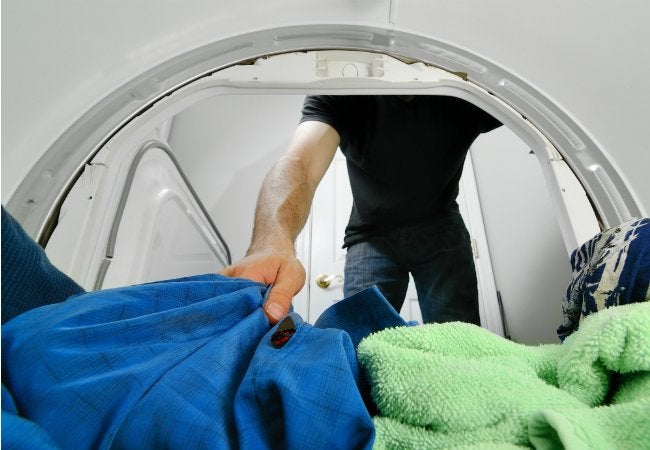 Are you stumped by the fact that your dryer seems to take forever these days? If your clothes dryer needs more time to dry a load now than when you first purchased it, don’t jump to replace the home appliance just yet. There are several causes for a dryer not drying efficiently anymore, many of which you can reverse. First, take a peek at these six possible problem areas that could be messing with your machine.

RELATED: This is How Long Each of Your Major Appliances Should Last

The filter is the first line of defense against fabric lint, dust, and hair. Sure, you’ve heard this before, but you really do need to empty the dryer’s lint filter after every load.

Some types of clothing—socks, especially—shed more than others. But no matter the load, getting into the habit of wiping the filter out after every wash and dry will put you ahead of the game in both routine appliance maintenance and fire prevention.

Indeed, failure to clean the dryer is the leading cause of dryer fires, according to the U.S. Fire Administration.

2. Inspect where the dryer vent exits the house.

When the dryer’s running, there should be a steady, unhindered stream of warm air passing through the vent exit. If you have mesh screening stretched across it, you’d do well to remove the mesh, which can catch lint and obstruct airflow and prevent your clothes from drying completely.

Instead, install a proper louvered door that opens only when the dryer’s running. You can purchase one at your local home center or have it delivered from Amazon.

3. Clean the inner reaches of the vent.

If the lint filter and the exit of the vent are clear, you probably need to clean the inner reaches of the vent. This cleaning job isn’t that big a chore, especially if you use one of the brush kits made for this express purpose (like this one from Amazon).

4. If possible, shorten the exit.

Keep in mind that the exit vent on your dryer should be as straight and as short as possible. If the air exiting the dryer has to be pushed too far or make its way around kinks or sags in the hose, drying times can significantly lengthen.

That’s not only a nuisance, but it’s also a waste of energy (and money). If you can, consider moving your dryer to a position that allows for a shorter hose.

5. Tape all joints in the dryer vent.

Sealing the interior and exterior joints will prevent air leaks as well as keep lint from catching at these locations. (While screws and rivets usually make good fasteners, they’re sure to snag lint if they’re holding together joints in dryer vents—when used, they should be covered.) Do keep in mind that duct tape can and will melt when exposed to heat, which could cause the piece of tape to peel back enough so that it becomes a lint magnet. Heat-resistant aluminum tape, however, won’t falter and is, therefore, better for the job.

An important word of caution: If you’re using one of those exit hoses that look like a Slinky covered with vinyl, replace it. Now. The U.S. Consumer Product Safety Commission recommends choosing an aluminum semi-rigid duct, because a flexible plastic or foil tube can more easily trap lint, and that buildup can lead to overheating.

While problems with exit vents aren’t the only factors that can lead to a dryer not drying well, they’re by far the most common. Scope out these issues before you ring the repair folks, and you might just save yourself the price of an expensive service call.

6. Call a professional to check the power source.

The dryer’s power, whether it’s gas or electric, could be to blame for the lack of heat.

If the gas is off, a gas clothes dryer will not dry the load. Meanwhile, an electric dryer plugs into a 240-volt electric outlet, often with two circuit breakers installed to control power to it. If one flips and the machine only gets a partial voltage of 120 volts, the dryer will spin but not heat up.

Check the circuit breaker to see if anything was tripped, and call in a professional if there seems to be a larger electrical problem at play.

Solved! Why Is My Dryer Squeaking?
Advertisement

How to Make Any Room Into a Laundry Room