What’s Causing That Burning Smell Coming from the Dryer? Solved!

Troubleshoot the ominous odor your dryer is emitting to keep your household safe. 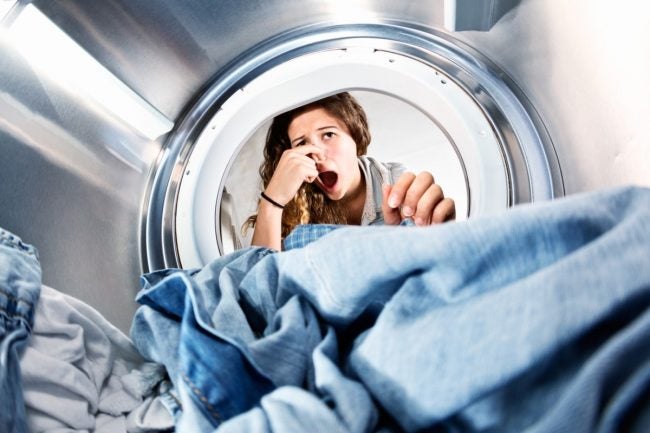 Q: The last time I used my dryer I detected a distinct burning odor. I didn’t see any smoke but definitely smelled something burning. Now I’m afraid to use it, worried it might start a fire. What should I do?

A: You’re right to be concerned and the best course of action is to stop using the dryer until you pinpoint and address what’s causing the burning smell. A dryer that isn’t correctly maintained—or one that was never properly installed—could cause a fire. Read on to figure out why the dryer is making such a stink, how to fix it, and how to stay safe moving forward.

Detergent cannot remove all types of solvents, including gasoline, mineral spirits, and paint thinner, so if you’ve washed clothes stained with these products, the heat from the dryer can release strong odors. What’s more, many types of solvents are flammable, so any items stained with these liquids should be air-dried on an outdoor clothesline, never in the machine.

Allow a brand new dryer a chance to off-gas.

A new dryer is likely to release some odd smells. The dryer’s inside cabinet gets very hot during operation, and the components used in the manufacture of appliances may contain a bit of oil or coatings that will off-gas off during the first several uses. If this is the case, the dryer is safe to use, just open a window and its burning smell should soon subside.

The fine lint that collects in the dryer’s lint trap is highly flammable, which is why you must clean the trap after every load. Even if you’re conscientious about that, some lint may escape around the edges of the trap and settle on the heating element located within the dryer cabinet, giving off a burnt odor during use. To remedy this problem, disconnect your dryer from the power source (unplug or turn off gas valve) and then remove the back panel. Vacuum up any loose lint fragments with a nozzle attachment.

Investigate the vent hose for a blockage.

The ventilation hose that leads from the dryer to the outside of your home (usually through a wall) should be clean and clear at all times for hot air to exhaust freely. A typical lint trap captures about 70 to 80 percent of lint generated during drying, but the remaining airborne lint fibers are drawn out through the vent pipe, a flexible pipe about four inches in diameter that attaches to the back of the dryer. In some cases, the flexible pipe will then attach to a hard metal or PVC pipe of the same diameter at the point where the pipe enters the wall. Other flexible vent pipes, however, run all the way from the dryer to the outdoors.

A blockage in the pipe causes hot air to back up, which can push lint around the sides of the trap and into the dryer cabinet. Check the outside vent cover, usually located outside of the nearest exterior wall, and ensure that the louvers open easily. Look inside the vent pipe for blockages, being extremely careful, because wasps, hornets, and other flying can squeeze through openings in the louvers to build nests—a fairly common problem.

Because lint is highly flammable, follow these precautions to reduce the risk of fire:

Like a blockage, a kinked ventilation hose reduces airflow and can force lint into the dryer cabinet. Some dryers are installed with flexible ventilation hoses all the way from the back of the dryer to the outside, but if yours has kinked or collapsed, you might want to replace the hose with a solid metal vent pipe (usually a job for a pro unless the pipe is fully accessible from an attic or crawlspace). When checking for a kinked hose, examine the vent from both the outside vent opening and also where the hose connects to the back of the dryer.

Investigate for a malfunctioning belt.

Your dryer’s motor turns its drum (where you put the laundry) via a heavy belt, but if the belt is slightly loose (a common occurrence when they wear out), it will slip instead of grabbing tightly. This creates heat and friction, which eventually will cause the belt to melt. If you’ve ever smelled a melting belt on a vacuum cleaner, you’ll recognize the smell of burned rubber immediately. The belt must be replaced—a job for a professional appliance repair person or a DIYer with experience working on small motors—to solve the problem.

Call a pro if the thermostat fails.

Most of today’s dryers have an internal thermostat that will shut the machine off if it gets too hot. Overheating can occur if you’re drying a large load of heavy clothes for an extended period of time. Usually, when the machine cools down, you can continue drying. If the thermostat isn’t working, however, the dryer will continue to run even when the motor is overheated, creating a smell similar to electrical wires burning. If this happens, a professional appliance service technician will need to replace the thermostat and make sure the machine is safe to operate.

Contact a pro if none of the above apply.

Malfunctions in the dryer’s heating element or even faulty wiring in your house could be causing the burning smell. The only way to find out is to have a professional check it out. If the above troubleshooting techniques can’t solve the problem, don’t risk running the dryer while it’s emitting the smell.

Solved! Why Is My Dryer Squeaking?
Advertisement

How Much Does Dryer Vent Cleaning Cost?