One-Touch Automation for Your Home 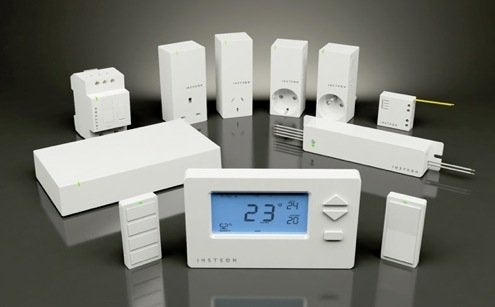 Light switches are a problem in our home. Every single light switch is in the wrong place—or at least it always seems that way to me.

Today’s technology is making my difficulties disappear, however. Remote controls have made light switches throughout our house easy to operate from one single panel by the door. And I can even turn on certain lights from my car, using controls that ordinarily would be used for a garage door opener.

The X-10 Plug-In Mini-Controller from The Home Automation Store lets you command up to eight X-10 compatible receivers.

Remote controls are a practical and affordable way to control your home’s lighting system, as well as thermostats, appliances, home entertainment systems, burglar alarms and even lawn sprinklers.

The simplest systems are based on controllers that plug into A/C power outlets and use your existing home wiring to send signals to modules throughout the house. More sophisticated home automation suites generally incorporate wireless technology and are controlled through a computer interface.

The earliest home automation system actually has been around since the late 1970s, when Radio Shack debuted the first controllers and modules based on X-10 technology, which uses a home’s existing power lines.

Related: 12 Gadgets to Lead Your Home into the Future

X-10 technology still is widely used, because it is relatively inexpensive. Retail prices for controllers typically start at $29.99 and prices for modules start at $12.99.

Power Lines. These systems, commonly called X-10, use your home’s existing electrical wiring and outlets. They can be used to control lighting, appliances, and burglar alarms.

Wireless Radio Frequency (RF) Signals. These systems operate the way a television remote control does, sending wireless radio signals to modules controlling lighting, appliances, burglar alarms and home entertainment systems. Some of the common conventions are the INSTEON system from SmartHome; ZigBee, an open-specification manufacturing system with more than 100 companies providing the technology; and Z-Wave technology, which is offered by about 60 companies. Smarthome’s INSTEON, which uses both power lines and RF signals, is backwards-compatible with X-10 systems. Zigbee and Z-Wave are both based exclusively on RF wireless signals.

Phone Lines and Internet. These systems use existing telephone wiring and internet connectivity to control systems via a desktop, laptop, or smart phone. These generally require a wireless network within the home and a computer interface for programming the system.

Dedicated Home Automation Wiring. Many new homes are being built with dedicated wiring—Category 6 (Cat6) twisted pair cable for data and communications, along with coaxial cabling for home entertainment systems. This is a good option for new construction, allowing wired computer networks throughout the home, but it’s not really a practical alternative for existing homes.

The best way to get started with a home automation system is to purchase an expandable “starter kit” that consists of a basic controller and several modules. Experimenting with lights and appliances will help you figure out how a remote control system will fit into your lifestyle.

Prices for beginning home automation kits typically start at about $99. These are commonly available at national home centers, electronics stores, and from online retailers. And yes, there is an “app” for that!

For more on home automation, consider:

A Beginner’s Guide to Home Automation

Automation for the Smart Home

12 Gadgets to Lead Your Home into the Future