How To: Make Your Own Dishwasher Detergent

Why waste money—or put your family’s health at risk—with store bought brands when you can DIY a safe, efficient cleanser for everything from plates and glassware to pots and pans. 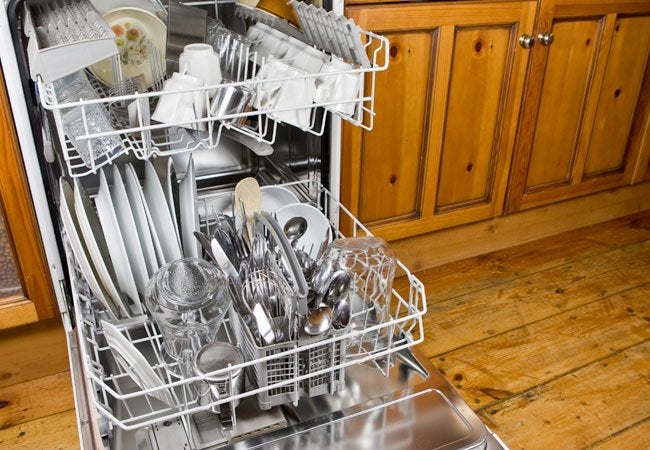 Enter any supermarket and it’s obvious that detergent is big business. Yet while the choices seem endless, today’s consumer is increasingly turning to homemade detergents. This is especially true for parents of young children, due to reports that detergent poisonings have risen more than 20 percent since the advent of the colorful cleaning “pods” that have flooded the market in recent years. (In 2016, poison centers received reports of 10,673 exposures to highly concentrated packets of laundry detergent by children 5 and younger. Symptoms include vomiting, wheezing, and gasping, as well as corneal abrasions from detergent getting into the eyes; this year, one child died after consuming a detergent pod.) While pods are certainly convenient, they’re costly—potentially raising your price-per-load by 50 percent. Depending on your brand of powdered detergents, pods, or combination thereof, you probably spend between $0.13 and $0.40 per load. The non-toxic, hardworking homemade dishwasher detergent described here runs about two pennies—that’s right, $0.02—per load. So whether you want to save money, protect your family and the environment, or simply know exactly what you’re cleaning with, you’ll want to give it a try today!

STEP 1
Make washing soda (sodium carbonate) from baking soda (sodium bicarbonate). Preheat oven to 400 degrees Fahrenheit. Pour about half an inch of baking soda on the bottom of the baking dish, and bake for one hour, stirring once or twice, until it changes from silky and powdery to more grainy in texture. Let cool and store in an airtight jar, labeled “washing soda.”

STEP 2
Combine one cup of washing soda with the remaining ingredients (1 cup Borax, ½ cup kosher salt, ½ cup unsweetened lemonade mix, and up to 10 drops of essential oil) in an airtight container, such as a large mason jar. Label it “dishwasher detergent.”

STEP 3
Use one tablespoon of homemade dishwasher detergent per load of dishes, proceeding with your usual washing method. If you wash at cooler temperatures or have “hard water” in your region, you may need a bit more per load. Experiment with quantities, increasing by a tablespoon or two. Do not add liquid dish detergent to this mix, which could damage your appliance.

• If you haven’t the time or inclination to make your own washing soda, purchase it ready-made online or at grocery or hardware stores. However, don’t use plain baking soda in your dishwasher detergent recipe—it won’t do the trick!

• Don’t let the chemical-sounding name bother you! Borax—scientifically called “sodium tetraborate” or “sodium borate”—is a naturally occurring mineral, a salt product derived from boric acid. While not ideally ingestible, it has the same safety rating (“1”) as salt and baking soda. So if your child managed to consume some homemade dishwasher detergent, mild nausea might ensue. Borax may also irritate the eyes.

• If you have “hard water,” increase the kosher salt from half to a full cup. This will reduce build-up that might otherwise cause pesky spots on glassware.

How To: Make Your Own Drain Cleaner
Advertisement