3 Fixes for a Dull Knife

If your knife smooshes your tomato instead of slicing it, your cutlery clearly isn't cutting it. Read on to learn how to fix up a blunt blade and keep your knives sharp—and yourself safe. 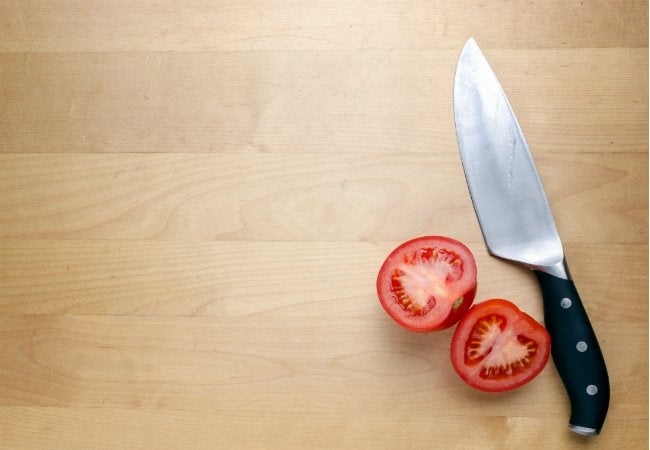 No matter how you slice it, a dull knife just won’t cut it in the kitchen. Working with a blunt blade both slows down your food prep and increases the risk of injury as you try to overcompensate with each slice—a practice that’s both frustrating and dangerous. But, before you can sharpen a kitchen knife, you first need to determine why it’s dull. Typically, the blade either has a bent edge or is blunt from use, and each issue calls for a different solution. Fortunately, for every cutlery conundrum, there’s a “cutting-edge” solution. We’ve rounded up three smart fixes that will keep your blades sharp and your edges straight.

Carve It In Stone
When dealing with a blade worn down from months of meal prep, turn to the preferred tool of professional chefs: the whetstone. Also called a sharpening stone, this long, rectangular block is made from composite stone with a coarse grit on one side and a fine grit on the other. As the knife rubs against the stone, bits of the metal blade are ground off to produce a new, sharper edge.

To use a whetstone, first soak the block in water for 15 minutes, then place it on a towel with the coarse side up. Hold the knife at a 20-degree angle to the whetstone and slide it across, pulling the blade toward you, so that the blade’s tip through its heel (the base of the knife) come into contact with the stone. Continue for 12 strokes on each side of the blade, then flip the stone over. Repeat the same process on the fine-grit side. While this hands-on sharpening technique takes practice to perfect, the good news is that your knives need to be sharpened only a few times a year.

Electric sharpeners offer an easier, automatic process using the same principles, but they also remove a tremendous amount of material from the blade and ultimately shorten the lives of your knives. If you own an expensive knife set, electric sharpeners could cost you more in the long run. That’s why the whetstone is the way to go: This manual method allows complete control over the amount of metal removed.

Straighten Up for Clean Cuts
Unlike a whetstone, a honing steel should be used regularly to straighten, rather than sharpen, your knives. Bent edges translate to dull blades, which will cause problems on the cutting board. The ridges along the length of a honing steel work to straighten the edge of a knife by gently pushing it back into place.

To hone a knife, take the cutting utensil in your dominant hand and hold the steel’s handle in the other. For maximum control, place the tip of the steel on a cutting board, and position the heel of the knife against the top of the steel with the blade facing downward at a 20-degree angle. Then draw the knife down the rod in an arcing motion so that, by the end of the arc, all of the blade—from the heel to the tip—makes contact with the steel. After the first pass, repeat the motion on the other side of the steel (again holding the blade at a 20-degree angle), so that you’ve honed both sides of the blade. Continue alternating the downward, arcing motion until you’ve completed 10 strokes on each side. (You must do an equal number of strokes on each side to ensure that the edge aligns.) Once honed, your knife’s edge will be in its proper position, resulting in easier slicing and dicing.

Settle for Sandpaper
In a pinch, sandpaper can be used to shave a new blade, offering an inexpensive homemade alternative to a sharpening stone. Just tape a sheet of fine-grit sandpaper to the edges of a cutting board. Firmly hold the knife by the handle at a 20-degree angle to the board and lightly press down on the center of the blade. Then, slide the edge of the knife across the sandpaper as if shaving a thin layer. After 10 strokes, turn the knife over and repeat on the other side. When you’re done, replace the fine-grit sandpaper with a sheet of extra-fine sandpaper, and repeat the process. Although this hack method isn’t ideal, its results are still better than your otherwise dull blades.

The Best Knife Sharpeners of 2022