The Makita Angle Grinder is Durable, But Does it Perform?

If you’re in the market for a cordless angle grinder for welding, metalworking, and wood carving projects, check out our hands-on review of this Makita model. 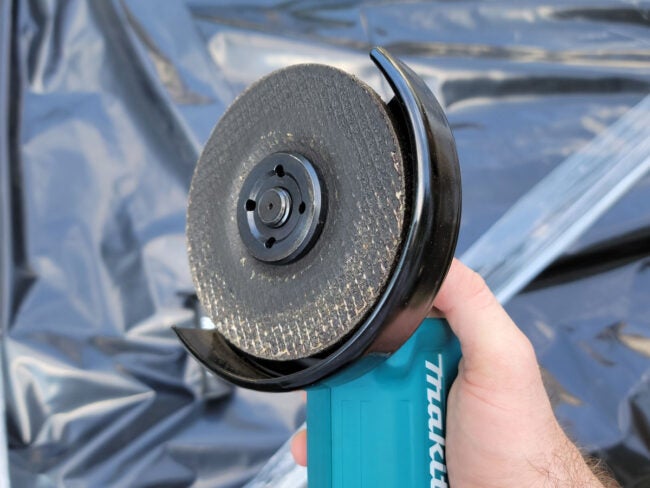 For a long time, angle grinders—tools typically used for cutting, sharpening, cleaning, and polishing metal—were used only by pro metal fabricators, mechanics, and automotive body repair technicians. But with more DIYers tackling at-home metalworking, welding, woodcarving, and even grout removal, manufacturers took notice. Now, the best angle grinders are more convenient and accessible than ever. Of course, that means there are a lot of options on the market—and that can cause confusion.

I performed hands-on testing with this Makita angle grinder to share with anyone shopping for one of these tools. My review provides real-life feedback about its design, capabilities, and other important information about its features. What you learn from this review might surprise you as much as I was surprised while testing the tool. Keep reading for help deciding if this is the right cordless angle grinder for you.

Makita Angle Grinder: At a Glance

Get the Makita Angle Grinder at:

What Is the Makita Angle Grinder?

The Makita angle grinder is a cordless angle grinder that runs on the brand’s 18-volt lithium-ion battery system. It has a brushless motor, requiring less maintenance than a brushed motor while also increasing its power and battery life. The motor produces up to 8,500 rpm, and it has an automatic speed control function that adjusts the speed and torque during grinding and cutting conditions.

The grinder accepts both a 4.5- or a 5-inch grinding wheel and disc. To combat the kickback caused by a larger grinding wheel, it features built-in slow-start technology to ramp up the speed slowly.

To protect the user’s hands from the spinning disc and sparks, the Makita angle grinder comes with a two-piece handguard. It also has a thumb-activated switch that locks into the “on” position for extended use. And to help users maintain a solid grip, there’s a screw-in handle that attaches on the left or the right.

This tool can serve several purposes, including cutting, grinding, sharpening, carving, and more. In some cases, it may take the place of a bench grinder or a rotary tool as well.

Is the Makita Angle Grinder Easy to Set Up?

Setup is unfortunately one of the main downsides to the Makita angle grinder. Unlike some models, this grinder doesn’t come with the removable guard already attached; you’ll need to attach it yourself. While this is fairly simple with other angle grinders, I found the process to be a bit tricky with the Makita.

This model has a two-piece handguard. There’s a traditional metal guard used for cutting and grinding, and then a plastic shroud-like guard that attaches to the metal guard. The shroud covers half of the grinding wheel on all sides. While the tool is undoubtedly safer with the plastic guard in place, it makes grinding a lot more difficult.

And in terms of setup, the guard was also a bit finicky to attach and remove. There is a spring-loaded metal clip on one side and, in my experience, it doesn’t operate like it should. It clips on while not being fully seated, which means that the plastic guard could potentially fall off while grinding. Then, with the plastic guard fully seated, it didn’t snap into place like I expected. I removed the plastic guard and proceeded using the tool with the metal one.

Beyond the guard, the tool’s setup took mere seconds. It comes with a spanner for removing the nut that holds the discs in place, as well as a spindle lock button to prevent the disc from spinning while loosening or tightening.

Is the Makita Angle Grinder Easy to Use?

Yes, I found the Makita angle grinder to be very easy to use. Many angle grinders feature small thumb-activated switches, but the Makita’s is large and easy to manipulate (even with gloved hands). This made starting and stopping the grinder to check my work a breeze. For quick grinds, I would simply apply pressure to the switch. For long grinds or cuts, I’d lock the switch into the “on” position and get to work.

Grinding wheels are quite a bit heavier than cutting discs, so I expected some kickback when I started the grinder with a grinding wheel installed. Fortunately, the Makita’s slow-start technology made starting it up with a grinding wheel feel no different than a cutting wheel. There wasn’t any noticeable jump or jolt, which made maintaining my desired grip and lining up cuts quite easy.

In practical use, the metal handguard worked just as it should. I was able to loosen and reposition it as necessary, and it kept most sparks and debris from making me uncomfortable. I didn’t even attempt to use the plastic guard for reasons stated above.

Is the Makita Angle Grinder Comfortable to Use?

This was the aspect of testing the Makita angle grinder that pleasantly surprised me the most. Compared to almost every other model, the Makita’s vibration and “jumpiness” were the least noticeable. It was as smooth as a finely tuned machine should be.

I believe much of the vibration control comes from the rubber over-molded grips and the better-than-most rubber padding on the handle. This really does matter, as even a small metalworking project requires quite a bit of time spent grinding. Poorly designed angle grinders without vibration control can wear down the user’s hands. With the Makita, I was able to continue grinding and cutting, and then move onto welding without tired, cramped hands.

How Did the Makita Angle Grinder Perform?

When testing the Makita, I compared it to several other angle grinders with the same grinding wheels and cutting discs attached. Not only did this give me a solid grasp of how the Makita performs, it also showed how it stacks up against other cordless models.

Of cordless models, the Makita had the lowest top speed, but it was also the only model that could handle 5-inch wheels. And because the Makita has an automatic speed and torque control, I didn’t notice it slowing down much, even buried in my large, ugly amateur welds. (Full disclosure: It’s been a few years since I’ve welded.) So I would say that under practical application, the Makita felt just as fast and powerful as other high-speed cordless angle grinders.

The Makita’s build quality was also on full display. The spindle-lock worked flawlessly, and the spanner slipped into the retaining nut very easily. The screw-in handle felt sturdy and stayed secure during use, and the entire grinder felt like a quality tool should while in hand.

Is the Makita Angle Grinder Worth the Money?

As far as the value the Makita angle grinder offers, there are two sides to the coin.

Yes, the tool itself is slightly more expensive than some other cordless grinders, but it’s one of the only models designed to handle 5-inch discs. A larger disc requires a burlier grinder with sturdy components, and that will cost extra. Also, the slow-start technology and ergonomics are spot-on, and that takes research, which translates to a higher price. For the money, you’re getting a lot of cordless grinder.

The other side of the coin is less about value and more about awareness: The Makita angle grinder is typically sold as “tool only,” meaning it does not come with a battery and a charger included. So if you aren’t already invested in the 18-volt lineup, that will mean two additional purchases. That said, even with the extra money spent on a charger and a battery, there is still plenty of value in the Makita angle grinder if you will regularly use this tool.

Is the Makita Angle Grinder Right for You?

The purpose of this review is to help you decide if this is the right tool for you. While the answer is certainly relative, there are certain types of users who should definitely consider purchasing the Makita angle grinder.

Crafts and tradespeople who work on-site where power isn’t always readily available should give some serious thought to this angle grinder. With a 4.0aH battery (which is what I had on hand), the Makita lasted a long time, even when grinding down heavy welds. There are other cordless models with plenty of speed and power, but very few can handle a 5-inch disc.

Finally, DIYers who worry about a grinder being too much of a tool to handle are ideal candidates for the Makita angle grinder. Sure, it’s a powerful machine, but the slow-start and the vibration control features make wielding it a breeze. Compared to other models, the Makita’s ergonomics and handling are spot-on.

Where to Buy the Makita Angle Grinder

Get the Makita Angle Grinder at:

The Best Cordless Angle Grinders of 2022

Working With These Power Tools? You Need Hearing Protection, Pronto

The Best Woodworking Tools of 2022