The unintended strain on the power grid by smart thermostats could spell trouble if users aren’t educated on best practices. 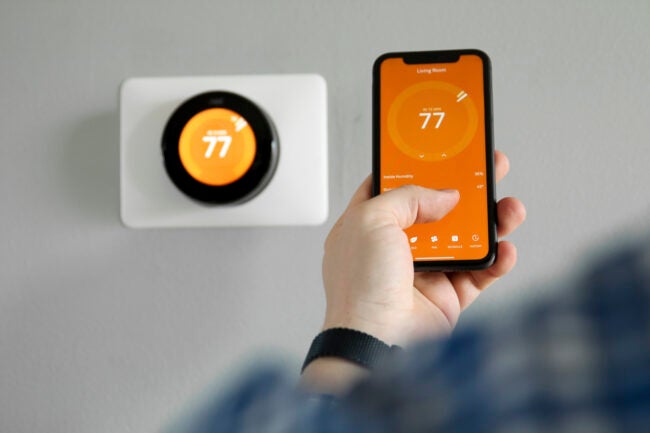 From reducing energy usage and lowering utility bills to making it possible for users to adjust a home’s temperature from a remote location using their cell phone, smart thermostats offer a range of benefits to consumers. Users may enjoy creating heating and cooling schedules to keep their home at their preferred temperature for different times of the day, but there is a hidden cost that comes down to user error.

Cornell researchers discovered that these convenient systems can place too much strain on the power grid because of higher peak energy demands and a lack of customization by users.

RELATED: Solved! Why Is My Electric Bill So High?

40 percent of homes in the U.S. have smart thermostats.

Default settings increase demand on the grid at peak times.

Because so many users keep the default factory settings for their smart thermostat, all of these devices are set to warm up a cold house in the winter at the same time—typically around 6:00 am. Even users who customize their settings often choose similar times to have their thermostats kick on the heater during a cold winter morning. This synchronized demand can place excessive stress on the energy grid, eventually contributing to power outages or rolling blackouts, particularly in more vulnerable areas.

RELATED: How Much Does a Heat Pump Cost?

Solar can’t pick up the slack on dark winter mornings.

During the colder winter months, in particular, this load synchronization often occurs during the early morning hours, when it is still dark outside. This means that renewable resources, such as solar, are unable to help offset the load on the power grid. If electric companies are unable to meet the demand for electricity during the peak times–and can’t rely on renewable resources–they have to turn to fossil-fuel generators to keep up with the higher demands. Smart thermostats, intended to regulate energy usage, can end up dimming a community’s efforts to rely more heavily on renewable energy sources.

RELATED: 15 Ways to Stay Warm Without Turning on the Heat

Electric heat will increase the demand on the power grid.

While the synchronization of smart thermostats is already beginning to impact the power grid, the effects will be even greater in the future. As of 2018, only 37 percent of homes in the United States used electric heat. However, with growing pushes to reduce fossil fuel consumption, more and more homes are likely to convert to electric heat in the coming years. If no changes are made, this could place even more stress on an already-strained electric grid.

With the increased stress, more power outages or rolling blackouts could occur. To supplement and keep up with the demand during peak usage times, electric utility companies will need to resort to fossil fuels. This could potentially cancel out the reduction of greenhouse gasses that will occur from more homes switching to electric heating.

RELATED: 7 Cool Inventions That Will Help You Save Money on Your Heating Bill

Cornell researchers Lee and Zhang believe that there are a few things that can be done to lessen the load on the electric grid during these peak usage times. Educating consumers on how to program and use their smart thermostats is one part of the solution. This will help prevent the onslaught on the grid caused by all the consumers who stick with the thermostat’s default settings. Beyond this, finding a way to stagger the morning ramp-up times even further will also help, ensuring that such a large percentage of homes aren’t demanding energy at the same time.

However, according to Lee and Zhang, to really prevent the increased strain on the power grid, something will need to be done to make smart thermostats even smarter.