What to Expect When You Hear the Words “Summer Kitchen”

Learn about these centuries-old adjuncts to our ancestors’ homes and how those that remain are being used today. 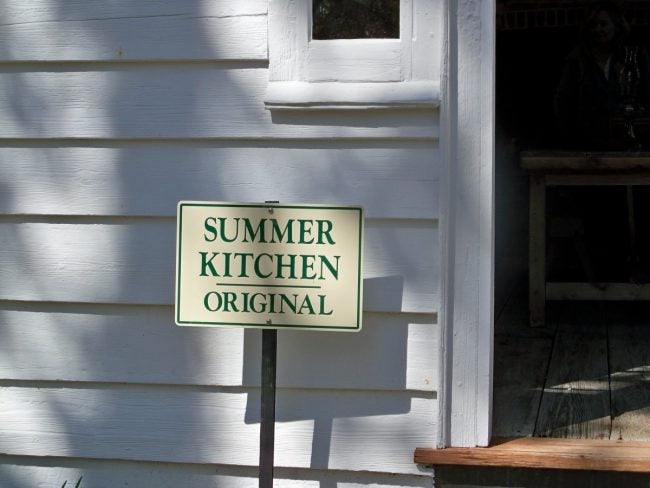 If you’re house hunting and come across the term “summer kitchen” in a real estate listing, you’re in for a treat. If, that is, the mention refers to one of the few authentic summer kitchens that still exist, restored to serve as reminders of how our forebears lived a century or so ago. These days, however, “summer kitchen” may be misused to describe a modern outdoor patio kitchen where folks cook and entertain in nice weather. Keep reading to better understand what a real summer kitchen is, where to find one, and how to make use of this charming historic (and pricey!) feature.

The late 18th century and early 19th century saw the rise of the summer kitchen.

Outdoor structures resembling one- or two-story barns were constructed next to the houses of wealthy landowners, many of whom also owned slaves. Outfitted with a large fireplaces and stone bake oven, these early summer kitchens, located mostly in New England, were designed to be used by slaves or servants for cooking the big meals necessary to feed all the people living on the property. Like separate servant or slave quarters, summer kitchens found on estates and plantations served to keep the cooks and their helpers separate from the main house while they prepared meals.

Within a few decades, smaller summer kitchens began to appear beside the homes of less-wealthy property owners, outfitted with similar cooking amenities on a reduced scale. These one- or one-and-a-half-story structures were common in New England, upstate New York, and the mid-Atlantic region. In the early 1800s, pioneers brought the idea with them to the Midwest where it caught on with large farm families. These smaller summer kitchens remained common throughout much of the 19th century. Canning foods had become popular, and womenfolk would spend weeks putting up the harvest from extensive gardens and orchards to feed their families during the winter and sell to local stores.

The single main reason for building a small summer kitchen was to keep the main house cool by preparing meals elsewhere.

At this time, there was no air conditioning, and cooking was done exclusively on wood-burning stoves and fireplace hearths, both of which radiated intense heat. Keeping the heat, the smoky smells, and the risk of fire out of the main house made good sense. When winter arrived and the canning season was over, most of the daily cooking resumed in the main house on a cast-iron woodstove.

Large summer kitchens built on sizeable plantations and estates were often made from timbers or stones to match the style of the main house, and some featured second-story sleeping quarters for slaves or servants. These kitchens also provided extra room for other activities and chores, such as laundry and sewing, and it wasn’t unusual for them to feature 1,200 square feet or more on the main floor. Many had dirt floors and a few included excavated root cellars for housing root vegetables and canned foods over the winter. The telltale sign of a structure being a summer kitchen was one or more large chimneys rising from the roof.

Smaller summer kitchens of the average homeowner were much more modest, and while some were built with quality materials, such as stones or timbers, many were constructed from inferior wood or rough-cut logs, especially the ones built in the Midwest, where better quality materials were not readily available or affordable.

As slave ownership in New England dwindled during the early 19th Century, so did the appeal of large summer kitchens.

Some were converted into stables or living quarters while others fell into disrepair and were eventually torn down. Smaller summer kitchens remained in vogue for another hundred years or so, their final decline coming with the advent of gas and electric stoves around the time the Great Depression ended. The new stoves radiated less heat and didn’t create clouds of billowing smoke. In addition, indoor running water was newly being installed, making it more convenient to do most of the cooking in the main house kitchen.

The majority of historic summer kitchens are gone, having fallen victim to the ravages of Mother Nature, but a few thousand have been restored.

Properties with well-kept summer kitchens are in high demand and will often bring top dollar from buyers seeking historic homes. Historic homes with restored original summer kitchens on the property can cost anywhere from five percent to 10 percent more than similar homes without them, depending on whether the home is on the National Register of Historic Places (more valuable), as well as the design and size of the kitchen. Most surviving summer kitchens are located in New England, although you may find one here and there adjacent to a Midwest farmhouse. Those few homeowners lucky enough to have a restored summer kitchen on their property will likely have no trouble selling their home.

A summer kitchen can be given new purpose today.

Like properties with other historic outbuildings, such as carriage houses, blacksmith buildings, and tenant homes (small structures with boarding quarters), houses with restored summer kitchens are often used for entertaining and may be rented out for special events, such as weddings. Few are used for cooking anymore, but if those that are have usually been retrofitted with modern appliances and flooring installed over original dirt floors. Some homeowners have opted to turn the structure into a private art studio, gallery, library, or guest house.

14 Mansions You Can Rent Right Now—for Less Than You Think!

These are the Most Popular House Styles in America Right Now