Tick vs. Bed Bug: How to Tell the Difference Between These Notorious Pests

In the battle of tick versus bed bug, there is no winner, but one definite loser: you. Here’s what you need to know about these two blood-sucking pests. 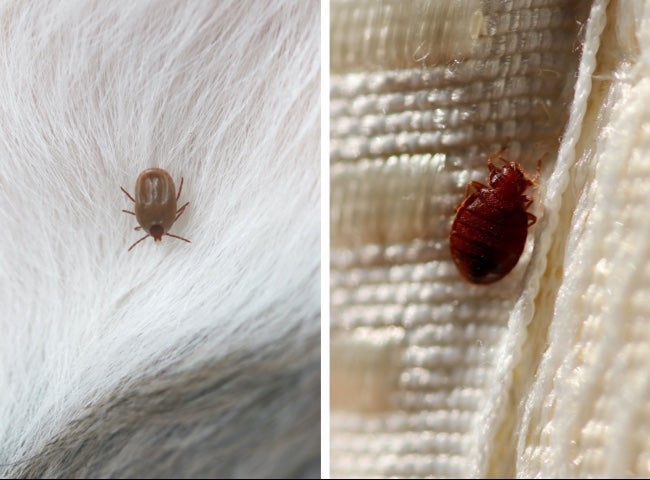 In the case of ticks and bed bugs, there is one thing they share in common—causing disgust. Just the thought of either of these blood-sucking pests is enough to make your skin crawl. But the similarities mostly end there. When it comes to tick vs. bed bug, there are several significant differences between these two unpleasant creatures. If you’ve ever wondered how to tell them apart or even if there are any real differences between them, read on. While you’re unlikely to ever see an actual battle between a tick and a bed bug, it’s worth knowing how to distinguish between—and most importantly, avoid—these pesky parasites.

Ticks have eight legs, while bed bugs have six legs.

While you might call every creepy-crawler a bug, the term is properly only used for insects that feed by sucking and have specialized mouthparts to do so. That includes bed bugs (whose scientific name is Cimex lectularius) along with aphids, leafhoppers, cicadas, and tens of thousands of other insect species, most of which feed off plant juices. As insects, bed bugs have six legs, arranged in three pairs on their thorax, which is their mid-body section.

Ticks, on the other hand, are not insects at all, but are actually arachnids. That’s the same class as spiders, scorpions, and mites. All arachnids have eight legs arranged in four pairs that connect to the cephalothorax, which is basically the head and chest fused together. There are many species and families of ticks, but the ones of concern mostly belong to the family Ixodidae, or hard tick.

Ticks prefer the outdoors, while bed bugs like to hide inside.

Neither of these pests fly or jump; both rely on their host coming close enough for the bed bug or tick to simply crawl onto them. As the name suggests, bed bugs like to spend their time waiting in beds or other soft furniture for an unwitting host to arrive. They can also survive in carpet; although not as ideal for crawling onto a host, carpets are a good spot for laying eggs. And while you’ll most often pick up bed bugs in an infested hotel, they are more than happy to travel home with you inside your luggage.

Ticks, on the other hand, prefer to hide in tall grass, piles of dropped leaves, or other outdoor wooded areas where they wait for a warm-blooded animal to wander near enough so they can climb aboard them and begin to feed. They do not easily reproduce or set up an infestation inside your home.

RELATED: Solved! What to Do When You Find Ticks in the House

Ticks are major spreaders of disease, but bed bugs are not.

While bed bugs can carry many disease-causing pathogens, there’s no known evidence of bed bugs actually transmitting those pathogens to human hosts. However, the bites of bed bugs are intensely itchy, and scratching at them can lead to secondary bacterial infections.

Ticks, on the other hand, carry many serious pathogens, both viral and bacterial, which they can (and do) transmit to their hosts through their bites. Lyme disease is by far the most common of these illnesses, particularly in the upper Midwest and the northeastern states. Other tick-borne diseases include tularemia, anaplasmosis, Rocky Mountain spotted fever, and ehrlichiosis.

When it comes to ticks vs bed bugs, there are many differences between the two, but there is one thing they share in common: both require blood as their primary food source. However, while bed bugs much prefer the blood of humans, ticks generally feed on other warm-blooded animals. Still, both of these itch-inducing pests are more than willing to feed on blood from other supplies if their preferred host is not readily available. Bed bugs are known to bite dogs, cats, and other mammals for a quick meal, while ticks will bite humans if they are unable to gain access to their favored hosts, which depending on species, could be deer, dogs, rodents, or even birds.

Bed bugs are quite a bit larger than ticks.

At first glance, ticks and bed bugs are similar in appearance; both are oval-shaped, without wings, and have fairly flat bodies. However, there are differences that make it easy to tell them apart. Bed bugs are usually reddish-brown, while ticks often have lighter bodies and darker legs with stripes. The bodies of ticks swell up considerably after a good meal. While bed bugs also become engorged with blood, they don’t swell up as noticeably. Whereas both pests are small, bed bugs are typically quite a bit larger than ticks. Prior to feeding, most common species of hard ticks are roughly the size of a sesame seed—around 4 millimeters long—while an unfed bed bug is around the size of an apple seed, roughly 8 millimeters in length.

While the aftermath of a tick or bed bug bite is much the same, resulting in an itchy, inflamed bump on your skin, they have different biting processes and preferences. A tick will latch onto your body and bury its head underneath your skin to feed. While they can bite anywhere, they generally prefer warm, moist areas of the body, such as the groin or armpit. Once in place, a tick might remain for several days, drinking blood until it has had its fill. At that point, the tick will disengage and drop off.

Bed bugs, on the other hand, remain on the surface of your skin while feasting. They gain access to blood by penetrating your skin with their tube-like mouths. Once finished eating, they either drop off, or, more frequently, move to another spot and bite again. Bed bugs will bite wherever your skin is exposed. Common spots include the ankles, chest, arms, hands, neck, and even the face of their hosts.

Bed bugs bite at night, whereas ticks are diurnal in most of the cases.

Since their preferred living quarters are in your bed, bed bugs do most of their feeding at night while you are sleeping. But while bed bugs are mostly nocturnal, they are more than willing to feast during the day if they are in fierce competition for food due to a large infestation or because you work a night shift and are only available for biting during the daytime. And although bed bugs prefer the cover of darkness, it isn’t necessarily true that leaving a light on will discourage them entirely. Bed bugs are a year-round nuisance, but are most active during the warmer months.

On the other hand, most hard ticks are diurnal, meaning they prefer to latch onto a host during the daytime. Some species of ticks like to find a host during the cooler, more humid morning or evening hours, but most are more active during the warmer, dryer afternoon hours. And, as a general rule, while ticks can be out and about any time of year when the temperature is above freezing, they are most prevalent in the warmer months of summer through fall.

Solved! What Are the Small, Tiny Brown Bugs in My House?

Solved! How Do You Get Bed Bugs In Your Home?

11 Pests That Pose a Threat to Your Pets