How to Turn Snow Into Useful Water Reserves

Prepare for a drought and save money by harvesting wintertime snow to use for household chores in drier months. 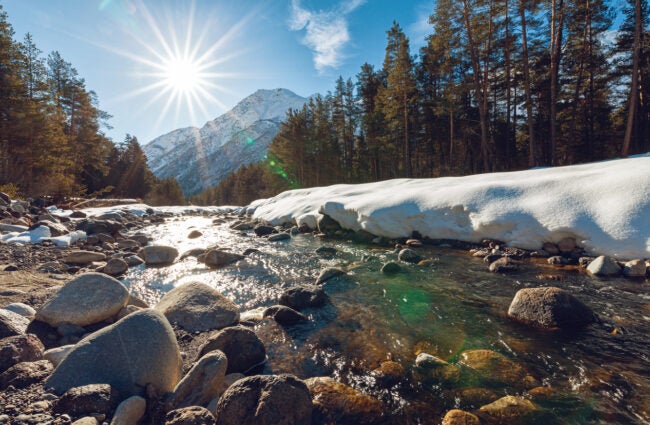 Millions of people in the United States depend on the melting of mountain snowpack for hydropower, irrigation, and drinking water. The extreme drought affecting the southwestern U.S. is not only reducing rainfall but also causing snowpack to disappear throughout the region. According to the Environmental Protection Agency, from 1955 to 2022 snowpack declined by 23 percent, on average. Snowpack is critical for the water cycle and impacts water resources. As well, higher temperatures cause snow to melt earlier, which affects the timing and availability of water. Changes in snowpack have far-reaching effects, with consequences for agriculture, wildlife, vegetation, recreation, and tourism.

The looming water crisis has spurred homeowners to look for ways to adapt and prepare. In this quest to preserve a limited resource, snow harvesting—capturing snow during the winter for later use—is a potentially valuable strategy. With people constantly on the lookout for ways to get through the harsh winter more easily, snow harvesting provides the opportunity to put the hassle of snow removal to a rewarding use that helps homeowners save money and get ready for drier times ahead.

Similar to rainwater harvesting, snow harvesting involves capturing and storing runoff from rooftops, sidewalks, or other impermeable surfaces as snow melts. The key to successful snow harvesting is to manage the runoff so it can be used later when most needed. The process saves money, conserves water, and preserves a valuable resource that would otherwise end up in storm drains. Because people who harvest snow use less municipal water, they also use up less of the energy required to treat and deliver that water, thereby reducing their carbon footprint. Melted snow is particularly beneficial to gardeners because it is a fresh, convenient water source that also contains nitric oxide, a natural fertilizer.

Ways to Collect Snow at Your Home

Harvesting snow can be easily done on a small scale using sloped roofs, rain gutters, and downspouts. Other supplies include a filter to capture leaves and other debris, a covered container to hold the melted snow, and a delivery system to transport the water from the container to where it is needed, like a pail, hand or mechanical pump, or gravity-fed hose.

Another option is to collect snow from a driveway or other undisturbed location on the property and save it in containers. This is commonly referred to as snow farming. While often performed on a large scale at ski resorts and by local governments, snow farming is also a good way for homeowners to store snow for later use. Essentially, snow farming involves moving snow around using anything from a shovel to something more advanced like a snow blower, snowplow, or snow groomer. The snow is transferred to areas where it can be stored and allowed to melt slowly. When properly covered, these snow reserves can last for an extended period of time.

RELATED: The 14 Best Tools for Conquering Ice and Snow

There are several ways to store melted snow. The most basic way is to save it in plastic jugs that can then be easily used to water a garden or houseplants. A rain barrel is probably the most common way to store melted snow and rainwater. It should be securely covered to keep out debris, deter mosquitoes and other bugs, and prevent animals or even young children from falling in. The best rain barrels hold 50 to 55 gallons and have a mesh screen to keep debris out, a spigot that attaches to a garden hose, and a diverter or overflow hose to prevent water from gushing out and creating a puddle. Before storing snow or melted snow in a rain barrel, check the manufacturer’s instructions. Frozen water expands, so ice can damage rain barrels and attached hoses. Because of this, it may be necessary to move a rain barrel to a location where it will not be subjected to freezing temperatures. Alternatively, the water can also be stored in a garden pond or cistern, which can serve as a backup water supply.

How Long Can Melted Snow Be Stored?

It may be hard to imagine water going bad, but if a storage unit is not sealed properly, the water can become contaminated within 1 week. When left exposed, stagnant water can become a breeding ground for bacteria and algae and be affected by light, pests, and air pollution. Once contaminated, the stored water can actually become toxic to plants. For extended storage, it’s best to use one of the containers mentioned above. It is also important to remember that icy water can harm some indoor plants, so be sure to warm the water to room temperature before using it.

Although rain and snow are produced by nature, by the time that precipitation ends up in our hands, it can contain bacteria, parasites, viruses, and harmful chemicals. Dust, smoke, particles in the air, and animal feces can all contaminate the water. Plus, roofing, gutters, pipes, and other building materials can leach asbestos, lead, and copper into the water. For these reasons, the Centers for Disease Control and Prevention (CDC) warns that rainwater and water from melted snow can cause illness and are not safe to drink.

It is possible to treat melted snow to make it safe for consumption, but doing so can be costly. The water should first be tested for harmful germs, chemicals, or toxins. According to the CDC, treatment options include filtration, chemical disinfection, or boiling, but no one treatment takes care of everything: “Filtration can remove some germs and chemicals. Treating water with chlorine or iodine kills some germs but does not remove chemicals or toxins. Boiling the water will kill germs but will not remove chemicals.” Given the effort and expense required to treat this water, it’s wisest to reserve harvested snowmelt for use around the house and garden.

RELATED: 8 Clever Hacks for How to Shovel Snow

Safest Uses for Melted Snow Around the House

The CDC recommends that rainwater and melted snow be used only for watering plants that are not consumed or washing items not used for cooking or eating. The collected water can also be used for laundry; to wash cars, windows, or buildings; to clean outdoor furniture; flush or wash toilets; and mop the floor. Stored snowmelt should never be used for drinking, cooking, brushing teeth, or rinsing produce.

10 Fun Ways to Turn Your Backyard into a Water Park

7 Smart Ways to Save Water in the Yard

The Best Ways to Improve Your Home's Value in 2022

10 Ways to Decorate with Houseplants for a Pop of Personality

10 Things No One Tells You About Tiny Houses

15 Things You Don't Want in Your House During the Pandemic