What Does Poison Sumac Look Like? Everything You Need To Know About Identifying Poison Sumac

If you’re not sure what poison sumac looks like compared to its well-known relatives, poison ivy and poison oak, here’s how you can identify it. 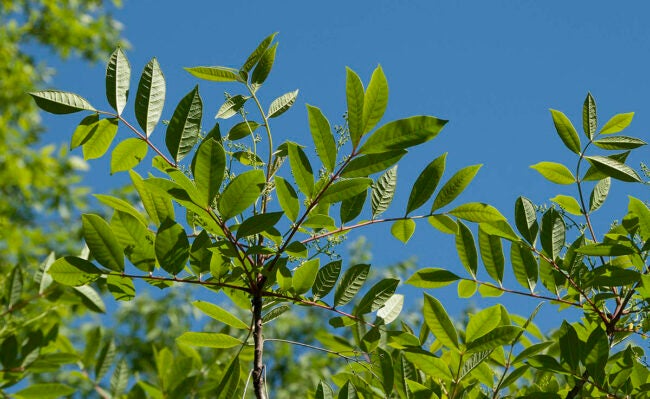 Q: Last year, I moved into a new home on wetlands. I just started clearing out parts of the yard and found what may be poisonous plants. What does poison sumac look like so I can identify and address it?

A: Poison sumac isn’t a threat to all backyards, but it does grow well in wet soil because it is a marsh plant. If a yard in the eastern, midwest, or southern United States has high water retention or is near a body of water, poison sumac might be growing.

Identifying poison sumac is crucial because it can trigger painful allergic reactions—rashes or worse. For some, these reactions are severe. Because physical symptoms aren’t immediate, learning what poison sumac looks like can help a homeowner know which areas of their yard require special precautions and treatment.

Poison sumac in your garden?
A pro can remove it for you. Get free, no-commitment estimates from lawn care specialists near you.
Find a Pro

Poison sumac has smooth leaf edges with five to 13 leaves per stem.

Many are familiar with “Leaves of three, let it be” to steer clear of poison ivy and poison oak. Because of its feather-shaped leaves, poison sumac may not be easily identified as a threat. Some non-poisonous relatives of poison sumac are used in landscaping.

Poison sumac has compound leaves, which means the plant’s stem has buds of thinner stalks with tiny “leaflets.” Poison sumac’s leaves are made of two to six pairs of leaflets, arranged parallel to each other with an unpaired leaflet at the tip. Each leaf (made up of five to 13 leaflets) can be up to 12 inches long.

All poison sumac leaflets are oval-shaped with smooth edges and pointed tips. They’re a hairless light to dark green in spring and summer, with a noticeable line down the center and fainter veins extending toward the edges.

Don't leave poison sumac unchecked
A pro can remove it for you. Get free, no-commitment estimates from lawn care specialists near you.
Find a Pro

Poison sumac is typically described as a shrub, but it can also grow to tree heights: 20 feet tall or higher. A primary characteristic that distinguishes poison sumac from other woody plants is the red to reddish-brown stems that hold its leaves. They are often bold against the spring and summer leaves of the plant. Non-poisonous relatives of poison sumac do not have red stems.

The red stems of poison sumac are thin and grow upward, fanning out from the base of the plant. As the stems age, their color dulls, and they look similar to the brown-gray bark around the main stem of the shrub.

Because poison sumac’s leaf stems are wide-reaching, they’re a common point of contact for people and pets. The larger the plant gets, the more likely its stems will begin to droop and hang, making an accidental brush-up more likely.

Poison sumac produces berries in the spring that last until the end of summer.

In addition to leaves, poison sumac stems have off-shoots with clusters of tiny light yellow flowers that turn into berries when the temperature warms. These berries are yellow-green to green (or even slightly gray) during the summer and mature into cream-colored berries in the fall. Non-poisonous sumac, in contrast, has red berries that grow in an upright, conical shape.

Poison sumac berries are toxic for humans to ingest, but they aren’t harmful to many birds and small mammals. Many use them as a food source, especially when vegetation becomes sparse in cooler weather. If a person notices animals taking advantage of the berries of a suspected poison sumac plant, that doesn’t mean the plant is safe for handling. Even berries can transfer urushiol, the plant’s irritating oil, to the skin.

Remove poison sumac for good
A pro can help. Get free, no-commitment estimates from lawn care specialists near you.
Find a Pro

Poison sumac berries grow in loose clusters toward the base of the leaf and droop as the berries grow. The berries are tiny and not perfectly round. They have a squashed shape that bulges at the center, almost resembling a miniature watermelon, pumpkin, or avocado.

Each waxy-looking berry is a fruit of the poison sumac plant that contains a single seed capable of growing a new plant. When birds and other animals eat poison sumac berries or knock them off the plant, they help distribute the seeds. If seeds are brought to an area with sandy, acidic, or wet soil with a nearby water source, the seeds can germinate and grow into new poison sumac plants. But berries aren’t the only way poison sumac reproduces. It can also propagate through shoots that create clones of the parent plant.

The leaves turn from green to yellow-orange in the fall.

Poison sumac is a deciduous plant, which means it loses its leaves in the fall before going into a dormant, low-energy state for the winter. Before going bare, however, poison sumac’s leaves undergo a dramatic color change—from green to yellow, orange, or even red.

Poison sumac in your garden?
A pro can remove it for you. Get free, no-commitment estimates from lawn care specialists near you.
Find a Pro

Chlorophyll (a plant’s green pigment) drives photosynthesis during spring and summer, but these vibrant colors emerge when daylight hours become shorter and temperatures cool. The unique pigment compositions of each plant, along with environmental factors like rainfall and temperature swings, affect the plant’s fall colors, and fall foliage can vary year to year.

Although the beauty of poison sumac’s fall leaves makes close observation tempting, the plant is still poisonous. Even during the winter, when poison sumac is leafless, the plant contains— and can transmit—urushiol. The warm colors of poison sumac are best enjoyed from a distance.

Urushiol, the toxic oil of poison sumac, is a chemical that the plant uses as a defense mechanism. When poison sumac becomes damaged (either through eating or other contact), urushiol is released to ward off danger to the plant.

When urushiol is absorbed into human skin, the immune system reacts. Symptoms aren’t immediate, but within 24 to 72 hours, the areas that contacted oil will swell with an itchy rash. Once the rash breaks out, it can last for as long as three weeks and progress to bumps and blisters before it disappears.

Contrary to what some people believe, poison sumac rash isn’t contagious. It only comes from contact with the oil, which must be passed on from the plant or something in contact with the plant (e.g., clothing, yard tools, a pet’s fur). The best prevention is avoidance and thoroughly washing clothing, hands, and equipment after doing yard work.

Need a hand?
Some jobs are better left to the pros. Receive free, no-commitment estimate from licensed lawn service professionals near you.
Find Pros Now

Grow This, Not That: 12 Native Alternatives to Invasive Plants