A dull blade is a dangerous blade, which is why you need to keep tools sharp. Follow these steps to sharpen your chisels. 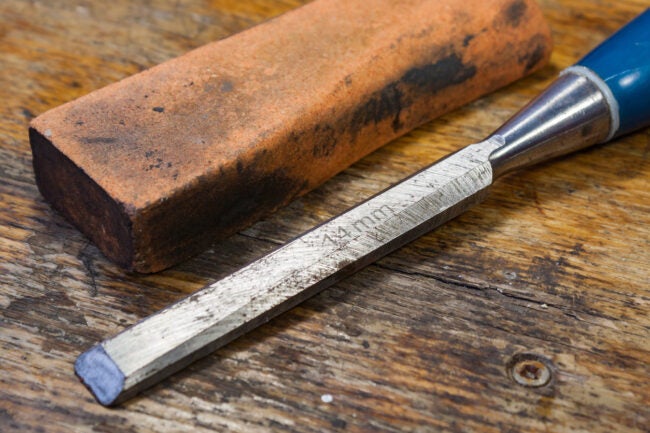 I know you’ve heard it before, but it’s true: sharp tools are safer tools.

The chisel is a perfect case in point. A dull chisel requires more force to drive; the greater the force applied, the greater the likelihood it’ll slip or skid out of the cavity you are shaping and cut you instead of the wood. Dull chisels also tend to crush rather than cut wood, so the work done with a dull chisel is noticeably inferior.

Keeping your wood chisels sharp is not difficult. Unless you use them frequently, you don’t even need to sharpen them more than once or twice a year, or perhaps even less. But that assumes they are kept in proper storage: if you protect their edges, they will require less sharpening.

When I was a boy, there was an ongoing argu­ment in my elementary school between the Ford followers and the Chevy devotees. The discussion was not charac­terized by the expression of complex thought; it was usually a matter of one side in­sisting, “Fords are better” and the other countering, “No way, Chevys are the best.” Needless to say, the dispute has yet to be resolved.

A similar perennial argument goes on among the honing and sharpening crowd. There battle lines are drawn between the water-stoners and the oil-stoners: the former use water as the lubricant, while oil-stoners use petroleum-based cutting oil to aid sharpening. Which kind of stone is preferable?

For a while, I thought the oil-stoners had the upper hand, with their conviction that the Arkansas stone was the ultimate in sharpening stones. But in recent years, the wet-stoners have weighed in with the Japanese water-stones, which are excellent.

For me, it comes down to this: in order to sharpen scissors, knives, chisels, or any other hand-cutting tool you need a sharpening stone. That’s a given. And you need to do it right, with proper prepara­tion, patience, and procedure. I’ll leave the resolution of which stone is best to others.

I suggest you buy a high-quality common sharpening stone and use it well, taking whichever side of the argu­ment you wish. Experiment with both, if you like. But use and store the stone with the same care you lavish on your chisels.

Start by lubri­cating the stone according to the instructions that come with it.

Make sure the stone is clean before begin­ning the honing.

Most sharpening stones have two faces, one coarse and one fine. You’ll start with the coarse stone and then proceed to the fine surface. Use the entire surface of the stone. Too many strokes in the same area of the stone will cause it to wear unevenly, per­haps leaving a hollow that will sharpen edges unevenly.

The stone will have caused a small amount of the blade to extend beyond the back of the chisel, forming a slight burr. To remove it, turn the chisel onto its back (bevel side up) and hold it flush to the fine stone surface. Slide it back and forth a few times, taking care to keep the back flat on the stone surface.

Some people favor a thorough stropping at this stage, which is draw­ing the blade of the chisel across a leather surface that has had a polishing compound applied. A few stropping strokes certainly won’t harm the blade, but aren’t essential.

After you have completed the sharpening process, wipe off any residue from the stone with a clean cloth.

Optional: A step favored by some is the addition of a second, steeper bevel at the tip of the blade. Only a few strokes on the finest stone are necessary, with the tip held at a pitch that is perhaps five degrees steeper than the previous whet­ting. Again, this is optional and, for the novice sharpener, an unnecessary complication.

Unless there are nicks in the tool or its edge has become flattened by many honings, there is usually no need to grind the edge on a wheel. If it is neces­sary, use a grinding jig to hold the blade at the precise angle of the bevel. Press the chisel gently against the wheel, moving it back and forth across the face of the stone, applying pressure evenly.What About Plane Irons?

The chisel-like blades in hand planes, called plane irons, are shar­pened in much the same way as chisels. Follow the same pro­cedure, except that the angle at which the plane iron is presented to the stone should be higher in jack or jointer planes (perhaps forty-five degrees) or lower for block plane irons (around twenty degrees). Match the original angle as closely as you can.